Let's talk about the main passive income in BDO: workers. It's passive in the sense that you have to do a few clicks to maintain it. It's not at all passive to build it as you must discover the proper nodes and get the contribution points (more about that later). Let's start with the basics: every city and major town (Olvia, Velia, Heidel, Glish, Calpheon city, Keplan, Trent, Epheria Port, Tarif and Altinova) is a "free node" that you can use to connect other nodes. They also come with their own separate warehouses and with one worker slot. If you connect the town with a node with resources and with the resources itself, you can send the worker to harvest that resource. Visit the node manager in the world and choose node management to spend your contribution points. 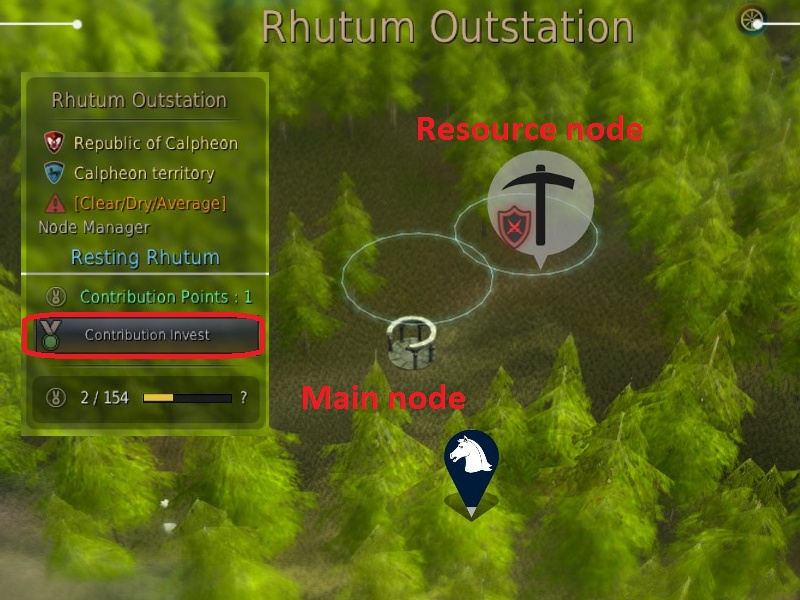 Then click on the resource and select your worker to harvest it for your warehouse. The worker lives in the town and exist in the game world. He walks out from the warehouse to the node, does the work and walks back like this little goblin from Tarif (town) to Kamasilve (work node): 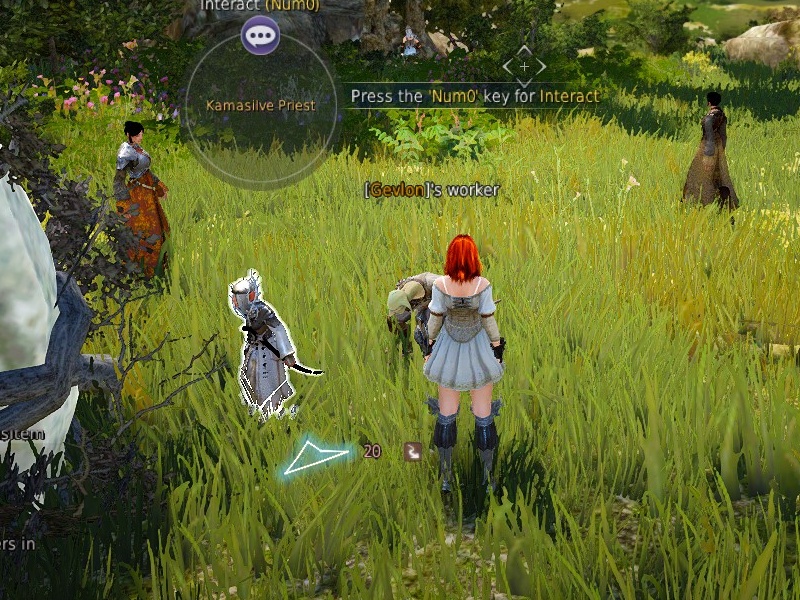 Pick the resources based on their market value and don't miss on the "excavation" resources which provide rare crafting items. Their locations are: Bernianto farm, Lynch farm ruins, Mansha forest, Rhua tree stub, Glish ruins, Ancient stone chamber. You must pay 35 energy to "find" them and then normally activate. Work happens in cycles. The cycle length depends on the work and travel speed of the worker and the distance of the node from the town. The node must be connected to that town, not to another. The workers have 4 main stats: 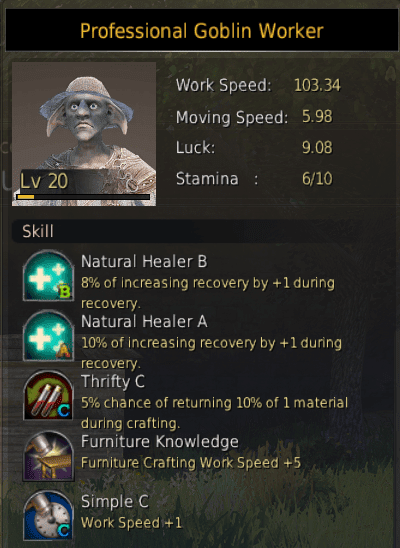 There are three races: goblins run and work fast but have very few cycles. Giants work slow but have many cycles. Humans are in-between. The most important thing is that work cycles only start when the character is online. So if you just play a few hours and log off, you must go for goblins to get the most work during those hours. But goblins can run out of cycles in 4 hours, so if you can let your computer running while working or asleep, go for humans or giants. The longer you are away, the more you should rely on giants. Also the nodes themselves matter: I have nodes that are 25 mins/cycle for a giant and nodes that are over two hours for a goblin.

You can hire additional workers if you rent houses. You can see which ones can be used by selecting "lodging". These houses often cost several contribution points and demand other houses to be rent before them. You can use these forced houses for storage or residence. Some houses can be upgraded with money to make room for two workers. However such expensive monstrocities can be actually cheaper than the 1 point little houses, like my Calpheon complex that feature the following "rooms", which you can buy only from ascending numbers: 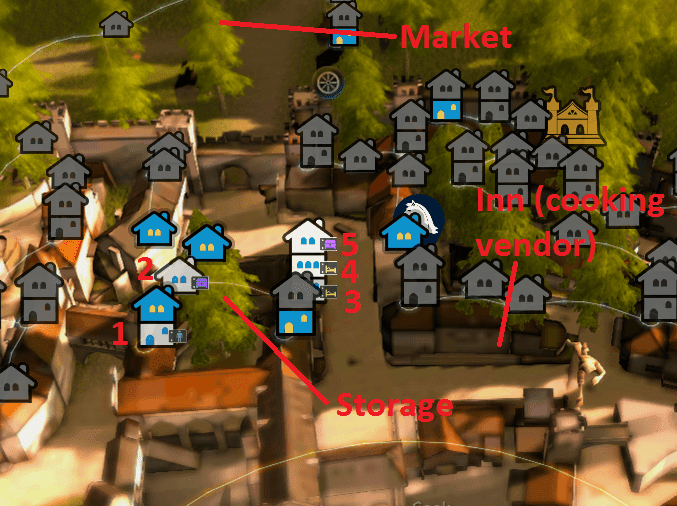 All together 7 workers (counting the residence as lodging) and 17 storage slots. Since a simple building provides for 1 worker or 3 slots, this complex is equivalent to 12.66 simple buildings, but only costs 10 contribution points. You can't buy lodging for one town in another. Don't ignore the nearby farms and villages, because they are often cheaper. For example the cheapest way to get two lodging in Trent is grabbing two huts in Behr: 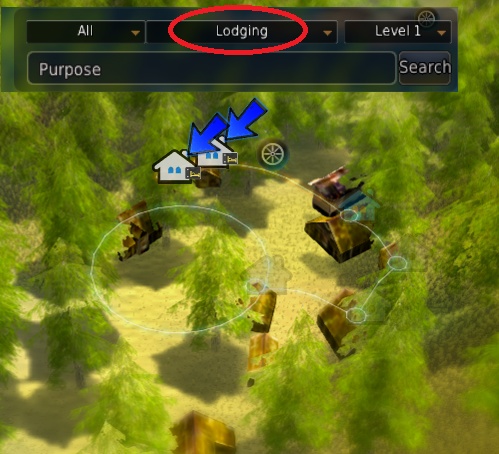 Workers come in 5 levels: naive, general (green), skilled (blue), pro (yellow) and artisan (orange). You can go to the worker manager of every town and view a worker for 5 energy. You can hire him or not. Sometimes you get naive ones, they are useless. You usually get green workers. Sometimes you get blue. With a few % chance you can get a yellow. I've never seen an orange. How do you get high quality workers then? On the worker exchange! Other players who are downsizing their farms, kicking blues to get yellows or simply dumb sell their old workers. You can buy a high level blue for about 300K, a price he earns in a week. Due to this feature I have 1 orange, 20 yellow and 23 blue workers, one week after starting the industry. Check the exchange often to see good bargains. It's worth to have an extra lodging space in every town to instantly be able to buy a new worker. You can sell the old later.

Workers also level from one to 30, gaining speed and special abilities that also affect speed. Look for farming (node work speed), overall work speed, travel speed and luck ones. Workers have the chance to be promoted. Promotion exam takes a day and only one worker can take it at a time. If he passes, he gets one color up, level one again and skill reset. Obviously you should try to promote the highest color promotable first, if there are more options, pick the one with worse skills! 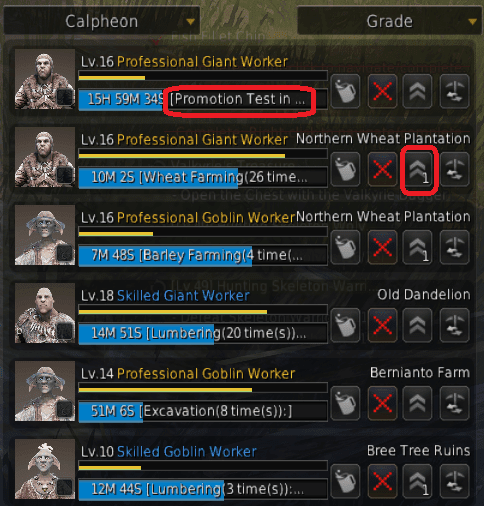 After the worker finished his cycles, he needs refreshing. You can refresh them all with a click on the bottom of the interface, if you have beer (or other worker food) in your inventory. Lots of beer! A beer is good for 2 cycles and a good goblin finishes that in an hour. Giants are slower, but still, my workers drink around 700 beers a day! That's why I need a brewery! One last trick. If you leave your computer on, an hour before going to bed or work, cancel all workers. This does not stop them from finishing their cycle, but from starting a new one. So you get all your workers back, you can replenish them, so they work all their available cycles while you're away.

Finally, your wares will be in several different storages. But let's that be the post for tomorrow.

Oh wait! I forgot the most important, the profit. Despite my workers are new and so am I, I'm pulling over a million profit a day.
at 03:00

Having Calpheon as base is kinda bad, the city is too big and there is only Birch Timber node which is somewhat interesting.

All the good nodes (Lynch Farm Ruins, Ancient Stone Chamber...) are way too far away.

And wheat and barley for beer and also Beriarto Farm ruins. Also, I use EVERY city.

One tip you may have missed: Humans can get "Luck" as a skill, which provides extra chance to create better quality items when crafting and upgrading equipment. So if you ever go into that, go grab some humans.

"so if you can let your computer running while working or asleep, go for humans or giants."

Why do developers implement such stupid mechanics? Do they secretly get money from electricity companies? I just don't understand ...

From what I understand, there are a limited number of houses to rent, several thousand per server. You have 5 in that city alone.

Your project could be to own them all and be BDO's slumlord.

So, your workers are seen as they travel to and fro. Can you see everyone's workers? What about your horse and boat? Do they clog up the towns / docks?

@Hanura: boosting concurrent user numbers. Just like why AFK hauling and ratting is possible in EVE.

@Smokeman: houses are instanced, everyone can own any. Actually you can visit anyone's house to check out the furniture.