You probably heard of the MMO EVE Online. The only MMO with meaningful PVP, the only without rails and many other "only" qualities. You might think of trying it out. Don't! I was a prominent player and author of a top 5 traffic EVE fansite, so I can help you avoid the troubles I got. Just stay away!

No, it's not the game itself, it's everything promised and more. And if it would stand alone, I'd play enthusiastically and recommend it to everyone. Unfortunately, it also has a culture. Of course most of the players are not responsible of this culture, but victims of it, like I was, like you would be if you'd play. This culture is the most obnoxious one I've met on the internet. No, I'm not simply talking about racist "jokes", calling farmers "jews", using "ur gay" as standard term for "you made a mistake" or calling PvP "rape". Granted, this official battle report on the highest traffic fansite probably explains why only 5% of the players are female, despite the game content has no sexism: 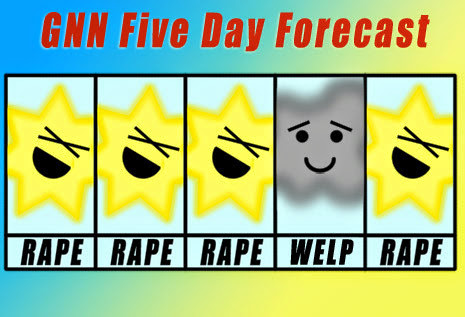 No, this is the internet and you should have a thick skin and a finger ready to click "block" on despicable people. A few disgusting people should not drive you out of any activity.

I'm talking about doxxing, tricking people into humiliating acts and uploading to youtube, rallying audience to bully someone to suicide as official player gathering presentation, blackmailing developers, vandalizing public property, bullying someone so hard that his wife gets panic attack, hacking third party sites, mass-following a streamer with user names referring to her recently dead relative, celebrating a terrorist attack which had an EVE player among its victims, placing Nazi symbols on their ships on official events, faking suicide to scam helpful people and so on.

The thing is that some people take this game "too seriously". And not just by being carried away in the heat of a battle. Many people earn their real world income from the game. I know that there are RMT-ers everywhere, but this is different. Here people completely openly do that, offering literal yacht parties for those who help them. The most prominent third party site SomerBlink was openly offering in-game currency for real money. Leading groups openly having policies "don't report botters". Editorial in the highest traffic EVE fansite clearly states "I’m not the kind of guy that will judge you for RMTing - it’s not my business and I don’t care what you do with your stuff". If you play EVE competitively, you can easily get into a situation where your victory threatens someone's mortgage. Such man will not play nicely!

The trivial question is where the hell is the company? Why don't they ban all these disgusting haters, RMT-ers and criminals?! We are talking about a few dozen bad eggs ruining the entertainment of hundreds of thousands and preventing EVE from having millions of subscribers. Well, ladies and gentlemen, meet the head of the community department: 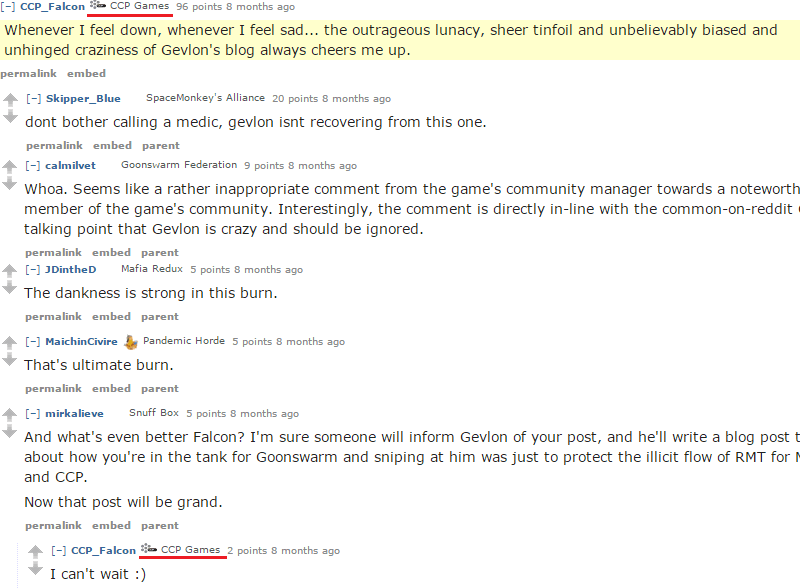 Yep, this is the community manager, starting his cyberbully campaign against me with his official account. What did I do to deserve it? Posted a victory report for my team and outlined future in-game plans. Could you imagine something like that in WoW after posting a new boss strategy, even a horribly bad one? (Not like it would matter, but the strategy worked and the enemy is now destroyed.)

But you know what's funnier? Later he went on with more cyberbully and I retaliated by finding posts testifying that he personally saved the mentioned vandals from justice (fun fact: the vandals tried to frame it on me), lied to the media and the community to protect their "honor" and let them back to the game. The vandal now brags about it and gives advice how to do more damage! After that I started to call him a corrupted supporter of one in-game group, ready to do anything for them. And the company as an entity didn't think they should do something about any of it. Somehow CCP games as a company was completely fine with their community manager running a cyberbully campaign against a top 5 fansite author and the latter calling him a corrupted supporter of criminals. He wasn't fired or forced to apologize. I wasn't banned, despite claiming developer favoritism is against the EULA. Just another day in EVE Online.

EVE is Zimbardo Online, a prime example what happens when a bunch of predominantly young males get into a situation where some need to supervise others without proper training, structure and accountability. Those who are sadistic or aggressive enough float to the top. Those who are modest are eaten. Another dev CCP Fozzie received extreme amount of harassment from monetizing "players" for his game design (which turned out to be a huge success later). He received no protection from the company. Both players and developers are free to abuse anyone and the company as a whole does nothing. Hell, player abuse and public humiliation is the "tradition" of the Alliance Panel of the official fan gathering "fanfest". Both players and developers are free to make their money on the side at the expense of CCP intellectual property and the company does nothing. For example Somerblink received valuable items from devs which they surely also RMT-ed, just weeks before public outrage forced CCP to stop the Somer RMT operations. After they were finally cleansed, I Want ISK took their place of "casino" operation. They were also caught RMTing, but their bans were overruled, despite the head of security insisted that they were guilty. Falcon and his boss were openly campaigning for the success of a $150000 kickstarter of a book about EVE, published by a "media corporation" with zero experience in book publishing, ran by an in-game group (the same one that vandalized).

In short: if you play EVE and get any successful in it, you will likely be harassed, doxxed, publicly humiliated by monetizing "players" and corrupted - or simply sadistic - developers. The company will do nothing. Sure, you can play for years without any real world harassment, as long as you suck and no one cares what you do. A lone farmer or a frigate (lowest risk) duel seeker makes no waves. But one day you do something extraordinary and then you get a blackmail "do this or that ingame or your boss will get mass calls with slander".

Let's add that game development is often corrupted to cater to groups with access to devs. Not just in secret venues. The official player council, CSM was corrupted to the point where candidates openly campaign with nerfs and buffs: "vote for me and I'll lobby to buff you and nerf your enemies", while their purpose is obviously to represent the playerbase as a whole. Player groups openly lobby for game-breaking designs that cater to them and hurt their enemies. Of course there is even more covert lobbying and corruption. While "don't nerf me bro" is a parody in WoW, it's the reality in EVE.

It's possible to win against all this, just by playing well, but it's extremely unfun. The largest game-monetizing crew was just defeated by a rally of practically all players who hate their schemes (following the plan that got me the cyberbully from the community manager). I "HTFU"-ed and kept "playing" until my enemies were defeated exactly to not be dimissable as "crying over lost pixels". I leave only now, when the table turned, when the same community manager is harassing my in-game enemies, banning them from running to CSM (he banned me too earlier while open racists were fine to run), putting our narrative into official game material. We won, we are now the cool guys, the devs are hanging out with us. Now we are the "seniors" who can to push the head of the freshmen to the toilet. Instead of joining that, I quit now and say that this culture is completely unacceptable and you should stay away from it.

The page can be commented at the post announcing it.