Do not play Albion Online

Another sad piece in the series about games that could have been awesome if the publisher company - or individual corrupted devs wouldn't rig it for more money.

Albion Online is still in beta when I'm writing this, so several of its problems can be addressed later. But the gold speculation issue would be so easy to fix and serve absolutely no in-game or even legitimate monetization goals that it cannot be overlooked. Its continued existence made me sure that some Albion devs are corrupt, are in league with goldsellers, therefore I strongly recommend you to avoid this game.

Gold is the "premium currency" of the game, you can buy 1000 gold for about $5. You can use it for subscription of the game, 2500 per month. You can freely trade it for in-game currency (silver that you can farm), like WoW token. What's the problem? 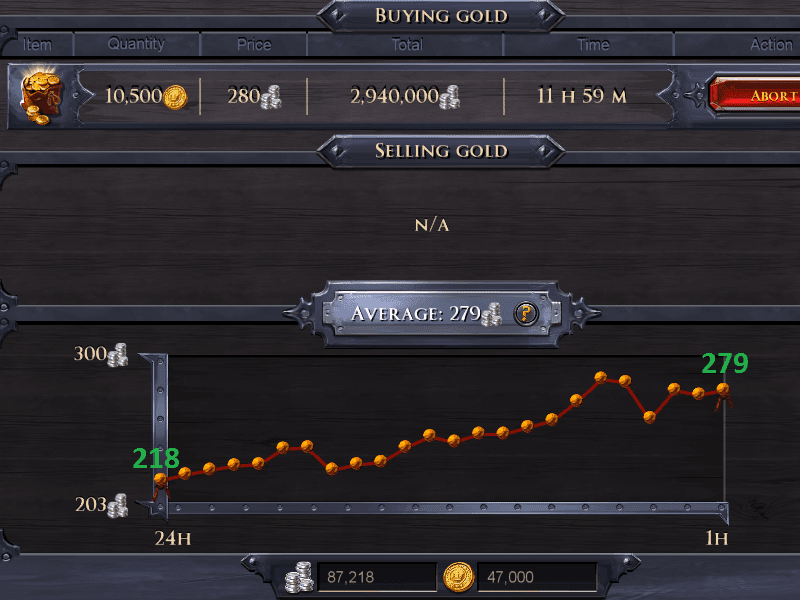 That's 25% increase of gold price in a single day, and not on day one of the MMO. Anyone seeing this coming could increase his in-game wealth by 25% without even logging in. No need to explain how big goldmine this is for goldsellers if they can guess how the prices will move - or get inside info from the developers who have all the marketing data about the gold buying (supply) and gold using (demand) behavior of the players.

"But, but, but free market". I'm all for free market in-game. Gold is not an in-game item, you can't use it for anything else but buying subscription and cosmetic items. Gold is essentially coupon to buy real-world commodity: subscription to a video game. It has a clear, official $ value.

"But goldsellers can speculate on swords too and make silver and buy gold legally and sell it". Gold is very different from in-game swords and other items because: Fixing it would be trivial for the devs. There are several methods suggested: Let's summarize gold speculation: This means that it's existence is the sign of ill will of some devs who are in league with the goldsellers, giving them insider tips (about marketing data or incoming developer intervention) how to speculate and then split the money made by selling gold. Such developers will surely rig other things, especially those that risk their illicit income. There is no point playing a game where the "gods" are simple thieves.

PS: even if the devs are innocent and all the gold speculators are speculating for challenge and not for RMT, the game is still a one dimensional one where only your gold speculation skills matter and these skills are about predicting the real world payment schedules of of people. Why would anyone play this game?