To avoid the endless discussion about what is pay to win, let's not use the clickbait title any more and use "pay for advantage" that covers all kind of cash shop purchase that make you stronger, increase resource acquisition rate or give you resources.

This page isn't the n+1-th rant about pay for advantage, it discusses objective results on the field. The most important result is about the EVE Online skillpoint trading. Skillpoints in EVE allows you to access more ships or give bonuses to fly these ships in the form of percentage power increase. So it can be translated to "level" of other MMOs and having more is obviously an advantage. It is crucial to understand that while EVE is formally a subscription MMO, it allows players to get 30 days playtime by activating the in-game item PLEX which is available in the cash shop and can be sold on the in-game marketplace for in-game credits. PLEX trading preceded skillpoint trading by years and had a stable market. Either as a "farm to play" or a "pay to play" player, you can get PLEX or its market price in credits.

Then skill trading was introduced allowing players to use a cash shop item to extract skillpoints from their avatar and then sell a package of skillpoints on the marketplace for in-game credits. The buyer could inject these skillpoints without further purchase. The cash shop extractor itself is also for sale on the marketplace, so "farm to play" players can also access it. Soon after the introduction, the price stabilized around the market equilibrium: an extractor is available for 0.24 PLEX and a skill package is available for 0.6 PLEX.

Where is the groundbreaking result? One month of subscription (which is available for one PLEX) gives you one month of game access and 4-5 packages worth of skillpoints (depending on your current skillpoint count) in the form of offline training. The market (the whole playerbase) values getting 1.5 package now equal to 4-5 packages over a month and game access. This extreme equilibrium can only be explained if we accept that the average player wants to buy power right now and ready to use his $ or farmed credits for it, rather than use it for subscription.

This also creates the strange situation that if you buy a PLEX and gather 4 packages worth of skillpoints over a month and buy 4 skill extractors, you can create 4 injectors and sell them, getting 4*0.6-1-4*0.24 = 0.44 PLEX! Since creating the extractors needs only a few clicks, it's not "play for farm", it's "play for free and get a little power". The average player values game access to less than zero, a free player gets a little amount of power for free, just for playing. This means that subscription model is dead. Please understand that it's not a few whales skewing the results. If there there were enough free players who are fine with just playing the game and sell their skillpoints, the price wouldn't be this high. But no, non-payers aren't giving up on power, they just prefer to get it by farming. It's "everyone" who want to buy power and consider the game access worthless and the pro-subscriber player is just as big outlier as the whale! He is just more loud.

The result is unquestionable: the dev has no other option than selling power items to the players. You can cry, you can whine, you can change all the guild icons to P2W, it counts for nothing. You are a tiny minority and the majority just want to buy the privilege of winning. The devs aren't evil or greedy or want a cash-grab. The MMO scene started with $15/month subscription for everyone, a fair and completely P2W-free scheme. And then the players started to buy power from illicit sellers, even at the risk of being banned. This is another proof: players rather lose their account than play without purchased power. So the players forced the devs to give up on the fair subscription model and start to either sell power in the cash shop or allow players to trade subscription token for in-game credits. Please note that these methods (illicit RMT, cash shop and token trade) are equal for the buying player, while cash shop is clearly the best for the devs. 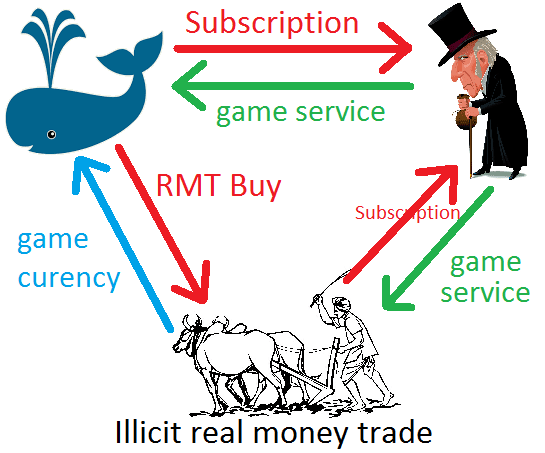 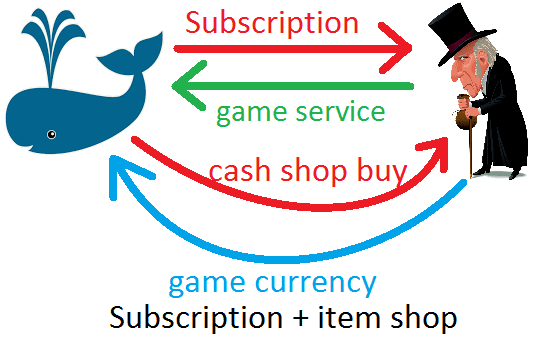 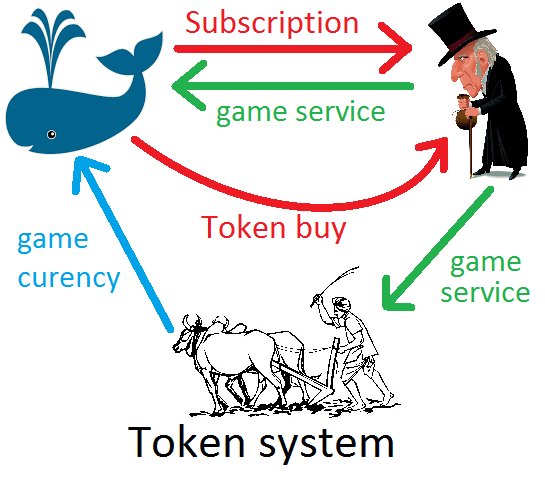 Trying to do token trade is a desperate last stand of the devs to keep some fairness in the game against the will of the players. If they wanted cash-grab, they would just sell in-game credits in the shop for rates that would dwarf farming. Yet they get constant abuse from the "fairness" minority. Unfortunately this minority isn't big enough to upkeep even a single subscription + cosmetic shop server, otherwise devs would make one for them.

There is another evidence for the pay-for-advantage preference of players: Star Citizen. In this game players buy various ships that gives them advantage over those who have no ships. Except there is no game! Star Citizens is in constant delay, there are doubts that it will ever be published and still, "players" are buying power! I can't imagine more obvious proof that players don't even want to play the game, they want advantage over other players and either pay for it or spend time doing hateful activity (grinding) in the game for hours, just to "pwn" others. Both are against the spirit of fair play, but this is the last thing the players care about.

How come that "everyone" is for fairness? Because unfairness isn't socially acceptable. Both the free player who is ready to farm for tokens and the whale is a loud supporter of fairness, they won't identify themselves as freeloaders and power buying cheaters on the forum, just at the anonymity of the cash shop.