Minipost: they can make decent female armor after all 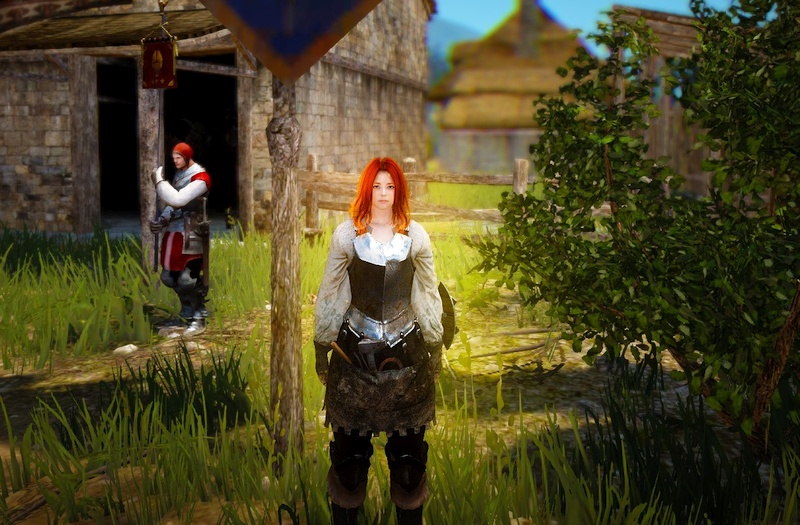 Too bad that this is crafting gear. But even with the tools in the belt it looks much more "medieval fighter" than the default stripper outfits.

PS: I had the first gank attempts yesterday. In absence of goals in PvP and minimal damage (no XP loss if you die in PvP) it seems that ganking isn't more prevalent than on WoW PvP servers. I was in half HP, with a dozen mobs, he had a gillie suit and I still got away. He was probably drunk, kid, retarded or some combination of the above.
at 03:00

Speaking of crafting it would be nice to see crafting systems that offer you
to choose the look of your armor/items and apply a suitable set of enhancements to
it that is on par with other sources of endgame loot - like for example
the Crafting System in The Elder Scrolls V - Skyrim.

Your ganking experience is just a single data point and there are noobs in every
area of a game so will see...

Can you steal other people items if you kill them in PvP?

No, otherwise goldsellers would use it to transfer items.

Reputedly, you *can* steal trade items - specifically, fish - if you gank someone carrying them. At least, I've seen that argument used to justify ganking AFK-fishers.

My ganking experience is similar to yours: only happened once while grinding (twice while AFK fishing over the last 2 months); when it did happen I ran away, the ganker didn't pursue me. I'm told that on the US servers it is a different story: traders and horse trainers being routinely ganked; but on the EU servers, yeah, ganking is not really a problem.

In terms of ganking, the karma cost to do so is very high: it costs 10k karma to attack someone, and 60k karma if you kill them (none if it's self-defence). You have a maximum of 300k karma, and you increase it by maximum 68 karma (yes, no digits missing: actually sixty-eight karma) with each mob you kill. Being negative karma means being no longer able to use cities *and* you can be killed on sight by any player without that player having to flag for pvp *and* your chance of losing items on death (including enchanting levels on your weapons and armour, and black stones you are carrying) gets higher the more negative your karma is. So one gank = approx 10,000 mobs to grind, and if you're negative karma, that means grinding mobs where no-one can see you - ie, where spawns are few and far between. So no, ganking is not really a huge risk.
On the question of female armour (which is ONLY a problem for the Valkyrie and the store armours; *ALL* the in-game armours for Sorceresses, Witches, Maehwas and Tamers are modest and reveal no skin): yes, the crafting costumes are really nice, and when the store item is introduced that allows you to convert a crafting outfit to a cosmetic costume, I'll be buying multiple such things. The Calpheon Noble costumes are *really* nice.

to add to what seanas said. here the whole engagement system in a picture from CM_Jouska
http://forum.blackdesertonline.com/index.php?/topic/8044-updated-v20-bounty-hunters-karma-and-flagging-discussion/

I would like some ingame costume option. Sure I will give DAUM some more money in the future, but the costumes are really expensive and way to skimpy for my taste..