I promised the big AFK farm post, but I forgot that I didn't even talk about the weird economy of BDO and it must be understood before we talk about implementations.

Above all: you can't give anything of value to other players, which rules out influencing other players with money. You can't hire mercenaries. So you can only use money to improve your own stats, which has diminishing returns as will be described below. I don't know what will be the project in BDO (if any), but I'm sure as hell that its success won't depend on +1% crit chance. So spending lot of effort on making money, just to improve your gear a little is dumb and only leads to burnout. Therefore the goal of the "get rich in BDO" plan isn't to get on the wealth toplist, but to always be able to buy whatever you need with minimal time commitment after setting everything up. 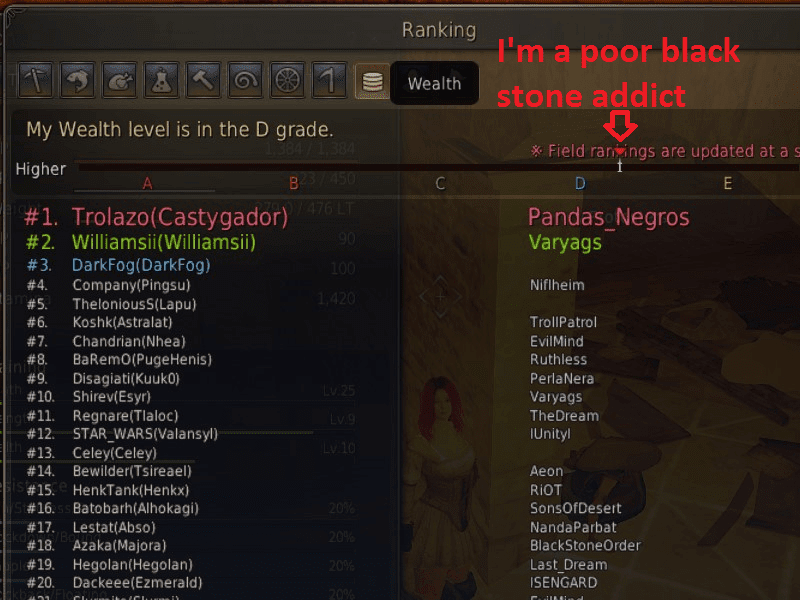 Unfortunately the good old arbitrage trading is out of the picture, due to the 35% tax, single marketplace and regulated prices. Of course it doesn't mean that you shouldn't use the marketplace to buy items that are cheaper to buy than to hassle with to create. Also you should sell your products. Players usually give better deals than NPCs, just check the horse market where good horses can be purchased below starting horse price (and someone pays for your starting horse)! But buying something just to sell again, maybe after a trivial crafting is impossible with lasting and significant profit.

What are the black stones? BDO has a very strange itemization. Everyone uses simple craftable items and improves them via black stones. Black stones come from farming monsters, but of course we don't want to do that, but buy the black stones of other people who probably stockpile coins to get high on that toplist, or spend on materials to get on another toplist. Still, if stones drop for you, don't sell them! 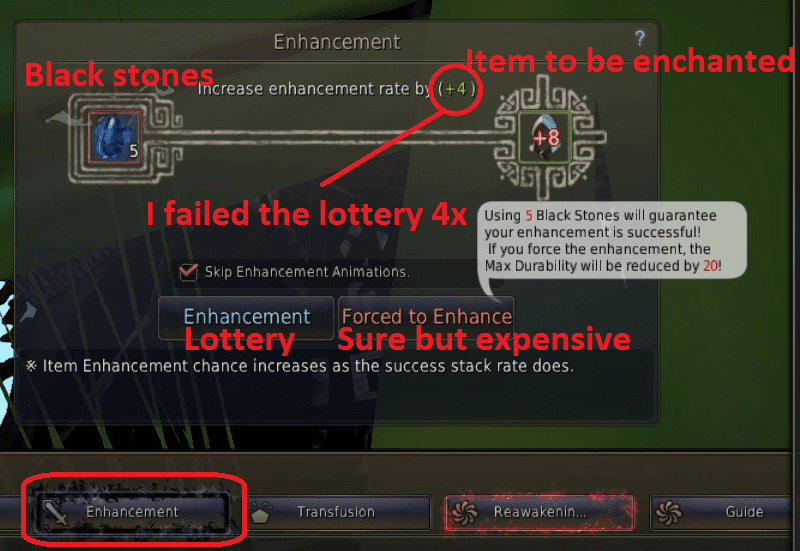 The higher the item is enchanted, the more stones are needed for the next enchant, so creating a high-level item is very expensive. Also, when the enchant fails, the max durability of the item drops, and restoring it needs an unenchanted version of the item, so enchanting serves also as an items sink. 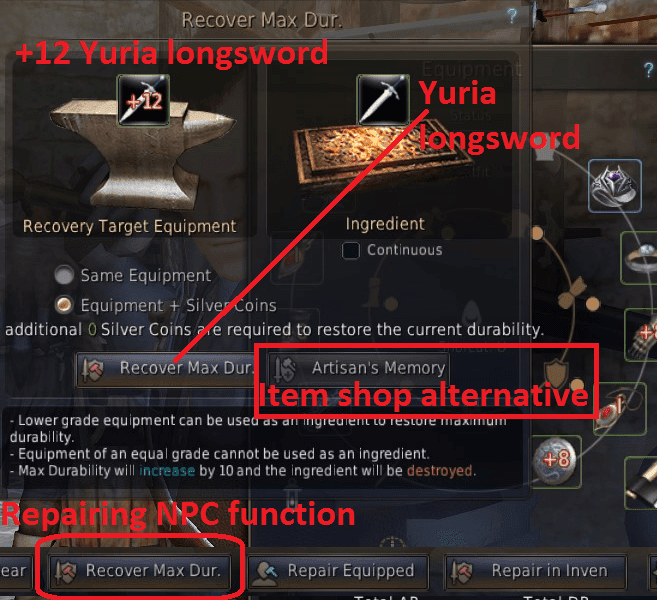 There is one trick to save some money: you see that encircled number? Every time you fail an enchant, it increases, providing a buff for the next enchant, until that finally succeeds when the buff resets. After the items reach +10 level, you often see that buff over 10 too. The trick is to start enchanting an armor piece with armor black stones. If you succeed, be happy. If you fail and the buff reaches 10, switch to enchanting weapons. The reason is that weapon stones cost 50% more, so let's save them from low-buff tries. Actually, you can save even more by using cheap rings and belts to enchant from zero to 4-5. If you get an enchanted ring, be happy and sell it. If it fails, enjoy your enchanting buff.

So to summarize: in BDO you can only spend your money on your gear, typically black stones and due to diminishing returns, there is little reason to go crazy with moneymaking. We need a low effort income source that pays for daily expenses and a dozen of stones a week, so we can focus on whatever we want to do in BDO.

It's a little bit sad to see that player interactions are reduced to the minimum...

I've posted the enchantment stats on my blog if you need them.

When you hit 50, you start getting Hunter quests and daily/weekly Boss Scrolls, which you need to do in grp (otherwise it's a waste), full grp, everyone 6+1 scrolls = ~100 Hunter Seals which 2 = Armor blackstone, 3 = Weapon blackstone, plus also plenty of blackstone drops, vendor crap and chance for boss armors.

Also, many ppl make the initial failstacks with cheap jewelry (like to +3), then hammer armor. Failstacks are character based, if you are trying to go from +11 to +12 and already went over eg. 15 failstacks, better switch char and save these failstacks for when you need to go higher.

@Destabilizator: you get hunter seals from bosses of other people? That's horribly broken.
I did my hunter quests and soloed the bosses as I thought forming a group would take more time than killing the boss. I never imagined that I could get seals/loot from the kills of others.

It also means that everyone needs to be in an active guild where he can find such full group.

There are random groups for multiple bosses forming on channel-wide (and sometimes server-wdie via megaphone) chat all the time, with very little scamming involved.

A decent guild is still more handy for that though. That, or a group of friends to do them with on pre-set days (every week works fine).

Sure you lose some time trying to herd the cats, but each killed boss of other players yields loot, so you basically multiply the worth of each of your scrolls at least twice. Hardcore guilds actually have rules saying you have to do scrolls in guild groups only.

You only need to be in a group if you want to farm lots of daily boss scrolls. I farm my own dailies solo, but then I buy most of my gear from the Auction House - it's much more cost-effective, I find, to grind money in a way I enjoy (trading, in large part) and let other people pay the risk-premium from upgrading gear to +15. The capped pricing of the AH means that the seller can't factor the risk premium into their prices, which is why people selling end-products (eg, +15 stuff, T7 horses) complain so much about the pricing system.

In terms of making money, I craft Calpheon wooden boxes in Epheria port and drive them to Altinova (or Abun, if the prices are better), and backhaul Special Sunflower crates the other way (I craft the Sunflower crates in Altinova). It's unlikely the fastest money making method, but it's enjoyable and its pure profit other than the energy invested in processing logs.

Other efficient money making methods: selling intermediate Alchemy materials seems to make good money for the time and energy invested; although it's not something I've done yet.

Selling the rare drops from production nodes makes good money as well - this is something I do a lot of. Powder of Earth sells super fast, as do some of the Traces. However, the tree node rare drops/byproducts sell the best: Bloody Tree Knots, Monk's Branch, Old Tree Bark, Spirit's Leaf. They're all needed for Alchemy, they all come from Tree production nodes, and they all sell (at max peice, of course) as fast as my workers can harvest them.

"We need a low effort income source that pays for daily expenses and a dozen of stones a week, so we can focus on whatever we want to do in BDO"

That's what I have been doing from the start. I'm really snickering at the people that are now complaining that they cant spend all their hard ground silver on items they want to buy. You are right that you only need so much money in BDO at the moment and earning more is just a waste.

This does however give you the opportunity to do things you like to do in game with your time. (For me that is life skills, exploration and crafting/node management)

Fishing has a nice side income for some afk time and the keys you fish up can get you at least 1 black stone per 3 chests you open. Another source of afk income is farming rare drops with workers from nodes (at around 14k per rare drop per worker gather) High luck workers can get several of these per gather.

As a followup, I decided to record my costs making Calpheon wood boxes tonight. I've just processed 300 Birch, 300 Fir and 300 Cedar timber (approx 150 silver per timber on Mediah C1 at this moment) into enough plyuwood to (just) make 4 Calpheon wooden boxes. Approx material cost: 135k (before tax) for the wood if I sold it on the AH, 4k for 4x blackstone powders (I make them by grinding the cheapest crystals, at 5,250 silver; I average 5-7 powders per crystal). It cost me 154 energy to chop everything.

It takes 2 hours (4 boxes at 30 mins per box) to make; I'll trade them in Altinova (or Abun, if the prices are low in Altinova) for 120k (or more) silver per box (after successful bargain). So, nearly 400k profit over selling the wood raw on the AH, and something north of 3k silver profit per energy invested.