Alts are a fact of MMOs. Even in EVE - where alts couldn't learn skillpoints for a decade - people had them via starting more accounts. There is nothing a developer can do about the will of the players to increase their strength via more characters. But I've never seen alts being integrated into the MMO World instead of just tolerating them.

In Black Desert Online, your account has a "family name", all your alts have this name, identifying you to other playes. Alts are indeed a family in-game, they share warehouses, knowledge (energy max), contribution points and farms (with their management), trade slots (and management), even daily quests. What is separate is their personal skills, personal inventory, storyline progress and energy regeneration (however as only one can be online, the rest have only 2 pt/hour). Obviously they have separate locations, so you can place them where they are wanted.

However these just make alts fun and immersive, not any useful. The useful feature is offline transportation. If you are in a city, you can travel to another while offline, by selecting disconnect at the menu. It doesn't disconnect you, but takes you to a screen where you see all your characters, active being highlighted. On its portrait there is a "transfer" button. Press it to select the target city and the next active character. This logs that character in, while making the old travel for an hour. When the time is up, he'll be in his new location. If you log in earlier, he'll be right where you left him. Of course if you have enough alts, you can set all of them in offline travel, one after the other, play your main and handle them when they arrive. So you never actually have to ride your mount from one town to another filled with wares.

If mount is near you when you visit the storage, all 3 inventories (your, storage, mount) open and you can fill your items directly to your mount. If you can't approach the storage mounted, leave the mount outside, walk in and left-click the mount icon to call it in. What kind of mount can carry that much cargo? 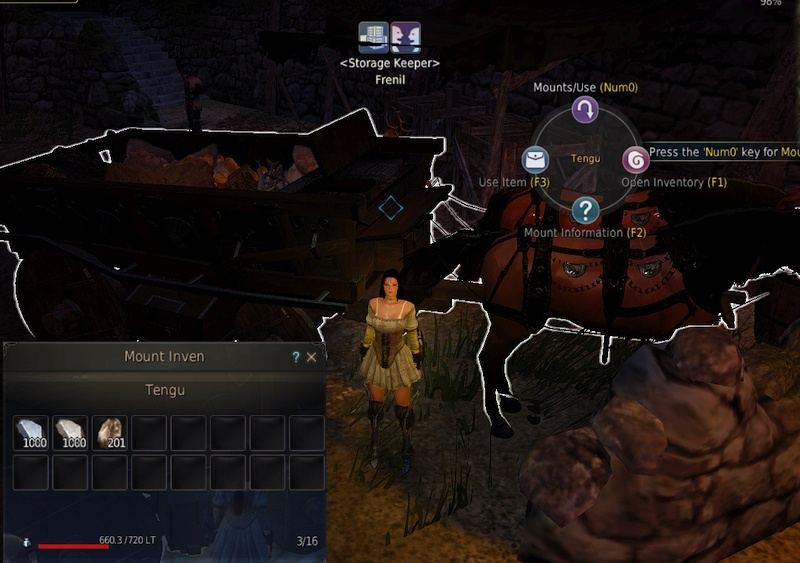 The trader carts are available on the marketplace for 700K. Register the emblem at a stablemaster, then connect it to a single horse, despite how many horses are animated (this is actually pretty dumb). Then you can take out the cart and use it as another mount.

The game also have a built in NPC transport system, you can remotely select a warehouse (click on city on map), press transport and you can set a destination and select cart (I don't know why ships are different): 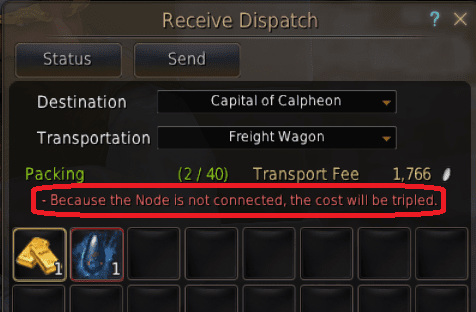 As you see, the problem is price. It's calculated by slot and wares have max stack size, so if you want to transport 3000 timbers, that's 6 stacks. The real problem is that the cities must be connected or the price is tripled. Connecting cities means investing contribution points into nodes you don't use instead of more farming nodes. So I'd only use this feature for transporting few odd items. Keep in mind that the warehouse must have money to pay this, it's not paid by your personal wallet.

So I stick to alts with carts for transportation. Alts have one more huge advantage: leveling them is the best way to get contribution points, since you can level very fast. Knowledge quests are instant complete. The combat quests are fast because most of the character power comes from gear and not levels or skillpoints. So just give your top gear to the alt by leaving it in the Olvia storage. Anything not oneshotted is a violent elite. I killed Red Nose with a single combo. Just don't leave the safe zones with your main without the gear, not even for daily quests or you'll get trolled.

The point is that you can speed-level an alt for very fast contribution points gain and then use it as a bankalt or cook or whatnot. Or you can just delete it and level a new one. Since the quest rewards are often trade emblems and crystals, it can even be recommended to new players: when your leveling slows down, just start a new alt to get more contribution points for farms and rewards for money which you can spend on black stones for the gear that will help your main a lot.

You always find new knowledge, the amity game is incremental: the more knowledge you have, the more options you have in the minigame, which leads to reaching more rare knowledges. While the little quests are shared, you always find new ones because there are so many. On my first alt I've found lots of quests and a farm right next to Heidel, with my next alt I've found a new town (Iliya Island), along with lots of new things that I missed first time.

Finally, you can try out crazy builds and learn about your class free of respeccing cost (real money) on an alt.

Some tips for alting: So while I was playing, my alts (actually while I was leveling my second alt, the first plus the main) collected most of the farm output to Heidel (I've sold several stacks locally during the week randomly): 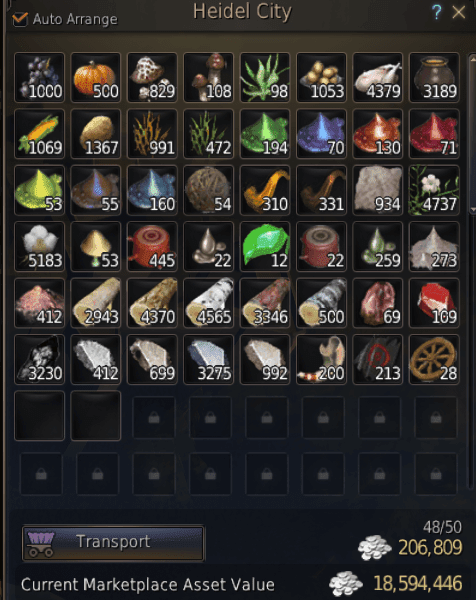 Your cart is named "Tengu" ? I hope you have good mods on it, be careful in Niarja !

heh... love the name of your cart: Tengu.

hey gevlon, hope you are well... thought you would get a chuckle out of this :) we also have a few stations named after you
Mass

What do you plan to do with the profits from the economy aspect? As BDO is instanced and not single-shard, what can you do to influence the game world?

The advantage of connecting more horses to carts and wagons (I think it goes as high as 4 or 6) is that you train all horses at once. It may not be relevant to your current trading, but keep it in mind.