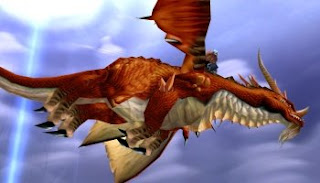 The glyph industry runs very well. Practically I'm the only supplier of Death Knight glyphs and the demand is insane. My current balance is 47700, and I pay for my own alt for flowers, so the flower business will have a nice result. So I made 1300G on a single day.
I'm a bit lost here. There was a huge inscription rush. Where are the inscribes? Why don't they sell their wares? Why don't they make profit? Are they so stupid to ignore their well-paying tradeskill just to reach lvl 80 a couple hours faster?

I usually don't whine about game design things, but Keristrassa is way over the limit. According to the questline she was imprisoned by Saragosa, we free them, help her kill Saragosa, help her attempt to kill Malygos, but finally she get captured and turned against us and we have to kill her. The epic feeling is a bit damaged by the fact that Coldarra is full of her. You can't make a step without bumping into a human or dragon form Keristrassa. This is ridicolus.

I'm still lvl 71 and done the first instance, Nexus, with an extremely noob group. The tank was the damage first, the second is me, but I "off"healed (healed more than the "real" healer). So watch out for noob groups!
at 07:50

How are frostweave prices at your server? Being a tailor I get decently much of it (once I got 7 pieces from one mob, yay!). Instead of using it I sell it. The current price for a stack seems to be 50 g. We'll se how it turns out in the long run, but right now my suggestion is to rather sell it than turn it in to bandages, if possible.

That's a great idea! People are powerleveling their tailoring and first aid and ready to pay insane amount of money for a stack (I sell them around 40G). 3-4 weeks from now they will be just as cheap as Neatherweave.

I think you've got it, people are so eager to race to level their talents they are ignoring the real money that can be made. I've held off leveling up tailoring until the demand for frostweave goes down. Currently I'm selling stacks of it daily from the mobs that drop it. Once the demand goes down I'll start purchasing the cloth to level my profession.

One of my guildmates has done the same thing I pointed out that he would make more money by selling the mats at an insane price now and level once the demand goes down. Of course, he didn't listen and now is crying the blues about only having 200G left, but according to him it's worth it.

You said that your alt was stationed at halaa for greater planar essences. Is there a vendor that sells them or do you just farm the mobs for greens and DE them? Thanks.

I'm assuming there is gear from Halaa that you can purchase that he disenchants. And the enchanting mats sell for more than the item costs. I'm not sure...I'll have to look into it...

Yep, I found the blog post where he talks about it