How to get to the top 0.5% in PUBG without being any good

So you are sitting around #10K and wonder how much more "skillz" you need to get higher? Do you believe that the top 10 have super-human reflexes dishing out headshots on the run? Do you watch streams hoping to learn tricks? Well, dude, you'll be greatly disappointed!

This was me a few days ago when I finished my experiment with a "l33t strat": 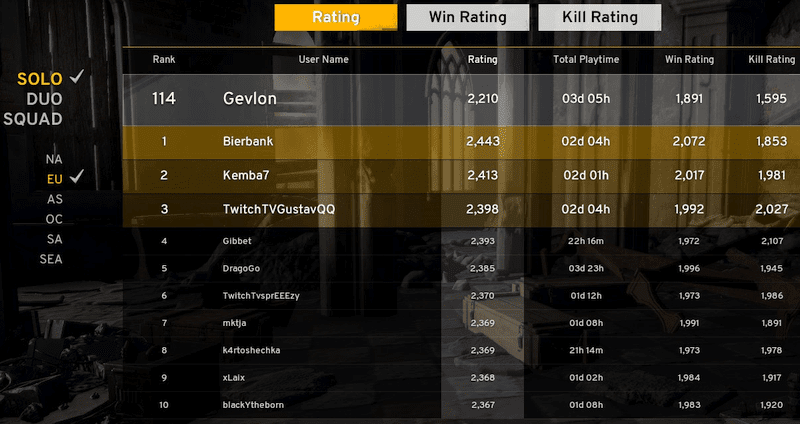 I'm still top 0.5%, despite now I'm down to #750 testing another method and that needs some polishing. What is that monster strategy that got me to the edge of top 100?!

I went to houses and collected medicine, bandage, first aid and medkits.

No, there is no next step, that's all. I was running around in some irrelevant corner collecting healing stuff. When I lost HP due to blue zone, I used medicine. When it wasn't enough, I used bandages. When that wasn't enough because after the 5th circle the blue hit hard, I used first aid kit or medkit. When I ran out of them, I died... as top 10, every single time. So game after game I finished in the top 10, gaining rating. 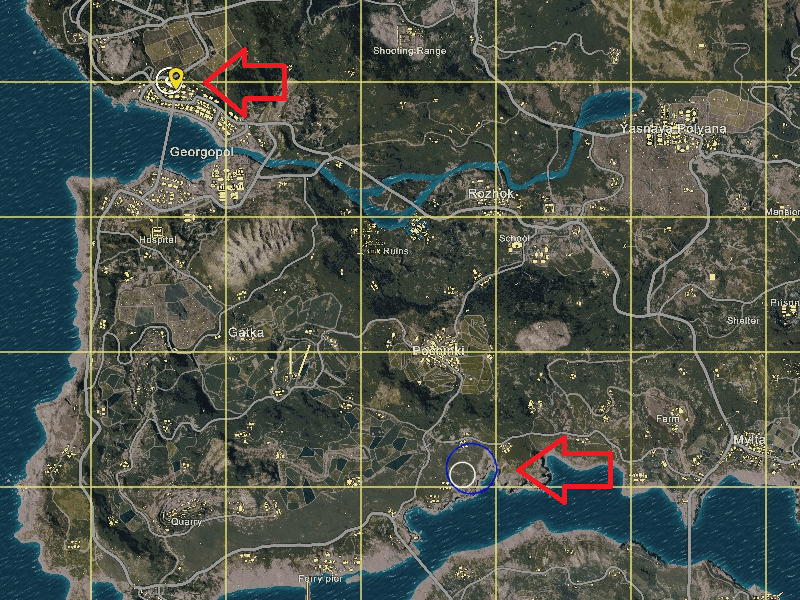 Why I couldn't get to the top of the leaderboards with this strat then? Because at 2200 rating I was facing other 2200 rated players who did the same damn thing. Zharki became a death-trap with players fighting over the loot every game. I died in Primorsk when the 4th circle was over Stalber. I killed a guy there the next game with no circle around, this was my first kill with shotgun. I'm bad with my 0.12 K:D, but he was much worse. Yet, we were both at 2200 rating because of medkids.

He is currently #2 in EU Solo. Check out those heals! He uses 30 healing items per game on average! Sure, he also have a few kills (1.5/game), so he isn't only doing medkit-collection, but I'm sure it's the main workhorse of his play.

So if you are not in the top 0.5% already, all you have to do is driving to a city far from the circle and pick up medicine and after a dozen games or so, you'll be in the top 500 and can tell bullshit stories to your internet friends about how awesome you are, like the top players do. This is the most important thing to take away from this: those at the top aren't better than you, they just know some trick that you don't. If you learn it, you can be just where they are.

I wonder if Bluehole changes blue mechanics if everyone ignores fighting and just collect healing items, but if they do, it will be no time before the "l33t" figures out the next way how to climb the rating without risking PvP.

I am fairly certain the strategy for getting the highest winrate (percentage of #1 placements) would have you doing this for at least 1/2 of the game. Blue zone does almost no damage during the first few intervals. The hard part would then become deciding where and how to engage the white circle.

Congratulations on finding a method that works for you, reaching your objective and getting close to to maximising your rating. I do not think there are many people that would be able to follow your tactics without some significant changes.

Your current tactics are unsuitable for the following types of player:
- Elite players hunting a Top-10 is rank. You grind rating too slowly. No-lifers will always accumulate points but better/more efficient players will always out-rank them.
- Win seekers. You cannot win if you cannot kill the final opponent and their is no satisfaction from getting a 1-in-1000 random victory that you did not influence.
- FPS-gamers playing for fun. They want to play an FPS game not a scavenger hunt.
- Socials with PUBG friends. Any socials looking for respect from their peers will get laughed at for the terrible K/D ratio.
- Socials without PUBG friends. Their friends do not care about any PUBG achievements.

How fun was it, roaming in empty zones collecting medicines?
I know, fun is an excuse for slackers. But, it is a game, after all. People are expected to play it for entertainment. You get yours from writing this blog afterwards and revelling in the glory of top 100, other people enjoy other things.
They probably should move to a game more like CS or CoD, where the killing is the main goal of the game, though.

I watched PUBG streams a bit and noticed, most effective players are more or less looting half of the match outside of the circle and then other half to the game is guessing where the next circle will be and get advatage. On the end, its mostly random dice roll who wins.

Circles as game mechanic are good twist, gives replayability. de_dust on CS gets boring after a 101-th time, random endgamepoint on big map makes makes game alot more unique. What i dont like is the mechanic on staying outside of circle. I understand that on early game, you should not get hard punish on staying outside of circle, distances are too big and long. But on lategame, damage of the circle is too big to do anything meaningful. When circle get smaller, damage is getting bigger. With enough healthpacks, you get alot more looting time on outside of ring then people inside, and if you get back inside ring, you dont have any disadvantages exept position. And if the circle shrinks, you are equal as anyone else who has to move. Give a stacking debuff while staying outside of ring. Who chooses to stay outside of ring on early game, gets punished hard on lategame while staying outside of ring and vice versa, who loots inside of the ring most of the time, can in lategame reposition using outside of ring without getting killed by it. Currently, late ring stages favor so heavily people, who got a luck with position. Literally its a dice roll who wins or not, ideal "random" parameter to skrew to help paying customers to get a advantage.

Any socials looking for respect from their peers will get laughed at for the terrible K/D ratio.

Do socials get to pick which reward/ranking element is to be considered more popular or important?

And more importantly, what happens when PUBG enters the ranks of other, esteemed e-sport competitions? Do certain playstyles get lauded over others knowing that Gevlon was able to reach a very laudable ranking with his own, questionable playstyle?

Just as an addition: the damage now increases as time goes by (later blue hurts more). The straightforward solution is to also include the distance from your current position to the closest blue edge in the calculation. Half the map away out on circle 3 /4 -> instadeath.

wow, what a cool multiplayer fps. the pvp rating is as terrible as eve killboard wanking... jeez, i'm so glad i haven't bought this game...

Aw cool, was my earlier comment the inspiration for attempting this?

I like the ranking system, as I feel that winning should be rewarded significantly more than killing. However, the Devs will need to make changes to the blue zone if they hope to make PUBG a competitive eSport. It's hard to justify a strategy that makes no attempt to win the game as the most effective strategy, even though it's certainly the most effective method in this current beta iteration. Then again, as the playerbase learns that ending position matters far more than kills, this strategy will lose some of its effectiveness. Hopefully, looting the Blue will be seen as a gamble in future patches, in order to promote engaging, diverse strategies.

Nevermind the haters, they're just mad that your ranking is way better than they could ever achieve! ;)