Please don't hack accounts, use a bot or speculate instead!

Nosy Gamer reported how Albion Online is in trouble because of gold sellers. In short: they use stolen credit card and paypal data to buy gold from the company and then sell the gold on third party sites. The company gets a chargeback of course and bans the buyers and sellers. There is also a DDOS attack on the server because of the bans - at least by the claims of the company, can be just ordinary lag and bad server code.

However it's not the reason I'm gloating here. The reason is that one of the screenshots of Nosy (no link provided) is more than interesting: 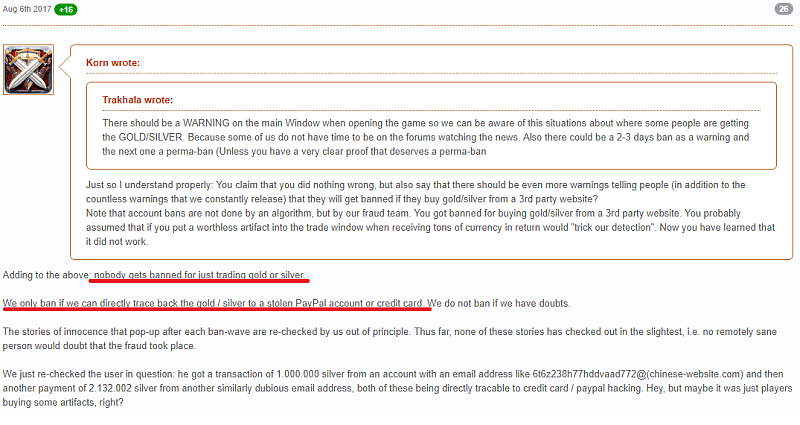 Yep, the lead dev spells it out: you only get banned if you do credit card fraud. If you just "trade", you are fine. Ergo, botters, sweatshop-goldfarmers and market manipulators are free to sell their wares, they won't care, mostly because they are doing it too.

As I've said, it's not just a gloating page how I was right again. It's about an important lesson why companies should take corruption seriously: because there is no such thing as safe back door. The employees set up easy ways to trade gold so they can use it with their buddies ... only to let a bunch of credit card thieves march through it! If the game wouldn't be intentionally supportive with trading gold, it wouldn't be so easy to make money at the expense of the company with a stolen credit card. Think about WoW instead: if I steal your credit card and buy a WoW account and a bunch of WoW tokens, I won't be able to cash it out easily, because gold transfer isn't trivial. Guess what, they don't have such bad problems. Lesson learned maybe (besides "if Gevlon says the game is rigged, you better avoid it")?
at 03:00

"Think about WoW instead: if I steal your credit card and buy a WoW account and a bunch of WoW tokens, I won't be able to cash it out easily, because gold transfer isn't trivial."

I don't get it, gold transfer is trivial in WoW, which is why gold sellers are everywhere there. Actually it's even easier on WoW, because Blizzard only bans the seller.

And what does the fact that they allow gold speculation have do to with credit card fraud in the first place? They are entirely different issues.

@Hanura: Stealing credit card data isn't that profitable on its own because of chargebacks. If I get your credit card and wire your money to my account, all I get is some jail time.

The point of doing it with RMT is:
1: RMTer steals credit card of Adam
2: RMTer buys legit gold with it, paying for it with Adam's money
3: RMTer sells the gold to Bob (getting money from Bob)
4: Adam gets his money back from the game company
5: Game company might catches Bob, but Bob can't get his money back from RMTer

In WoW, gold is mostly worthless (200K for $15 legit!!!), because the in-game value is gear that can't be traded. I haven't seen WoW goldsellers for long. Account trainers sometimes but I doubt if anyone still buys illicit gold in WoW

Unless you think that anyone who trades silver to another player should get banned? That is certainly an interesting standpoint.

"Stealing credit card data isn't that profitable on its own because of chargebacks. If I get your credit card and wire your money to my account, all I get is some jail time."

Credit card data is incredibly profitable to sell, and the more recently it has been stolen, the more you can sell it for. How many of the people who sell data do you think go to prison each year?

Account trainers sometimes but I doubt if anyone still buys illicit gold in WoW.
They are still active.
You can watch them at Ratchet Bank.
Level 1 Chars with names full of random characters.

@Hanura:
Don't forget that Albion's gold equal to WoW's token, and not WoW's gold. So trading gold in Albion is like if you could trade tokens directly in WoW.

@Cathfaern: You can't trade gold directly in Albion either, you must first convert it to silver, just like with tokens in WoW.

@Hanura: you could, they disabled it in a recent patch, along with placing gold to guild accounts.

You're going to make me audit the black market for WoW, aren't you?