Renters are people. Goon ratters are mostly not.

The last ratting analysis made me think about the amount of real players participating in PvE activities that lead to dead rats. The basis of the analysis is the fact that more people play in weekends than in weekdays. You can see how Saturdays and Sundays are larger than weekdays on EVE-Offline.

I looked on the highsec ratting data gathered since June and divided the rat kills with the weekly average and averaged the same weekdays, getting this distribution: 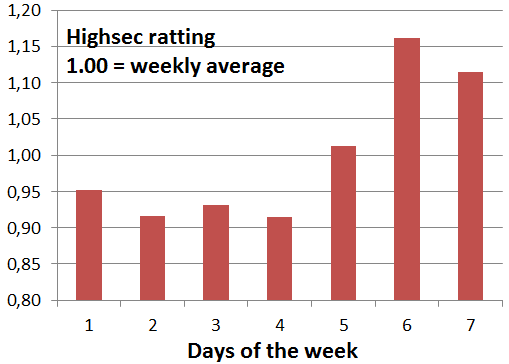 As you can see, Saturdays and Sundays shine out, Tuesday, Wednesday and Thursday are low and the bordering days are intermediate. To describe a week, I calculated average(Sat,Sun)/ average(PrevTue,PrevWed,PrevThu,PostTue,PostWed,PostThu). This value was calculated for every week for 7 months. Then I calculated the median of the same days. It's better than average, because a server outage or battle can create a point that stands out, affecting average, but not the median. Below you can see these values for all nullsec regions, highsec and lowsec: 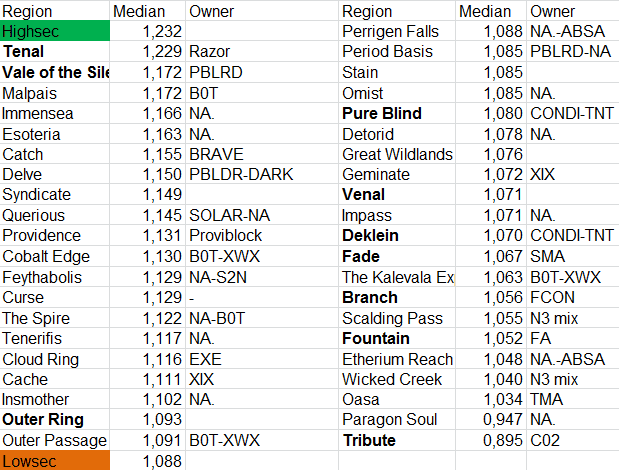 On the top stands highsec, showing that highsec has the largest weekend/weekday ratio, it follows the player activity the most. Then - to my surprise - stands the land of RAZOR. In the first half you can see mostly renters, NPC regions, Provi and HERO. In these lands people rat.

Lowsec is somewhere in the middle. It's not a surprise, most residents aren't there to rat, which is obvious from the fact that total lowsec ratting is about 1/15 of total highsec ratting, despite roughly equal number of solar systems.

Now let's see the bottom regions: they are littered with CFC proper members. Not PBLRD members, they are on top. I have no idea what C02 "people" do, but Team Security probably should have. But let's not be unfair, various N3 proper regions are visible in the bottom.

The result is the direct opposite of what everyone expected: renters are people and proper alliance members - especially CFC members - are botters or nolifers. But if you think about it, it's pretty logical. A botter/nolifer rats a lot, so it's better to invite him and then take 15% ratting tax from his lot of rats. He also won't mess up the killboard as a properly programmed bot insta-warps when neutrals enter the system. On the other hand a bunch of casual players who want to try themselves out in nullsec are best charged flat. If they fail to kill many rats, the rent is the same. If they fail to defend themselves from roamers or awoxers, your killboard is unaffected.

Knowing this, it's understandable why the Evil Cabal rejected renting for so long. It gives a chance to new and casual players to try themselves in null. While most will fail, some will stick and can become a threat. It's best keep them in highsec and let only financially dependent F1-monkeys and botters/nolifers to null. This also explains why Goons rejected my generous peace offer. Since the "adorable newbie" Goon player ratting or hauling with his main is irrelevant to the CFC income (as it's based on botters and nolifers) his death is also irrelevant to the Cabal. I wonder if his departure will be irrelevant too. If you want to figure out, MoA is recruiting and collects donations!


PS: I sometimes have doubts if Goons are the most evil in EVE. I never liked "falconmate" Vince Draken, but his latest alliance update is a new low: "Don’t be that guy I get made an example of for being a fucking jew!" It's hard to not go Goodwin on that.

Your analysis kind of fails to take into consideration that people who play in a null alliance have a far larger than average population of players who CAN play 7 days a week.
Or have off days that are random.

I'm not saying botters do not exist in null, but by assuming all players follow the trend of the casual mission runner in high sec that are mostly players that only have time in the weekend you add a severe and unadressed bias in your analysis.

What is the standard deviation of this graph?

"Your analysis kind of fails to take into consideration that people who play in a null alliance have a far larger than average population of players who CAN play 7 days a week."

That would be correct - in addition to that though, weekends are usually when the most combat ops happen due to everyone having more time - from people that can log on 23/7 to people that are most active on weekends.

Since you don't rat on combat ops - and if you put ratting before combat ops without a damn good reason you should probably ask yourself why are you in a nullsec pvp alliance anyway - they will lower the weekend average.

And, yup, not exactly a stunning discovery - in many ways, N3 are even worse than the CFC. Sometimes they make us look like the good guys.

No, I ment the standard deviation from the median on which you based your analysis. Because if that is 0.33 (which I hope it isnt) then all regions statistically have about the same ratting behaviour.

i think your readership has pointed you many times towards the fact that goons aren't the only ones in this game with a somewhat dislikable attitude.

its much easier to rat in regions with gurista/serpentis - ishtars have perfect tank against those and you can manage 3-4 ishtars doing anoms without any additional software...

@daniel: true. However Goons are the only ones who enforce their disgusting actions on others.

Honestly: I have no business reading an NC. alliance update. Sure, Vince is a shitty person IRL for what he wrote, but if I wouldn't peek into their leaked SotA, I wouldn't know.

Goons blowing you up and calling you a pubbie shitlord is a bit different.

The old Goon players are the same as NCDOT players and PL players.

There is no difference between them at all, they have the same attitudes and shitty superior elitist attitude.

Yes, but the variation of the median is exactly what the standard deviation is for.

Given a value of 0.15 the ONLY values that are statistically significantly different are Highsec and Tenal. Literally everything else lies within the boundaries of the deviation.

By the rules of statistics these values therefore cannot be used to make any realistic conclusions about ratting behavior.

You'd need to narrow the devation to at least 0.05 or so by collecting more datapoints.

It does show a bit of a trend, but not enough to make the point you're trying to get across.

So you have discovered that goons do other things when the online pop is higher (perhaps shooting at things?) and do ratting only when there is nothing else to do, as opposed to casuals (who are the bane of your existence) who only play eve to rat.

Gevlon, come join us in a crusade against the wicked anti-semitism of NCdot's evil Fuhrer, Vince "Der Sturmer" Draken.

Surely we can put aside our differences as fellow disciples of Ayn Rand for long enough to crush this vile hatemonger? Then we can return to our duel to the death.

Also, the anonymous dude is right: at the weekends, Goons (and other nullsec occupants) go on fleets and shoot each other. Midweek is the time to make money. Weekends are the time to make things blow up.

Highsec has no such distractions.

@Endie: Vince at least doesn't enforce his crap on other people. Yes, he is repulsive, but can be safely ignored. Goons on the other hand attack everyone, including those who could never hurt them, so can't be ignored. So must be destroyed.

"Goons on the other hand attack everyone, including those who could never hurt them, so can't be ignored."

But you killing miners was totally different?