The players consume content faster than the designers make it

The title is a well-known problem in MMO design: to keep the players busy, the developers must feed them content. But players eat faster than content is produced. Part of the problem is that players feel forced to rush and play extensively to "remain ahead of the curve" and "catch up with their friends". This is best seen on topguilds that play 10+ hours a day when content is published, finish it in a few days or weeks, then stop playing until the next content patch. While normal players are less extreme (by definition), the queues and the server crashes in WoW shows that they also play much more after content is released than later. They likely focus their leisure time on the game instead of other hobbies, maybe cut down some family time, some sleep, maybe get some days off work.

I believe we look at the problem upside down. It's not the developers who produce content too slow. Imagine that they were capable of producing an expansion every month. Then the topguilds would play 10+ hours a day constantly and the normal players would stop having other hobbies and spending time with their families. Or they would fall behind and couldn't catch up. This is impossible, people would simply burn out on the game.

The solution is the opposite: slow the players down. Imagine a gated WoW release: My point is that the same content sould be published over the same time, but in an evenly distributed wayk. So players would play at a constant speed, instead of going nolifer at the start and being bored at the end. They would have time to look around the world and find hidden places: 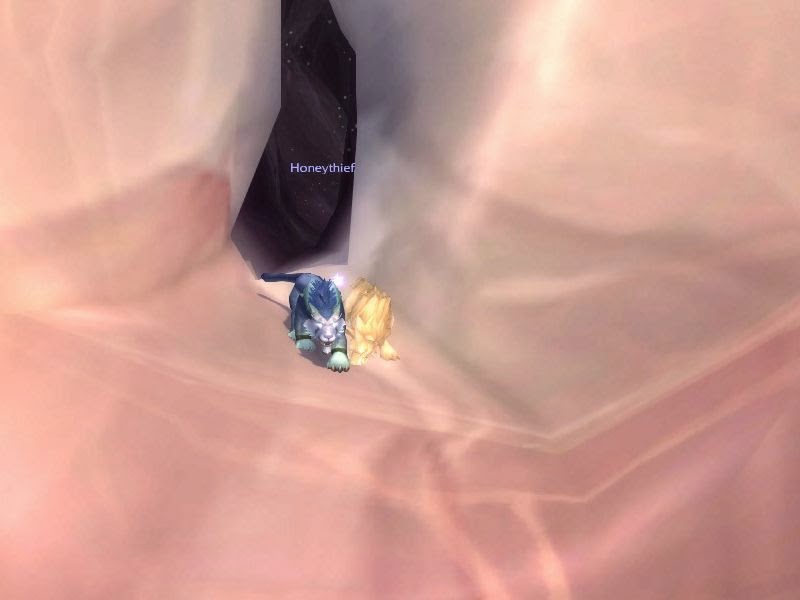 As a bonus: if there are bugs, crashes, queues, players can do something else, instead of spamming login or jumping up and down in the garrison space hoping to get in because "they get behind". They can be sure that they can catch up and complete the weekly content before the end of the week.

What you are talking about really is an "incremental release". It's something the software industry has been doing outside of gaming circles for a long time.

Benefits are more than slowing players down ... they also allow development teams to quickly iterate on new features, change directions if things seem broken and experiment.

I have similar thoughts. Some possible additions.

- scale player power down in low level zones and instances. for pvp makes lvl 100s not instant gank any lowbie they come across. for pve allows new players play with their lvl 100 friends as the new guy levels up. all zones are then content for max level players not just a select few.

- all trade materials as equally difficult to farm, even those in lowbie zones, and so don't need to be made redundant at each xpack.

- because all the instances and raids are now challenging for max level players they are content for players who may not have done them the first time.

- might need to allow for players who wish to solo those old raids as it is currently a popular form of content. but then why would people run old content scaled down and share loot with others?

@ anon 04.20 Terrible idea and the reason why I dont play gw2 and never will. Scaling me down in the older zones makes all my character progression irrelevent. Sexy new bow? who cares. Just got 10 more levels? what was the point? wont let you grind out that booty bay/shaosao rep any faster. Why bother gemming and enchanting new stuff? why even go get new stuff? Might as well just skip leveling all together and hang out on the mail box rping in trade.

Except I won't do that, i'll be unsubbed, playing something else where my efforts meant something (for me/my char) and I could achieve things. even if its all just pixels.

Blizzard tried to do this with the release of ICC and the rage was astounding. It used to work for games like EQ, which had a pretty steep xp requirement for levelling, but for today's audience this won't fly anymore.

Personally I prefer if I can take a vacation after a release and drop in a shiny new world for a few days.

Having the contents released over time would a) kill my vacations and b) force me to constantly play, effectively killing my social life...

I'd guess I'd rather stopp to play

gaining levels would open up more content. advancing your gear would allow you to do current content as it does now.

"wont let you grind out that booty bay/shaosao rep any faster."

because grinding is great content. how about make those reputations linked to older content that you have fun while doing with other people?

grinding rep was added to slow down content consumption. if all old content is reopened as fun gameplay part of the reason for rep rinds are removed.

There is a place for big and small steps. I can think of several reasons for making big patches. That is why you need to balance the two.

Adding gateways leads to accusations that you are delaying people just to keep them subbed for longer.
Small, regular releases tend to concentrate people in the newest zone.
Small iterations are be definition iterations. It is a lot harder to completely change systems or bring in something new.

Grinding rep is another thing that gives progress/achievment with the game. Espec when at exalted you get mount or pet or vanity tabard. With achievments also for having 50 exalted reps, for owning 100 mounts, for having all burning crusade reps exalted...

Now people can sneer at achievment points and having 124 mounts (you only need 1 after all), but for me this is as good a way as any of keeping score. Espec as Blizzard insists on resetting my gear progression every 6 months. That to my mind is the big thing that needs changing, not least cos it trivialises old content and ruins the value of crafting professions.

Rep grinds in eve used to be even more awesum, given how they made you pay less broker fees and could refine ore with less waste etc etc. Grinding standings for corps/factions was a definite improvemnet to your character that couldn't be taken from you; not at least until CCP removed the need for it from the game.

I can remember back in my Everquest days, there were the first expansions hard enough to keep the players at least busy for half a year to beat it the first time. After that it took 1 or 2 months to get used to the scripts, and only then they put it to "farmstatus" to gear up for the next expansion.
Especially one I could remember, were it took the top guild 7 months to beat it first time.
Also there were Events that took a raid up to 3 raiding days to complete.

Another point is the progression path. In the beginning you had to complete a path of older progressions, to gear up, to complete the actual content.

I think teaching players to be more disciplined in their gaming is a good thing.

However, I don't think it is possible to achieve this with just gating everything, though.

In fact, the article's title is misleading as this has nothign to do with speed of consumption of content, but rather has to do with many people wanting to consume the same content at once.

"Launch day insurance - no dropped users or your money back :D"

any gating that is visibly "just to slow down content creation" is seen as such.

Which is why I played WoW for 2 months around cataclysm. Wait for tomorrow for next daily quest? how about uninstall now?

This is general problem with game design. Some people like to do same thing, each day, everyday. Other people go : no new things, goodbye.

Which is why accomodating emerging gameplay is important.

Procedurally generated content is a bit stiff right now, especially that it needs to compete with artificial "progress meters" and vertical design in general.

Go horizontal, and then you have many places with things to do, instead of world, where 90% of activity focuses on 5% of world area.

There were gates in BWL, Naxx, and Sunwell.

There were also bugged out unkillable bosses for months at a time such as Vashj and Kael. There were also gear checks back when gear meant something such as Gruul, Vael, Patchwerk, etc. Players hated gates and complained viciously.

Your idea was tried and found lacking.

"Players" couldn't hate those gates since 99% never seen those bosses.

Well, WOW is an endgame game. FOTM class play is coined within wow. thanks to ridiculous leveling speed. it's a game with freaking XP heirlooms.

If you want slow leveling. try any eastern (korean) mmo. really do it. Aion isn't that bad anymore XP wise (it was!) give ArchAge a shot. you will love it.

Consuming content to fast is a problem since ever. A book is written over a year and consumed within a weekend maybe a week.

Also the top guilds have "enjoyed" the content on beta. or will enjoy it on alts. On launch they have just one goal: get the achievements ASAP so they prove that they are the 1% + timestamps.

The leveling content of WoD is in about 15h consumed. Some single players have a comparable time invest. other RPGs try to build in replayability or other 100% features that will stretch gameplay to 100+ hours (Dragonage, elderscrolls or arpg like diablo). Blizzard does everything right. You play 15 hours if you like what you see there will be more if you finish (dungeon content).
And guess what. thanks to steam AVs you can compare each others timestamp dicks out of game in singleplayer games now *sigh*

the content stretching isn't western, mainly thanks to blizzard again (SOE back in the day as KING had grind. EQ, SWG, anyone?!). What you seek is more eastern ... they love hardwork and grind. Please feel free to look into it. Right now, ArchAge seems to be a good example .. Aion over the last patches had some serious XP gains patched into it so it isn't as time-consuming as it used to be.

I miss sandboxed games like early SWG. No levelling no AVs. Will sandboxes ever return? maybe post-WOW someday. *fingerscrossed*

similar post complaining the limited duration of the wow 10 year anniversary raid: it forces people to hurry to level cap or else they will miss it.

It works fine for me, I play their game 3 or 4 months per year only. Who wants to play the same game 12 months a year anyways?