In the middle of August, an unprecedented event happened: a coalition formed, not to cooperate in taking systems and build a renter empire, but for the most noble purpose: to cleanse the Evil Goons and their minions from New Eden.

I immediately checked the July killboard data of the forming alliances and found that they did 248B damage to CFC and suffered 115B from them. Now it's time to check their first month which isn't even a full month. I received the CFC+Battlement killboard data. As always, the kills are de-whored, so if you did 1% damage to a 100B titan, you get 1B damage booked and not 100B. Above all, like you could see in the August CFC loss report, they became the #1 killer of the minions of Evil: 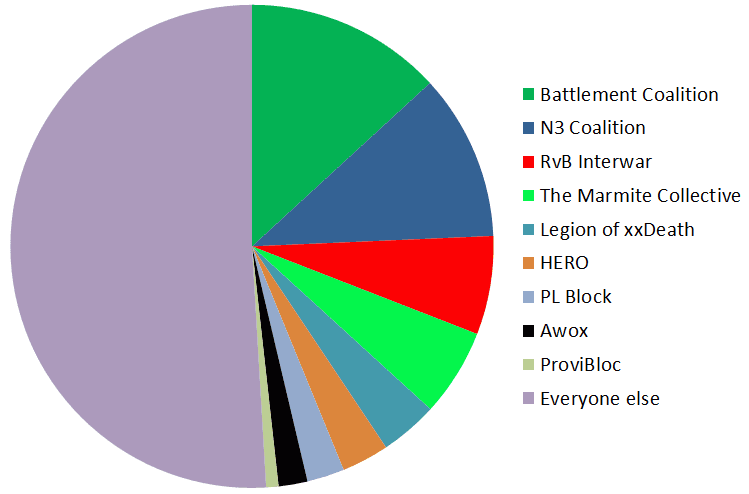 As I only cared about the damage CFC and Battlement caused to each other, all third parties are ignored. Let's check the data from the CFC side first: 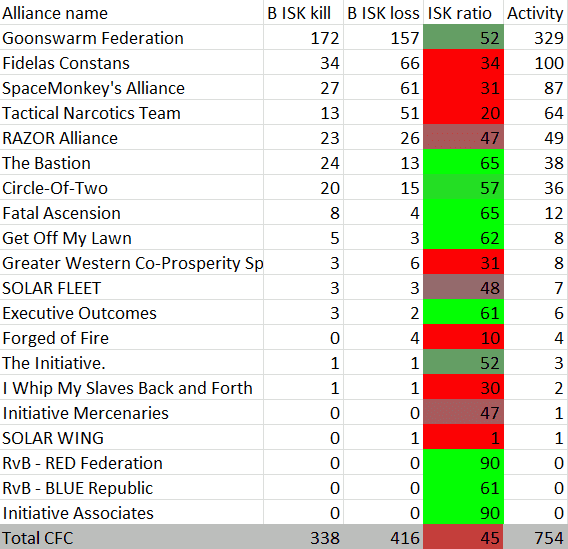 Whoa! The CFC losses from Battlement almost doubled since July. That's a good start. The only surprising result is that GSF did pretty good defending their space. The table is sorted by activity and they are followed by the usual bads: FCON, SMA and TNT. On the other hand the smaller alliances did very good, resulting in a not so bad (by CFC standards) 45% ISK ratio.

Now let's look at the same from the side of Battlement. I cut the table into half, let's see the 7 alliances with the highest activity (not ISK ratio):

It's pretty good with 57% ISK ratio and very high activity numbers. While there is clearly room for improvement, it's a great start. CFC is already in trouble as Battlement became their biggest killer among coalitions and it will just get better. VFK by Spring!

This on the other hand is a shame. The main problem isn't the ISK ratio which can only be compared to renters and NPC corps, but the horribly low activity. Unlike Intrepid Crossing, which is at least trying, these alliances are either way too small to be viable or they are just a bunch of terribads who got into the coalition only to be left alone by MoA/Tri/Mortuus while farming Mordu's Legion loyalty points. They serve as nothing but embarrassment for their blues and goldmine for the Goon propaganda site. Luckily one of them already collapsed and one is kicked.

One has to understand a crucial difference between Sov-holders and non-Sov holders: So I'd strongly suggest to kick the rest of underperformers from the coalition too, maybe after absorbing the (somewhat) useful corps into other alliances. Their bad performance isn't just temporary, they were bad in July too.

Finally, here is the fleet size analysis, showing the ISK ratio of Battlement Coalition against CFC in different sizes of the bigger fleet: 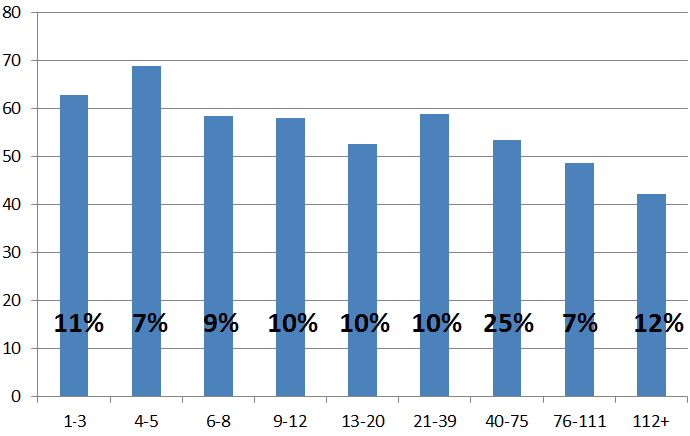 The result is the same as I've found in the overall CFC killboard: in small gang CFC is badly beaten, in large fleet they win. This should be kept in mind when fleets are formed. Unfortunately much activity (% numbers on chart) was done in the large fleet segment.


PS: Read this very good proof that there is no player speculation (buying up for later sale) in PLEX.
at 03:00

Spoiler: if a pilot is bad and has low attendance, he gets purged.

We may not care about killboard efficiency, but some people are just too bad.

You do realize that nobody ever won a war through ISK ratio, right? You win a sov war by accomplishing strategic objectives. And, believe me, if your enemy is having fun fighting you, has no shortage of money and wants more - you're nowhere close to breaking their morale.

The fallacy "We have a good killboard, they have a bad one we'll win this war they're bad and already dead" has doomed many, many alliances before. Too bad they're too proud to learn from the past.

In fact, might just be contributing to its rise.

Who was talking about a Sov war here? I explicitly advised against a Sov war or even using large fleets. The moment Battlement focuses on Sov or even Moon control, they are done and gone.

This is a guerilla war aimed at weakening CFC to the point when N3 can wage a successful Sov war. The goal is to destroy their financial backbone (ratting, see tomorrow's post) and the will of the players to play on their CFC pilots.

Pilots don't get kicked. Corps get kicked. However if the corp is picking up enough paps no one will question the activities of individual pilots. So all you need is a few active pvpers and the inactive can be carried along (pareto 80/20 applies here).

There may be some corps that do audit's of pilots but then what on earth are they doing in the CFC if they care about their pvp image that much.

You are perfectly right. But the simple fact that you can't seem to grasp is that we are breaking your morale. Every day. Your ratters can't even rat. Its pretty embarrassing to be honest.

Which is still around?

That's the main goal of the Funstapo, in fact. They gank random supercaps that have no strategic value and ruin player events to provide reasons for their pilots to log in. It means they're available when things that matter do actually happen.

In fact, CFC is going to have a great reason to log in starting next weekend, and it has nothing to do with Battlemints.

"Who was talking about a Sov war here? I explicitly advised against a Sov war or even using large fleets. The moment Battlement focuses on Sov or even Moon control, they are done and gone."

Well, I hate to break it but they did during the brief campaign in Cloud Ring. So they certainly didn't heed your advice.

They were seen attempting to take moons, their little powerpoint mentioned going after sov targets and they actually reinforced a few things. Even put up their own mining towers on unclaimed moons.

So yes: they're after Sov, not "just ratters" and certainly not just "in for a few kills".

If you're in for the kills and fights, you form roaming gangs. You don't form bombers and run from threats, dock up and not fight back.

Actually moa took moons from the CFC and held them for 2 months. Long enough to make hella profit and to keep that isk from the CFC. Wait till the weekend. You nerds are really gonna be crying. Best part is those moons were easy pickings. And the next time you go on deployment, we will do it again. It will cost you way more on deployments hence forth than you have ever had to pay before. Better buckle that peace time reimbursement.

"Wait till the weekend. You nerds are really gonna be crying. Best part is those moons were easy pickings. And the next time you go on deployment, we will do it again. It will cost you way more on deployments hence forth than you have ever had to pay before. Better buckle that peace time reimbursement."

So cute. Ev0ke and VeGA have been doing this to us for way over a year and the only results that had was them getting murdered time and time again.