This post is redone with better data processing, read that, ignore this!

I've already shown that most losses of the minions of evil in New Eden happen in small-fleet engagements instead of large battles. Today I go further and check not just their losses, but their kills too against the three largest non-coalition, nullsec damage dealers: Black Legion, Mordus Angels and Pasta Syndicate. I used kill and loss data from May and June.

The kills were not just de-whored but third-party contributions were removed too. So the first chart only contain Mordus de-whored kills on CFC and CFC de-whored kills on Mordus. I also filtered out pod kills, since those usually have 1-2 killers, regardless of how many killed the ship and made the pod kill possible. The groups are defined to provide approximately 1/8 of the total activity (kills+losses). The red numbers give kills+losses in billion ISK: 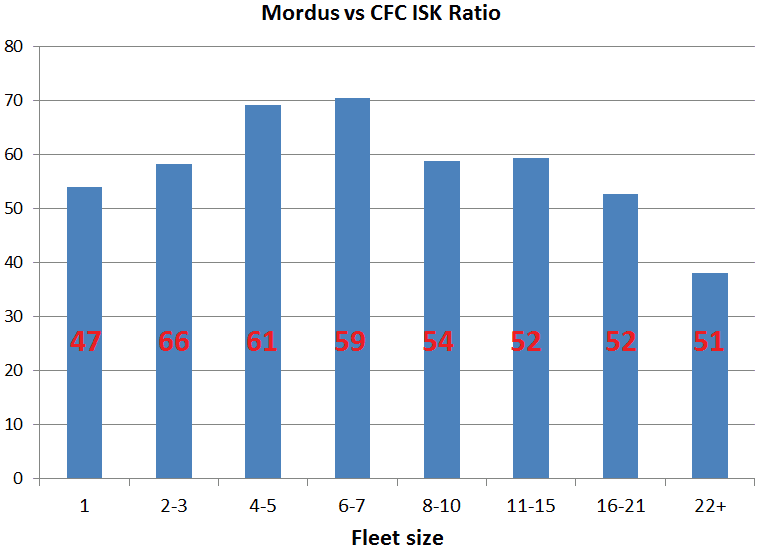 As you can see, Mordus Angels have pretty good ISK ratio in the small-fleet sizes, but this ratio decreases with fleet size and goes down to the pretty bad 40% on the largest fleet sizes. This isn't so surprising if we consider that the strength of CFC is blobbing. When someone stands up to the swarm of the minions of evil, he loses. Hit and run, guerilla warfare works against them. It's pretty clear that MoA should avoid forming or joining to large fleets.

Let's move to Pasta! While the previous fleet groups don't split the activity into 1/8 groups, it doesn't matter as all fleet ranges provide around 80% ISK ratio. Except for the largest. So Pasta is very good in this small-gang piracy thing and not really good in large fleets: 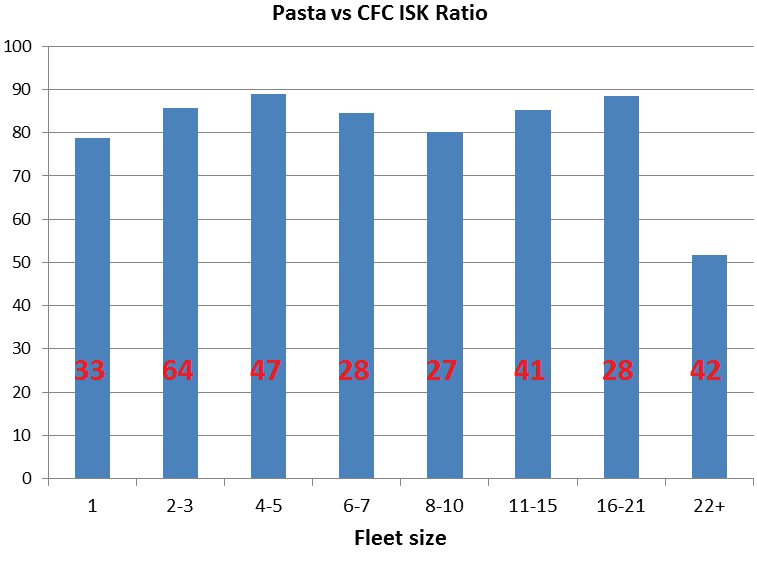 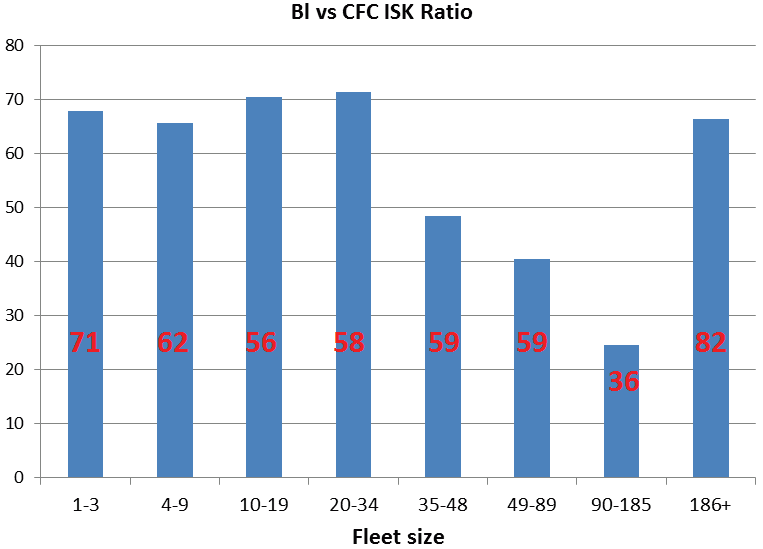 Above all, please notice the different scale. Mordus and Pasta had about 85% of its activity below the 20-man kills. BL has 2/3 of its activity above this size. BL simply operates on a different scale. However, they also have their best ISK ratio in the smaller (relatively) fleets and have bad ratios in larger ones, except the very large ones. But let's remove the supercapital gank of Daras from the data: 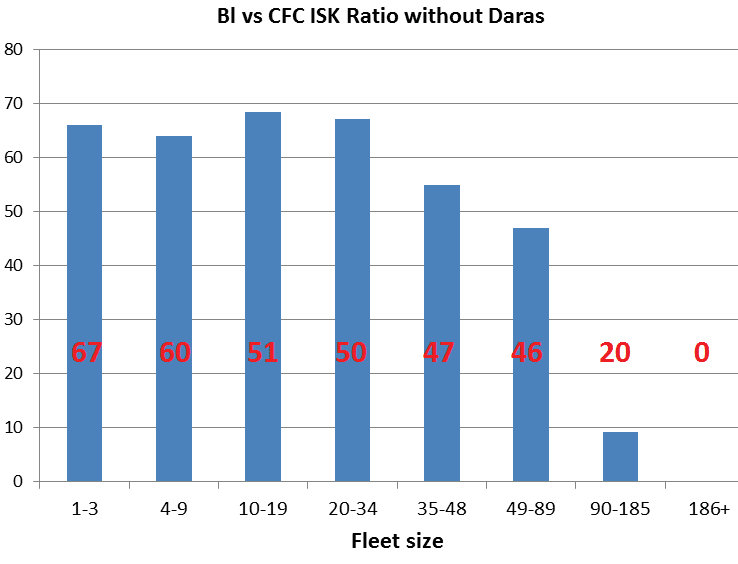 Ouch! So the "big fleets are losing against CFC" is true for BL too, but they sometimes pull some crazy trap and gank some supers, evening out their large-fleet killboard. Smaller "pirate" groups might tag along and can whore on the kills, but they pay high price for that: they lose most of these fleet battles. So if I was in MoA or Pasta, I'd avoid fleets over 20 as they tend to attract a CFC blob and die. Yes, whoring on some supers looks good on the killboard, but it hurts the minions of evil much more to hunt down their ratters and stomp on their small gangs. And that activity is much better for the SRP wallet too.


No day can pass without morons finding new ways to die. How can you lose a JF to a tower?
Bling battleships die to suicide gankers all the time. But this wasn't ganked. It was in the NPC corp, so no wardec either. So this idiot either had kill rights or willingly engaged.
This one shows that autopiloting in highsec with a bling and a jackpod is dumb.

Sometimes towers aggress who they should not. It happens.

And that is why provi is fun

Congrats. you found out that guerilla warfare works against big groups?

Imagine why they have good isk ratio? Cause they dont fight. if you form a fleet in same size. or even below, they run.

You cant hardly do about it. nothing new