I hate achievements, but For the Horde (and its alliance counterpart) are definitely my most hated ones. The task is simple, form a raid and kill the leaders of the other faction. The fight itself is ridiculously easy since you can get out of combat to drink or to resurrect. With 40 people it's quite easy to overcome the few defenders of the city.

These raids are stupid both human and goblin-wise. The bosses don't have loot, nor they did anything to deserve to be killed. Yet the people swarm to perform these attacks, to get the achievement and to get the golden calf of the WoW, a mount! While the "Explore Ashenvale" or jump down from 65 yards are just plain stupid, these achievements are simply evil, wanting people to slain dozens of guards and players, bringing havoc to a peaceful city without any reason or reward. Don't be surprised to see "evil" here. While the goblin philosophy is self-centered, it's not supporting mindless and pointless destruction.

However I wouldn't be the Greedy Goblin if I'd just whine and /cry about it. When an alliance raid attacked Orgrimmar, I spammed trade to make more and more people to come to Orgrimmar, we formed a raid, and killed them all. Than I logged to my mage and portal around the cities to find another alliance raid, this time in Silvermoon City. I convinced the raid do portal to Silvermoon and kill that ally raid too. Done.

After these someone came up with the idea to "get revenge" and raid an ally city. I tried to explain that "revenge" mean counterattack on an attacker and the folks in the ally city are not the same guys who attacked Orgrimmar and Silvermoon. While they are all alliance members, they are different people and not responsible for the actions of the others, just their own. Of course they did not listen and went to raid Exodar (they thought it was the easiest). So I created a lvl1 ally char, ran to the city and spammed trade about the incoming attack. The allies formed a defense and killed the attackers. 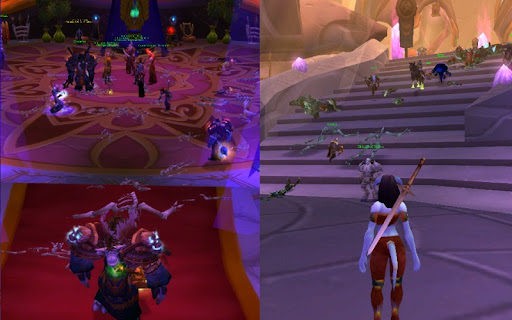 This was a little bit unexpected but very cute. You have a heart after all!

I really hate those raids also. I never understood killing the opposing faction for the sake of doing it. My priest is on a normal environment did not know it at the time I went because my buddy was there, but I still see a lot of the stuff I hated on the pvp server. Ally toons killing guards in lowbie towns so lowbies cannot complete quests. However, one time it was turned against them when a troop of level 70 Horde came by to defend Crossroads. I was only level 30 at the time and my healing spells did not get them far, but I did buff them too although outnumbered they won. Naturally, Ally killed me for helping (this has happened several times on this "normal realm") them since I had flagged myself for pvp by assisting but I did not care. :-) I know Horde does it too so you have the senseless in game raiding on both sides.

As a 70 holy priest who is steadily getting epic gear I've fond myself in a much different position and am more effective defending these lowbie towns against those who are purposely making it hard for lowbies to complete quests, fly out, repair, or buy food and water and yes I do pop by a few times a week when I hear there is an invasion. I do my part to assist.

I forgot to add that I learned something new. I thought you got the war bear from the battlegrounds. :-)

Ah, yes, because raiding the cities would have absolutely nothing whatsoever to do with roleplaying. You know, those people who think that attacking the opposing faction's cities would be staying in character, and adding to a personal version of the lore? Yeah, those people are complete wastes of time and totally evil.

Sometimes I really wonder if you understand that aspect of the game. Yes, there are people who believe that they can have fun while doing things that are not the most brutally efficient use of their time, because it happens to be a more accurate roleplaying experience.

I would also argue that by causing a defense to be mounted against the incoming attacks, you were not in fact 'doing good', but rather just adding to the roleplaying atmosphere. Arguably, you could be said to have been doing bad, as you are actively preventing other players from finishing the achievement, and getting the reward.

But let's face it: there is no good or bad in WoW, there are only actions and reactions. Why should their action be pointless and mindless, while your reaction is not? The bosses carry no loot and did nothing active to deserve being killed, but at least the raiding party gets the mount after killing all 5. Your defense was even more pointless, as the players have no loot, and killing enough of them gives no mount, indeed gives nothing at all. You wasted your time defending a city that would have looked exactly the same 15 minutes after a complete wipe anyway.

Not only that, but when the Horde attempted a retaliatory attack (a perfectly legitimate and accurate roleplaying move) you took the extra time to create a new Alliance character, run all the way to the city, and organize a defense. Honestly, this was the best goblinish use of your time? Or do you in fact enjoy 'making socials and M&S wrong' more than 'being a goblin'?

The players here are voluntarily choosing to do content the devs have provided. I'd say, "Working as intended." The only way this activity becomes pointless is if heavy resistance is encountered, such as that which you organized, and even then some people would still consider it as 'just part of the rp experience'.

I used to think that those freakin Allies would come over and splat my quest givers did so for the lolz and, oh my, I was going to get them for it. Hello, PvP server. Then I realized that I didn't know who they were and even if I did, it's doubtful that I'd be able to hunt them down. Then I realized a tiny social mechanic in the game. By griefing, other players become the best kind of bad guy. The kind that makes you want to go smack a person down. Or a city down. Or a side down. The kind of bad guy that can take you apart if you run into the right one or make a mistake, the challenging kind. The kind of opponent that I and my friends enjoy on the PvP server. And if they get warned so that my retalitory raid gets wiped, well, that's part of the game too.

Grudges are a good thing. I'm Horde (can't spell hardcore without the Ach Oh Are Dee Eee) but I run Allies whenever I feel like it. My co-workers are a bunch of ally-loving nutjobs who love to talk about someone who griefed them, ganked them, or who they camped, ganked, owned, or just plain made their lives miserable because someone got pwned in WG again. Grudges are good. It allows for a more visceral enjoyment of the game. A kind of bestial I-beat-you-down-and-howl-in-triumph satisfaction. Good... Evil.... Action.. Reaction... Whatever. I find that it's always best to break a game down to Us v Them. And if WE can come into YOUR town and kill YOUR king, then lolz to you. I hope it pisses you off. Come and fight.

I have to point that killing enemy leader is a CHALLENGE, like killing a boss in hard mode. Even in 40-people raid, you are badly outnumbered when you enter enemy capital. Of course, you have the advantage of organization and some element of surprise, but these won't guarantee you the success.
As for being "stupid" for killing faction leader not droping any loot, is not killing a PvE boss that doesn't drop loot that you need stupid too? E.g., Yogg-Saron has not any tank loot in his list besides T8 token. So, if the tank comes to YS after getting his shoulders, s/he is acting stupid?
By the way, there IS some gain from capital raiding: you still get honor points for killing enemy faction players.