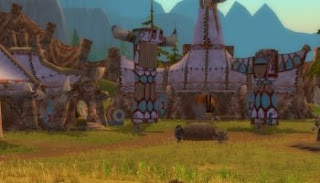 It's easy to make gold in the AH when you know all the trends, you read all available materials and you have enough seed money to run 5 operations at the same time and if they would all go down, you would still be one of the richest man on the server. However everyone had to start somewhere. No, I'm not talking about Gevlon. While he was started on a new server, without a copper seed money, I knew everything about the game's economy, upcoming patches, market trends, everything. I'm talking about the very-very start.
Being bored with Diablo II, my girlfriend and me were looking for a new game. We played Diablo II "locally" as a lan game without any MMO. We played on /players 8, the two of us, with no farming. We cleaned one zone, moved to the next, never killing the same monster twice. Used the loot they dropped or the vendors sold. We killed second level Baal without dieing once. I mean not on Baal, I mean during all the way from lvl 1, up to him on /players 8. It was lot of gameplay behind us, and as we know Diablo II had crappy graphics, we wanted something new.

So we started. We used the well working Diablo II scheme, she dealed damage, I provided utility, hunter/priest combo. Despite it was 2007 april, when there was no rested XP and increased quest XP, we did pretty well. We done quests fast, since with healer there was little to no downtime for us. As soon as we ran couple of times from higher level elites (once upon a time there were elites outside the world, meant for group quests, for example Stromgrade), we found out we need tanking capacity. She respecced bm/surv, improved aspect of the monkey, parry and such provided her huge avoidance, so we were able to complete 5-man group quests above our level. We reached lvl 25 without a single death when, after a succesful group action with some random guy, he invited us to a guild. She started to make friends with the people. I mostly ignored them, considering the guild-thingie a useless chat.

Around lvl 40 we were invited to ZF. While I said it's a bad idea, the other members are not skilled enough to prevent dieing (still have not died once), she wanted to go with her friends. Quick wipe of course. I was upset by our effort wasted. Since it was obvious that even a bot can reach lvl 70 with corpseruns, I saw no more challenge in the game, so I deleted the character, but before that I sent my 2100G to a random guildmember I chated sometimes.

But before you fall to your keyboard sleeping, let's get to the point. I had 2100G on lvl 40 with my very first char. And I found it obvious and normal. After all my brother always had something like that (he was lvl 70 of course but back than I did not see any difference). Obviously we never farmed. We killed monsters for our quests, she skinned them when they were skinnable, I herbed and disenchanted stuff, using it to enchant our gear. We sold stuff in the AH, including herbs and low-level leather armor she made. We never had problems with buying anything we wanted, when we were at lvl 19, 29 or 39 we were often mistaken as twinks.

It was her who started to make good money. She bought leather and sold leather items. The profit was obvious to me: she produced leather armor to people who could not make them to themselves, not being leatherworkers. Not having money problems, I did not cared about the economy first. I found obvious that I buy stuff cheap and sell high. The first real business came at lvl 18 I guess when I bumped into a large brilliant shard. It was listed for 30G when usually it cost 45. I borrowed 10G from my girlfriend and with my 20 I could buy it. That was the first time when I was worried about an investment. After all on lvl 18 a good piece of green armor is below 1G. The shard sold in a day. From then on we both were seeking opportunities in the AH.

Of course with all the game knowledge one can make much more. Ghostboci, my druid main reached 5000G at lvl 52, with much less play time than I had on my first priest. Now I run around with 50000, after gearing up an alt, releveling professions 3 times, epic fly skill and all included. Of course to be outstandingly rich, you have to know every bit of business-related game knowledge. However to be just fine, to have financial freedom, you need nothing but common sense. Buy low, sell high, don't waste your money on useless stuff.
at 07:00

I just read at Wowinsider about how much money you need in Northrend. And I became a bit worried. I definitly need to start my homework when it comes to handling my game economy. At the same time I don't want it to interfere too much with my levelling - I don't want it to be a time sink. I definitly don't want to spend a lot of time farming stuff when I want to get quick xp...
So what's your advice to me? What is the most time-efficient way of getting gold you can think of? What is the first measure I should take to get my finances in better balance while I still can keep working on my mission to get to 80 at a decent pace? I would be very grateful for some advice from the all-knowing Gevlon!
I don't aim for 50 000 g. I don't need the most fancy mount available. But I definitly don't want to have some 500-1 000 g in cash, which will be the case unless I do something about it.

The higher your level is, the more money you make with the same effort. So unless you have some blockbusting business, don't bother your gold, keep leveling. If I'm looking at the right Larísa, you are alchemist-tailor. Don't level these until lvl80 is reached, just quest. Sell the cloths you find, those who race for slvl 450 will pay any price for it. Until leveling there is only one thing that NEEDS money and this is cold weather flying. You can buy it easily.

At 80 you will have several options (daily quests, farming, selling BoE tailoring stuff) but unless you start a business (buying and selling a segment of materials) you'll always have just a few golds.

I must admit a very insiteful blog which has gave me a lot to think about, i have alsways struggled with my spending ways but lately i have been so cautios, thanks foir the excellant blog again.

I couldn't pass the 2k gold mark until the wife started playing.

She asked back then why was I vendoring some stuff. I told her it was junk. She then check the AH and voila it's for sale!

Later on she got me 5kg in 8 days just by ores and playing AH =) and this was when all she knew was to do some daily quest. I never imagined having an epic flying mount before /cry