From the hours you can guess I like this "game". Technically I didn't finish it on the highest difficulty, because the map is huge, so will take some more hours to even find the other factions which I must defeat or ally with to win. But I'm doing OK: 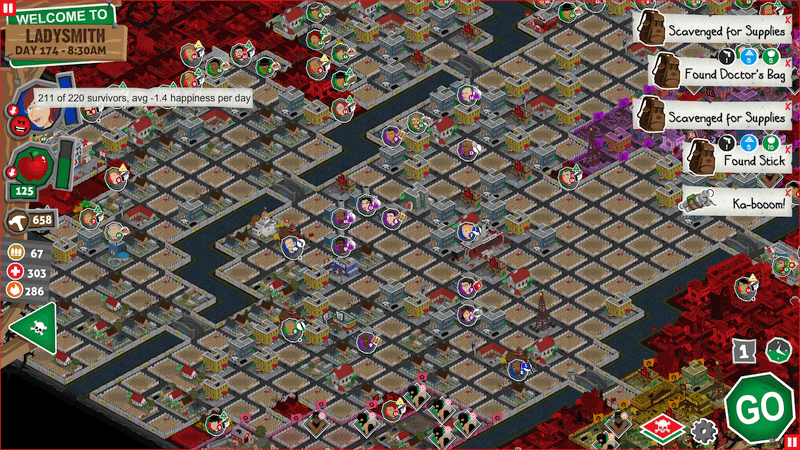 No, this isn't my fort. It's just part of my fort. But unless the "game" will show something I haven't seen in the previous difficulty and building the current gigantic fort, it's only matter of time.

Now, why do I claim that it's not a game? Because it has no more replayability than a TV show. Sure, I can watch it again out of boredom, but I have no reason to do anything differently. Even worse, if you read the spoiler below, you can win on highest difficulty, largest map, max opponents on first try. Puzzles operate on obscurity, their fun comes from figuring it out. The optimal way of solving them is reading a spoiler, which makes the task trivial, while of course spoiling the fun. However if we play to win, we must choose the optimal path, read the guide and - then have no fun while doing a trivial task.

So with puzzles we reached a reductio ad absurdum: if someone plays them like they were games, they are unchallenging and unfun. Which shouldn't surprise anyone: it's true for any kind of entertainment outside of actual games. For example: Caesar dies, Brutus dies too. Here, I saved you a hundred bucks and a travel to the theater to watch the Julius Caesar play. But of course your point of watching a theater play isn't to get the outcome, but to enjoy the story unfolding. Good for you, but not a game. Neither Rebuild 3 or any of the puzzles out there.


Spoiler: ignore unhappiness and food at the start, you'll lose survivors, but it's easier to replace them than keep them alive. Get laboratory early and research improved scouting to see every resource on the map. Scavenge. Get a workshop fast and build bombs. Don't defend the fort, blow up the zombie hordes instead and instantly capture the rubble. Hell, if you have no bombs yet, don't defend either, easier to recapture what the zombies take from you than holding it.
at 03:00

How does RNG fit into your definition. Say we are both playing blackjack/21 at the same casino. At the end of the night, I won more money. I had a better score. The analysis shows the math is clear, you made better decisions. You clearly played better.

Or we are dueling in say WoW. Everyone agrees you played better than me. But your last two big cooldown attacks do less due to rng saying I dodge/mitigated while rng said my biggest spells/cooldowns critted for double damage. You die. I won the duel. Probability being what it is, if I win the reduel, we can't say I am the better player. Or even if I beat you 50 straight, although it is getting increasingly likely.

RNG is deliberately added to allow, unlike chess, the worse player to win. I had a friend, while disparaging his ex, talk about them playing backgammon because there is no way she would ever win in chess.

So games (unlike EVE IMO) have victory conditions and winners and losers. In the long term, a player's skill will determine their ratio of wins/losses. But for a subset of games, perhaps the majority, in the "short" (could be moths) term, the better player could play better and still lose. Is it still a game if the person who plays the best loses? What does "winning" mean if the worse player can play worse and win two or three times in a row?

"Now, why do I claim that it's not a game? Because it has no more replayability than a TV show"

There is a game called Final Fantasy Tactics. It is a "single-player puzzle" in a medieval renaissance fantasy setting so robust that, having played it for years, i still don't know all the optimal strategies. However, at some point you get a couple overpowered characters that reduce all the game's complexity to basically giving them the best gear and abusing their few skills.

Then there is a difficulty hack of this game, called Final Fantasy Tactics 1.3, which mitigates this problem completely and gives you a game with a great deal of replayability, despite being single-player.

The fact that Rebuild 3 has low replayability simply means that this is its limit as a game.

Incidentally, reading a guide does not necessarily remove all the fun.
Though, of course, applying a guide properly, using it to skip the tedious parts while not letting it interfere with your fun, takes some gaming experience.

Just to clarify, the source of FFT 1.3's replayability is that it has a way of crushing any single strategy you come up with, even if said strategy seems to have no holes in it for a few battles. Even if you are an experienced player with a plan, the game will still find ways to mess with you. The only way to "solve" that puzzle for good is to straight up manipulate RNG, which is a bit like "solving" poker by having a friend tell you their hands.

I loved the original FFT.
Yes, there were some skills that worked from low to high level opponents, but it was never OP as the game set you agains a horde of high level ennemies where stunning or immobilising single ennemies was no longer efficient...

Is FFT newly available now? I mean other than iOS cell phone crap?

You seem to gradually arrive to Chris Crawford's defifnition of the game:

I don't get the point of these posts, you're just trying to define "game" differently than most people would. What gives?

The definition is more or less arbitrary. One might argue that your's is indeed more useful, but unless you convince the rest of the world to adopt it as well it's pointless all the same.

Following your definition, I think the only items that are still allowed to call games are PvP games, as everything vs PC is able to be optimized, and in most cases, trivialized.

Or is the argument that puzzle games are no games except for the persons who play while a guide has not been written yet?


Also, regarding books and plays: I am the person who has no issues with plots being spoiled/knowing the ending. I enjoy the journey the characters takes as much, if not more than the ending of the play/book/series

@Caldazar: no, if the PvE game tests human skills like hand-eye coordination, quick reaction to random events or group-building. For example I do accept WoW raiding as a game. While guides exist and actually mandatory, they are still not completed by most people on mythic, because they lack the muscle memory, the will to earn it and the social ability to ditch useless friends and join with fellow good players.

Fair enough, so at the moment if I understand correctly, PvP and 'Twitch-skill' both qualify as a game.


If no guide existed for Rebuild 3, and you had to figure it out for yourself, would you consider it a game?
Do the Assassins Creed series count as a game? The is Twitch-skill involved (although I find it incredibly easy, that does not mean it is easy for everyone). I find for me they have no replayability once I have played em once.

I didn't read guides, so it was a "game for me". But that's as good as Arthasdklol's "im having lotsa fun with dk tanking in sexy priest skirt".

A game is testing your skill with all enforcable rules, without adding personal "rules".

I'm not entirely sure if I agree then.
I don't think the existence of external aids make it not a game. If they were included, sure, but by your metric you can say 'Chess is not a game' because it would be optimal to use chess programs to play for you while you are playing others (since it is very likely the pc is better than you). I don't think that makes chess not a game. The way you are playing it is indeed not game-like, but it does not detract from the game itself.

Of course this only applies to very narrow definition of "puzzle game". If we count Final Fantasy Tactics as puzzle - there are much more such games.

@Caldazar: using a better "player" playing for you is just cheating. Chess programs respond to the moves of the opponent, so they aren't a guide (unless you consider it a guide to have a book giving you a tip for all 10^100 possible chess setups)

@99smite
My recommended way of play is emulation. That way, you can get tons of extra content through modsites like ffhacktics.com

@Gevlon
The only difference between enforceable rules and personal rules in most non-computer games is that enforceable rules are socially reinforced. However, they can also be socially rejected
Computer games have the advantage of strictly limiting the kinds of interactions the player can have in them. And, even then, people find ways to circumvent them (and, in fact, finding ways to circumvent the rules is its own game)