Fortnite: hoping but not expecting

Fortnite is a newly released (Early access from July 25) game with lot of potential and charming graphics. 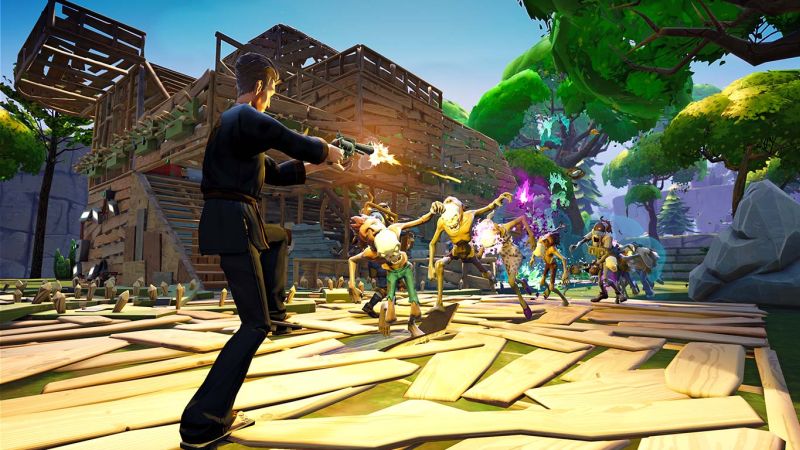 The "revolutionary" element is that you are building a fort on the fly, in the middle of the battle from resources you gather during the battle while killing zombies with weapons you craft on the fly. This means quick thinking. Also, the maps are randomized with various enemies, so there is no "check out uber fort on youtube and build always that". Finally, it's a team game, meaning a perfect place for testing a-social ideas, working with other good players instead of "friends".

Are you excited? You shouldn't be. Because even if we assume that everything I collected from their promises is true, we don't know anything about the most important thing: is Fortnite even a game? I mean, will there be winners and losers? Will it matter if you build the best fort with the best team compared to 4 ArthasDKlols: Will the optimal team achieve anything that the second team doesn't? Or will the difference will be only in some meaningless achievements and maybe 20% more rewards? Will there be exclusive content available only to the best players (like platinum league in LoL)? Or everyone will get everything assuming playing enough?

Another question: how bad the monetization will be? Will playing matter at all or results will only depend on paying, like in the mobile crap?

Finally, assuming that the formal rules are fine, there will be winners and losers, monetization will cap out around $50/month, will the game be fair? I mean will it operate according to the rules or will it give piss-easy random maps to those who bought vanity? Will exploiters be banned or laugh together with devs on "Fanfest"?

The sad thing is that these questions had been crazy paranoia just 5 years ago, while now 90% of the games out there violate one or more. I'm really, really hoping that Fortnite will be good. But I'm not expecting it, and until they prove themselves, I won't give a damn dime.
at 03:00

I am not entirely certain, how 4, 40 or 40 million arthasdklols playing the game validate or invalidate my own experience of it

The Arthasdklols are just canaries in the mine. If they can progress, it means that the game is piss-easy and if you find the game challenging, you are either a hopeless noob too, or self-deluding.

Its not really on the fly at all, for nearly all maps you choose when to start the wave, meaning you could have farmed a massive superbase to defend the horde before it even starts.

Heh. All levity aside, I have an actual comment:

On:
"Will the optimal team achieve anything that the second team doesn't? Or will the difference will be only in some meaningless achievements and maybe 20% more rewards? Will there be exclusive content available only to the best players (like platinum league in LoL)? Or everyone will get everything assuming playing enough?"

It's a PvE game, so you can expect the latter, that everyone will get everything assuming they play long enough.

If they make it too hard it will go belly up and die. Why? Because market forces. If the game is hard, and grouping with better players cheeses that difficulty, (Which it always does.) then it will drive players to use premades to destroy content balanced for random groups. This drives the content to be harder, which closes out the random groups.

If the game is too easy, or premades are not allowed, it will devolve into a "GO GO GO" zerg fest, also because of market forces. Easy content + rewards = more rewards for doing content faster.

I'm going to watch this game to see if and how they solve this. I expect that they will make it easy, and buffer the group game with a single player "build your avatar" mode ala LoL to get you too hooked to quit (Sunk cost paradox.)

@Smokeman: there is an obvious solution for this problem: both easy content for some rewards and hard content with big rewards. This way the gogogogog kids can have their fun and players too.

WoW does it right: Anyone can complete LFR and get some crap while Mythic is hard and gives gear. The terrible mistake of WoW is catchup mechanisms that makes all previous effort (both LFR and Mythic) pointless