I wanted to wait till mid-Autumn because daydreaming people still claim that losing 1/3 of the activity in 4 months is "just Summer dip", despite Augusts were always better than Julys. There is no need to wait, as CCP made the last "Hail Mary" move of MMOs before pulling the plug: going free-to-play. So EVE is now officially in terminal state and its demise will be accelerated by the armies of throwaway gank/ECM/lagmaking alpha accounts. Reddit was fast to respond with megathread, another and great graphics (check the sail of the lifeboat, it's the work of a master troll): 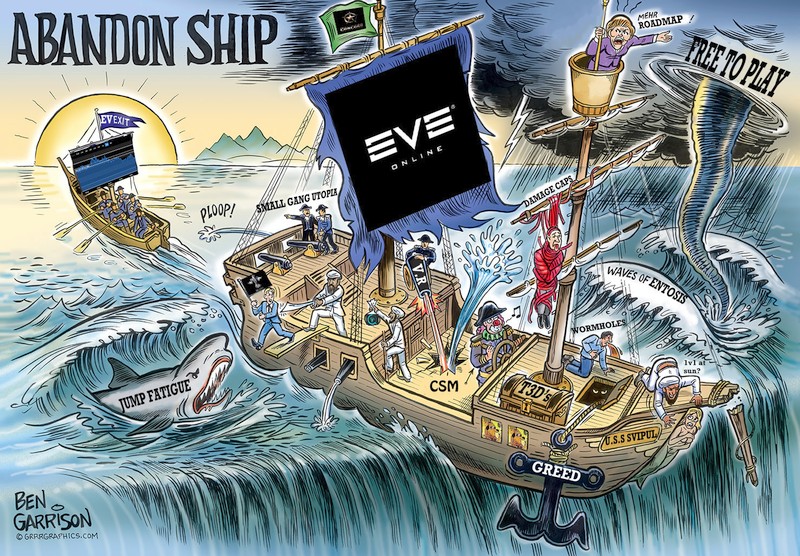 No, I'm not going to take credit, my "Don't play EVE Online!" page is a mere messenger of the facts, I probably saved a couple hundred players from figuring them out the the hard way, but they would get the same conclusion after a few months of suffering anyway.

First thing first: EVE was stable last year, even shown growth in 2015 second half. If you asked me or anyone last year this time about the fate of EVE, we'd say "stable, maybe slow decline" and "not unprecedented drop and CCP dropping the towel, going F2P". We can safely say that if the last year status quo lived, the game would be at the same state or only a bit lower. But the status quo changed a lot in the last 12 months. The "undefeatable" Imperium was destroyed and their remnants were evicted and chased away. The new king of the hill on the other hand is not a new coalition full of players, but the I Want ISK site.

Let's see the four clear differences between IWI and all previous kings of the hill: Let me summarize these points: you are defeated, everything you do in EVE is irrelevant, there is absolutely nothing you can do about it and it's not going to change in the foreseeable future. No wonder people don't want to play. The critical problem is that not only actual damage was done, but good faith was lost. Even if CCP would ban all "casino" sites and all "bankers" and undo the broker fee changes and negwallet everyone who made a few trillions on the Jita citadels (besides casino bankers who are already banned), many departed people wouldn't return. I sure wouldn't. I wouldn't believe "they saw the error in their ways and improved", I'd say "they got caught, now they cry and beg and promise the Moon but as soon as we're not looking, they'll be back at betraying players for their whales/friends/bribe-givers". They got a second chance after Incarna. With Citadels they did something much worse. No more chances for CCP, not from me, not from the legion of players who stopped playing in the last months. They are going down.

At this point the only way to save EVE if CCP outsources operation, like they did in China. If CCP would just develop the code but the day-to-day operation would be at the control of a reliable partner (not some project company founded in 2016) then maybe. EVE, I mean the software implementation and the official ruleset is still the best on the MMO scene. With stewards who enforce the rules instead being champions of breaking them, EVE at least has a chance of flourishing again. In the hands of the totally corrupted community team, it's game over.


PS: and now I lose myself in imagining CCP Falcon trying to find a new job with the "No1 reason his last workplace bankrupted" mark on his forehead. I'm only doing it for 5 seconds yet and my smile is already wilder than when the Goon Kickstarter failed.
at 03:00

Um, you do realize that CCP is actually shutting down IWI by the removal of the In-Game browser?

As far as I recall, they did state that casinos will not be permitted to use the new API.

I'll believe it when I see it. If the API provides transaction log, the casinos will be fine.
Also, IWI don't even need the casino anymore they have have New Jita

There is a saying
Companies die first slowly then suddenly.

They just tipped the balance by changes. But such drop was destined to happen sooner or later.

Also totally agree on the fact that companies should not listen to players.

I see you interpret the activity graphs in the same way as I do. Particularly the Serenity side. Interesting.

F2P model isnt going to change anything. It is just a sign that CCP is desperate.
There is 1 month trial for years. Most of the new players quit in less than a week.
The game will get F2P tag so ppl on steam looking for F2P games will find it. Which might bring few more players in short term. In long term F2P tag means the game is bad and not worth paying for, which could lead to current players leaving the game. After gutting the game even more, the only thing left will be selling the EVE brand or the company because CCP dev team isnt capable of making a good game(s).

totally agree. soon(tm) EVEs server will be hosted by gameforge with a ridiculous shop scheme and bad ping.

Hardgames are for the past. look at legion, give WoW 2-3 expansions and they could go easily on tablets and smartphones.

I've been saying this for about a year but no one took me seriously.

It's been obvious for a long time that player logins are declining and CCP is just trying to get everything they can out of Eve before it dies.

First you had SKINs at frankly ridiculous prices. They don't even look unique most of the time and are ship specific. Low effort on their part, high return on investment.

Then they introduced skill injectors. Skillpoints, being such a fundamental thing in Eve, are suddenly allowed to be directly traded after 12 years. They didn't do it for the good of the game or player convenience, they did it because it will bring in a huge cash infusion. After all the demand for PLEX rises significantly in order to buy extractors.

Now it's going F2P, and CCP has done nothing to enhance the New Player Experience (lol opportunities) so player retention will be just about the same. Maybe they're hoping for a lot of free publicity for going EVE IS NOW FREE TO PLAY. Too bad that the free accounts seems to be just an infinite trial account with EVEN MORE restrictions than the old trial.

It's Eve's final nail in the coffin after a year of blatantly nickeling and diming their playerbase. Probably intended to be on CCP's part. I have honestly no idea why because Eve is their only succesful game and they treat it like shit. The VR fad isn't going to save them.

Anyways, sorry for ranting. I'm just so angry they finally killed off an unique game like Eve.

the F2P model is changing a lot!

alpha-ganking: (as gevolon already mentioned)and i also see this comming. Normaly I pay attention that my chars have some honor (roleplay bullshit for most of you) in a game, I don't like ganking and all of my 3 Accounts are full. Or at least ganking was not worth to spend a char slot on one of my payed accounts. BUT totaly different with a free account (who cares about that, it's a disposable object) and 5M skillpoints in Galente are enough to fly a ganking Catalyst. Who cares if I fail 10 out of 15 times, it's a trash clone. Everyone who never thought about a ganking char, because he had to activate a new subscription, can now build a ganking char for free. And because they are free, you can create one for each ganking system like Uedama, Niarja and some well used mining systems (0.5 to 0.6). And this will drive out high-sec carebears, that love to mine and pay for that sweet little mining char. Who will play a game where you have to pay for your mining expert (flying Retrivers, Hulks etc.) when a cheap little f2p char can fly by and shot you out of space... (ok a any other subscription account can that too, but at least someone who pays kills you) that would be a bad trade.

Yea CCP is right, Accounts will increase. But 95% of that are ganker-, scouting-, scanning-alts. I might be wrong, but I had this in other MMOs they became f2p, and never changed to the better.
A F2p-Community is different from one that has to pay a subscription. If you pay for you account you take care of the chars (or at least I do that). With a free to play char I realy don't care, because I can create a new one at will and anytime I want.

Yes, one of the final nails in the coffin that buries EVE.
Alpha clones will be seeded like mad as scouts or even simple dps boosts. having several dozen caracals shooting structures will help.
f2p players will be content for sub´scription players in pvp unless they hop into a catalyst and gank untanked miners...

@ Gevlon: FYI Marmite is dead too. They did wardec a merc corp, but refuse to engage in any fight.Hours and hours of friendly smacktalk in local and several merc publics did not make Tora Pussydo undock. They play dead and can only gank T1 haulers...

"Also, IWI don't even need the casino anymore they have have New Jita "

What New Jita ? There is no New Jita, nor there will be one considering how trivial citadels are to get rid of (overpriced Palatine nonsense including).

The offshoring citadels are called collectively as new Jita. Indeed I expected one big because I forgot remote orders. Technical difference only.

"The new king of the hill on the other hand is not a new coalition full of players, but the I Want ISK site."

This one is the most detrimental one in my opinion.

The death of the ingame browser doesn't mean the end of IWI at all, you can do (or will be able to do) everything in chrome the same way you can in the igb, thanks to CREST.

The only thing that is killing Eve are its own players.
You prefered to stay docked along with two hundred constellation inhabitants instead of fighting a 5-10 man roaming gang?
You decide to blueball and nip instead of constant scirmishing around?
You play raffles and other casino bullshit instead of building your own schemas and empires?
You camp the nearest hs gate instead of getting good and participating in AT?
You make your own game time miserable and uneventful and then say that game doesn't throw a challenge and looks boring?
You wank orders by 0.01 isk for years instead of forming your own hub?
You run missions every day instead of running an LP buyout program for locals?
You watch intel channels and bubble 3 jumps away from your care bear dead end system and complain that nullsec is a dull desert?
You became so risk averse, you don't fly things you can't afford to lose, you say FLY SAFE and claim that game doesn't wake any feelings or adrenaline?

I've got bad news for you.