There is some error with my RSS feed, Blogger.com suggests using ATOM. Please update your feed list to http://greedygoblin.blogspot.com/feeds/posts/default


You might heard that Travis Musgrat threatened NC. diplomats that he'll stop FC-ing if he can't kill Pandemic Horde newbies. Ganking newbies whose FCs can't even shoot back because he is blue is pretty low. It's as low as PL ganking BRAVEs. They brag about "elite PvP" all day while what they do is literally easier than miner ganking (miners don't line up at a timer and at least Concord can return fire).

Anyway, the name was familiar, so I looked my old mails and found the ones below. As usual, if Travis claims they are forged, I'll just delete the other mails and publish my mail API: 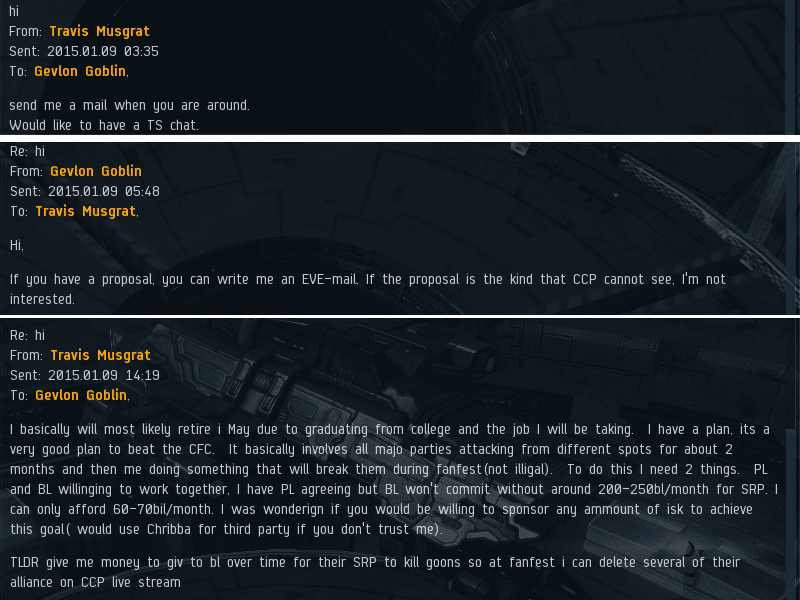 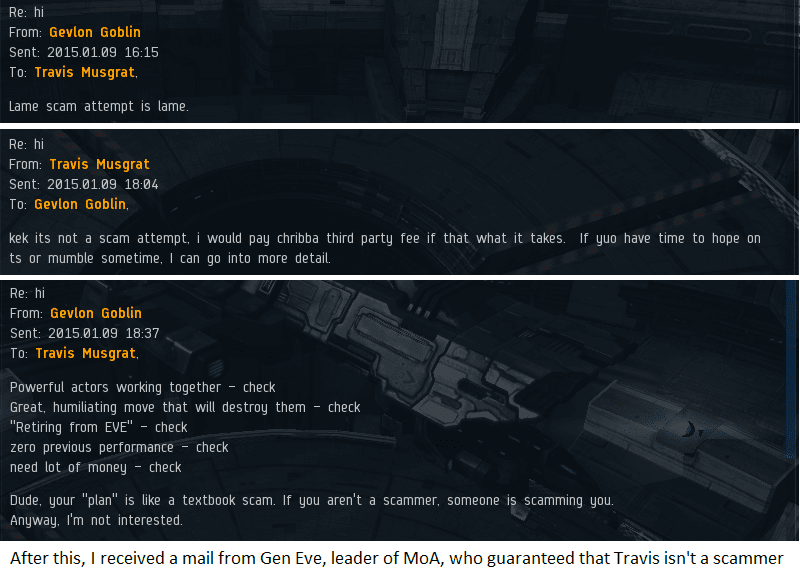 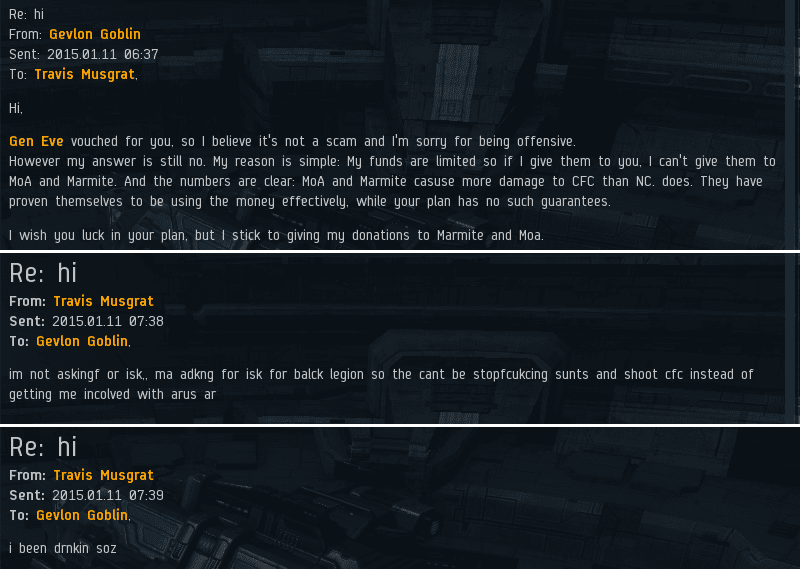 What can I add? Fanfest ended without Travis or anyone else destroying the CFC. Their invasion against Fountain ended with decisive defeat and Travis isn't retiring from FCing. If I'd believe Goon propagandists who tell me to hire PL or NC, I'd lost 100-200B. But luckily I knew NC. is useless, so I gave them nothing. Actually I figured out that NC. is useless a few months after starting to play.

Why is NC. useless? Because it's led by people like Travis Musgrat, who think that planning an invasion includes drunken begging. If you are an NC. line pilot who joined for elite PvP, I'd suggest to quit and apply to a MoA corp. Those guys have 70%+ ISK ratio (without using inflated kill numbers) against a 30x outnumbering enemy.
at 03:00

Simple: I don't want "metagaming" people to contact me with their shady offers and super-secret plans that will totally work.

Contact me only if your offer is something you'd announce publicly, because it fits into your official strategy.

For example my mails with Gen Eve or Massadeath (leaders of MoA) contain technicalities about fighting Goons. Battle reports, requests for certain statistics, copy-pastes of Goon tears for the blog. Everyone knows that MoA is fighting Goons, there wouldn't be anything interesting in them for anyone else.

But this isn't so black and white. There is a huge spectrum between announcing something publicly and metagaming with shady offers. People might want to just discuss ideas, ask advice or whatever. Hell, even Gen Eve is probably careful about what he writes in his mails, since you guys might now be working together forever (like with Marmite), and then there are no guarantees that whatever was said in confidence between the two of you will remain private.

Your goto excuse for the lack of actual effect on the CFC, has been "If only more people joined me!" But nobody will ever join you if any mail they send you can be made public without any warning. Hell, even if it does fit into their official strategy, that doesn't mean that they want private email leaked.

I don't know, I just think it's really weird to publish this, especially since Travis hasn't (as far as I know) antagonized you or provoked you in any way. I can't see any benefit from publishing them, the only thing I can see it doing, is hurting your project.

Travis did wrong me: he - along with other "elite PvP" leaders - are luring competent pilots into their failure alliances which are practically newbie gankers. These pilots should be in real elite PvP alliances like MoA.

I still fail to see why this is "public interest", apart from you thinking you had been scammed and being so super smart as to not fall for it.

Goblin was within his right to publish these e-mail, and he is right about NC/N3.They were wasting pilots on creating a renter empire over taking down goons like they said they would

In the end NC/N3 became what they hated, big, bloated, and fat on isk.Despite having a renter's empire they still ask for isk? Talk about gross mismanagement.

Damn, I wish we could read more often some of the mail you get from some people in EVE.

Anyway, I am personally convinced that Musgrat and other 0.0 could achieve much more, if they had enough funds, oh wait, he only asked for 200B? Shouldnt a handful of NC. whales be able to give him that like every month?

The fact that such a cheap sum (on an alliance and coalition level in 0.0) just shows that leadership do not want to completely destroy their "ennemies"...