After the previous post, I made a much more comprehensive analysis, using the July kills, Aug-Sept kills, July losses, Aug losses, Sept losses and birthday data (not complete, many had to be loaded manually). This analysis shows every Goonwaffe pilot who had any killboard activity in July-Sept and born before this period.

At first, let's look at the birthday distribution of pilots who were active in this period: 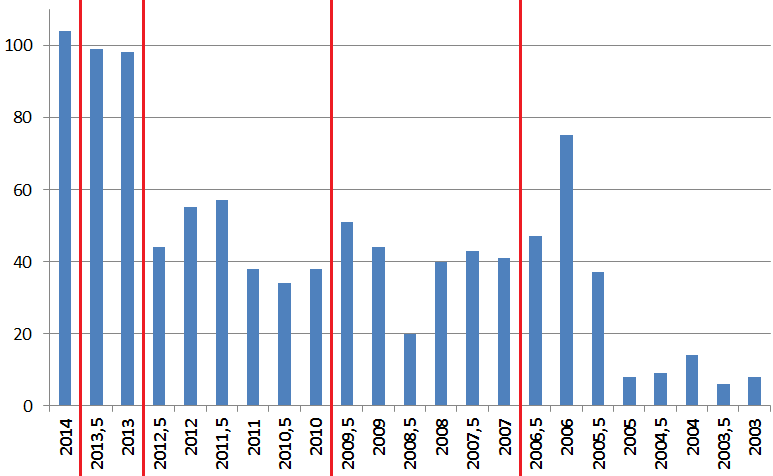 There clearly are new pilots in Goonwaffe, 104 out of 1010 was born in the latest half year. Still, the vast majority of pilots are old, the average birthday is 2010-06-16. It's interesting that large number of new pilots started to appear in 2013 and this trend seems steady. Let's look at their performance against non-blues, after placing them into 5 age groups, divided by the red lines. If N pilots killed a ship, they all got 1/N kill and Value/N ISK:

So far it doesn't look bad. They fly cheaper ships than average and have less kills, but that's expected. But instead of averages, let's look at the performance of the individual newbies (every bar is one of the 104 newbies): 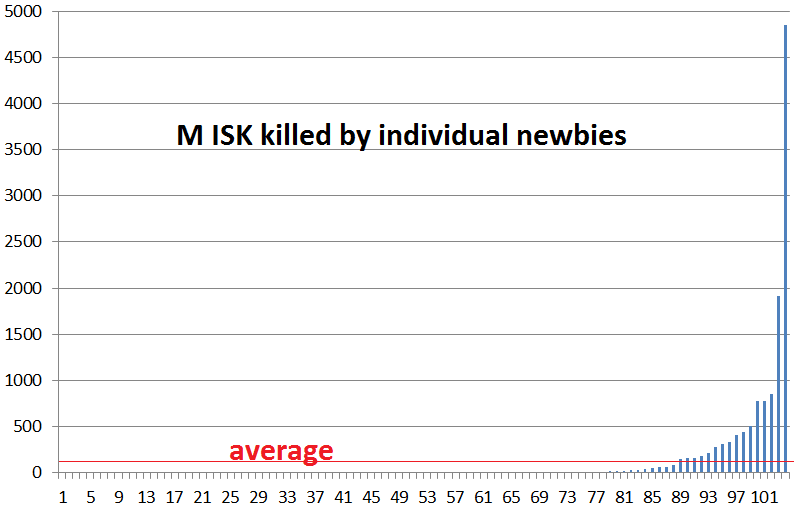 It's not a long shot that the few above-average "newbies" are actually new alts made for frig PvP. The rest show what really awaits the new players in GoonWaffe. If we add that GoonWaffe had 2500 pilots and only 1010 had any PvP activity during 3 months, it doesn't take a genius to figure out where the bright eyed newbies ended up: in the anomalies, making the leadership rich.

People do not tend to make new alts to fly frigates in for fun frigate fleets. Frigates are demanding to fly and often fight at tight as can be.

People make alts for groups like RvB and even then they train them up and don't just recycle them for endless brand new characters.

I know that you have no respect for people who enjoy frigate combat but really, Gevlon.

gevlon, you seem to be missing the point of the term 'newbie friendly.' Possibly you are confusing it with 'largely composed of newbies?'

In any organization as long-lived and established as goonswarm federation, there are going to be a lot of old pilots. Eve is a hard game to pick up and a harder one to enjoy, and so the new player attrition rate is rather high. Conversely, old players of eve online tend to come back eventually, like an addict that can't quite kick the habit. Your statistic proving that gsf is largely composed of older players is thus pretty meaningless. Not that it meant anything even if it weren't easily explicable, since, again, you're missing the point.

Pandemic Legion? Not newbie friendly, because they only recruit established, experienced players and expect a high degree of competence and self-reliance from their members.

GSF? newbie friendly, because they have comparatively low skill point and skill requirements for most corps. Indeed, the requirement for joining goonwaffe is precisely zero sp, although obviously there are other requirements that have nothing to do with skills or experience in eve online.

Furthermore GSF has an extensive system in place to educate and support newbies, and ensure that they have fun insofar as you can do that in eve online, until they find their feet. Examples: boot camp subforum, training roams, squads, mentors, the wiki, help channels, and of course tons of free isk just for asking adorable questions like 'how do I jump???'

Goonswarm federation is one of the best places to be a newbie. It is far, far better than scrounging a living in empire space bereft of all but the most basic support structures. And that is why it is newbie friendly.

Really, I should have though that all this was obvious. But I can see that you're intent on looking at precisely one statistic and extrapolating entirely from that, so I guess keep doing that.

There is only one criteria of newbie friendliness: how many newbies they can attract and hold. I can yell how friendly I am, if everyone runs screaming from me.

Looking at ISK killed by newbies is incorrect: because of EvE skill learning time it is obvious that newbies will do less damage than veterans.

Also, looking at newbies not killing anything is biaised because part of them will stop playing whereas veterans who stopped playing are not counted (they would eventually get expelled also).

If we attract and hold newbies AND make people scream, what does that make us?

@Gevlon "There is only one criteria of newbie friendliness: how many newbies they can attract and hold."

However even this supposes that the recruitment mechanism of the corp is the same as the wider game, which is true for most but false for GSF.

but when the recent force projection nerfs were announced one of the points raised by goons was "how will newbies be able to join us at our nullsec base if they cant clone jump when they first login to the game?"

@Minmatar: would you call a gun shop "child friendly" if they'd sell guns to children? Or rather, the opposite.

Nullsec itself isn't newbie friendly, as without any game knowledge they have to fend for themselves against veterans. Their income sources are limited to picking up scraps (literally) after veterans.

So I say Goons do a disservice to newbies by recruiting them instantly instead of letting them stay in highsec for a month to familiarize with the game and get into ships that can actually defeat a belt rat. The numbers reinforce that, most Goon newbies failed badly against the numerous enemies of Goons, scoring zero kills.

Actually, Gevlon has the technology to determine "newbie friendliness"

This gives a distribution of birthday for active pilots.

Now, draw the same chart for PL. Or for Eve pilots in general (Pick a random region or whatever)

Then compare the shapes of the graphs. It will tell you how "young" the organization as a whole is. If it is "lumpy" it will tell you that there have been times when recruiting has been uneven.

@Ael: by this logic, the most newbie friendly organizations are the ones that recruit and awox newbies one system outside of the career agents.

Actually, I think that the most newbie friendly "shape" would be a linear wedge, more newbies dropping smoothly down into veteran numbers. They accept many new players and the new players stick around except for "natural" attrition.

If the shape was a huge number of newbies and then a dramatic fall into old veterans, then it tells you that all the new players quit quickly.

Alternatively, if the shape is a very small number of new players and lots of vets, it tells you that they don't accept many new players.

I see you took the 'continue extrapolating from one statistic' to heart.

Again. Gevlon, you seem to be confused regarding terms. You seem to think gsf should be a newbie organization, that is, an organization composed primarily of newbies. This it is not, has not been for years, and indeed cannot be, because it has so many old and skilled vets. What it is is newbie friendly, and this, as described above, is a matter of culture.

An organization's status as newbie friendly, or not, should be dictated by the question, 'if I join this organization as a newbie, how much fun will I have? Will I be catered to? Will people scoff at me, or support me and patiently answer my questions?'

So, many questions really. This sort of thing cannot, in fact, be quantified by a statistic you pulled off dotlan, as much as you seem to wish that were so.

And haha no fuck the empire starting experience, its awful garbage that shows off the absolute worst part of eve, the pve. If you don't have the option of joining a newbie friendly alliance you best option by far is jumping into faction warfare, where you might have some actual fun.

There is only one criteria of newbie friendliness: how many newbies they can attract and hold. I can yell how friendly I am, if everyone runs screaming from me.

Newbie friendliness is whether newbs are WELCOME or not. Objectively newbies are welcome in CFC and are not welcome in PL/N3 etc.

You are setting the criteria to fit your interpretation. Bad science.

Actually, I think that the most newbie friendly "shape" would be a linear wedge, more newbies dropping smoothly down into veteran numbers. They accept many new players and the new players stick around except for "natural" attrition.

That maybe true a number of years ago when the composition of goons was newbie heavy - but if the newbies back then stuck around, eventually they are goign to build a solid veteran core. Couple that with a reduction in recruitment capacity (eve is pretty much at saturation, recruiting ever-more newbies is difficult) and you end up with "less newbs than vets". This is entirely expected and doesn't at all indicate that they are not newbie friendly.

Newbies is most welcomed into awoxing corps that hunt outside of the career agents. So they are the most newbie friendly.

I believe PL is more newbie friendly by NOT letting them to go where nothing but failure awaits them.

If you believe that newbies shouldn't stay in highsec because PvE is terrible and PvP is fun, than Goonwaffe failed hard as most newbies get zero kills in three months.

Hm... Eve game mechanics dictate that one can only achieve any decent results in pvp after a certain day of training. Even a highly skilled pilot will not be able to successfully pvp on day one against a decent opponent.
So, naturally, people tend to show up on killmails only after a certain time of skilling.

Anf for the linked fight? Dear Gevlon get informed and watch RnK's Clarion Call 4 and let Lord Maldoror explain to you what exactly a pipebomb is, why it is so efficient and why there usually are no survivors on the ennemy side and rarely losses and the pipebombers side...
Jeez...
And, please, do not mistake newbie-friendly with "consisting basically of newbs".
With the same mindset you could throw shit at BRAVE/HERO as there are a lot of old and experienced pilots too...

Did not get the morale of this post, unfortunately...

Would a gun store be child friendly if it allowed kids/sold guns to kids? Within the bounds of the law, absolutely yes!

Let's say I'm a parent and my daughter is interested in shooting. I go into a gun store and ask the storekeeper about guns that would be suitable for my little girl to learn to shoot. Of course I'm a.customer, so the storekeeper will try to make a sale.

However, there's a difference between a storekeeper who tries to sell me a pink rifle and one who goes the extra mile to identify what my girl can handle, and also a gun she can enjoy shooting in her teen and adult years. Such a storekeeper might also direct us to courses to help her learn shooting fundamentals and help me learn the things I will need to keep her safe.

Regardless of how much anyone likes the goons (and I am not one of those people), they do their best to educate their new members. That's as newbie friendly as you can get!