While I mostly play EVE, I wanted a game that you can actually play inside the client. While I left WoW as being a hopeless hive of "every AFK-er is entitled for every reward" game, the project ran by my girlfriend shown that it might not be the case. You see, the problem was that everything short of finding a closed, fix group of players (which needs 20+ scheduled hours/week) forces you to play with morons and slackers with no way to not carry them in the process.

The project used an out-of-game tool to find an ad-hoc group of players - just like the random group finder in the game - but with the ability to handpick them. For some weird reason, Blizzard implemented this into the game, allowing you to form teams in-game, even from different servers. So I resubscribed, she used the instant-max-level promotion to get a new tank avatar, and we tested the tool.

If you are raid leader or assistant, there is an extremely intrusive button next to the minimap, you can click it and it gives a pretty simple interface: 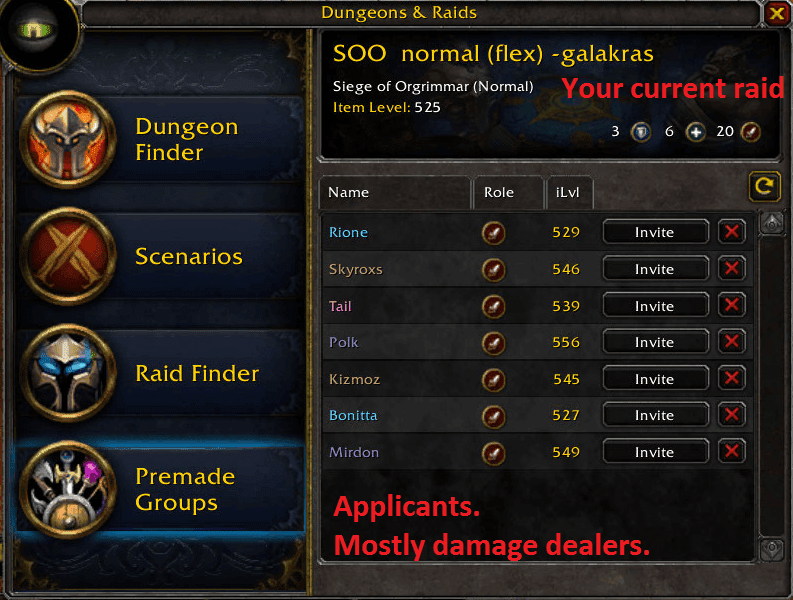 The list of applicants is filling very fast. Despite it's the end of the current content and gear is next to worthless, dozens of applicants arrive in minutes. Due to their numbers, I've found that it's better to not pre-filter them besides for role and obvious signs of uselessness:

After every kill or wipe, just open the damage and healing meter and check for people below the tank and kick them all: 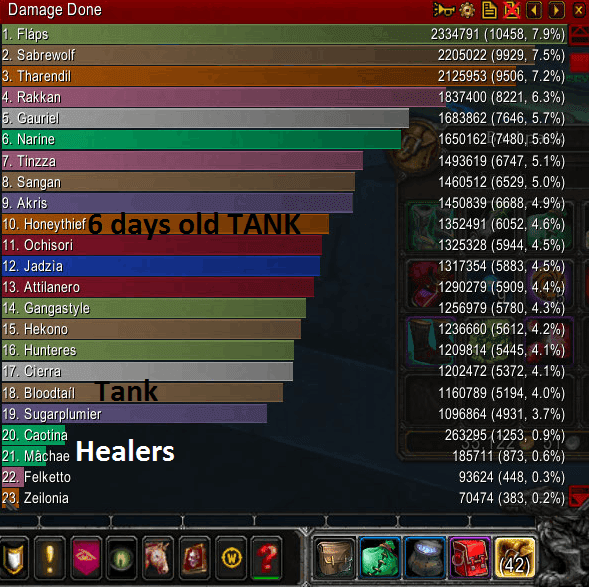 It helps a lot if you are a healer, so you can tell who died early without his own mistake. Being a tank helps because you see if the other tank is good or if the boss was mis-positioned (no damage dealer in the history of WoW ever admitted that his low performance was because of himself and not the tank or the healer). As we are a tank+healer, we can filter M&S very fast. Also keep in mind to be in a role that sees the raid to gather data and remember those who are not with you, but in the tower of Galakras or something. Their performance won't be visible on the addon.

All in all, this has the chance to be the Jesus-feature that saves WoW from its ever-shrinking subscriber numbers. You want to raid at 2 AM? You can find handpicked teammates! I'm only afraid that the cries of the kicked M&S will break the will of Blizzard - again - and they cripple the feature, like you can't kick more than 3 people from a raid, making it unusable (you need to kick more than 3 just because they are offline/AFK).


PS: other features of WoW are still horrible. On the picture you can see that victory points (how much the player contributed to the win) and honor gains (rewards) are strongly negatively correlated: 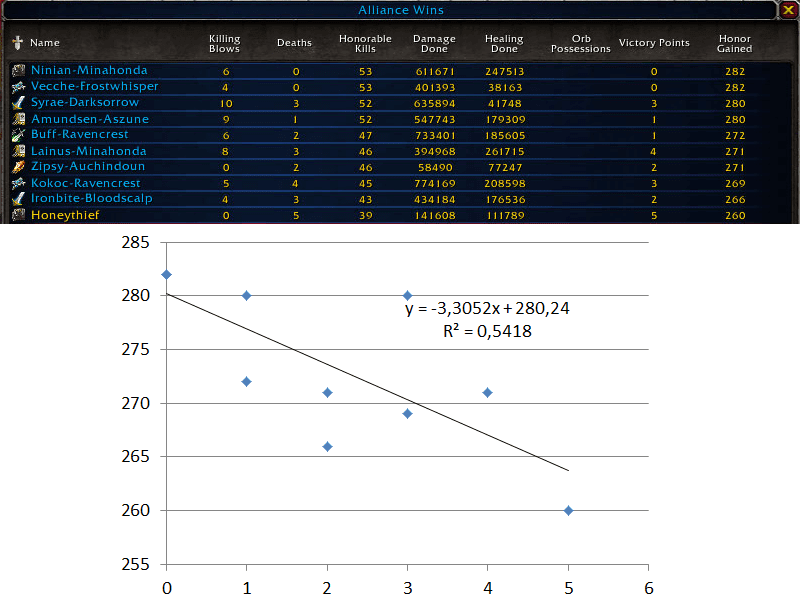 You're absolutely right. They'll patch it to work somewhere around as terribly as the party kick feature with some kind of decay or something. Enjoy it while it lasts.

Dunno, i believe doing half a million more damage to enemy team Is indeed worth more than 5 win points. 14 honor difference sounds about right.

Clever tactics are highly unlikely to win you the battle, unless somebody else carries you for a few million damage on the enemy team. WoW is not Ender's game.

I don't expect the ability to kick half the raid to last for very long at all. Just because you don't want to play with half the people in the game doesn't mean Blizzard should follow your wishes.

I'm not sure about the nerfs (this is why I'm back). The loss of 40% of their subscribers (which is worse than Incarna) may made Blizzard realize that they can't make me play with the worst half. If they don't let me play without them, I just don't play WoW.

They might realized that the cup isn't half empty but half full. It's not that I kick half of the raid, it's that I'm happy to play with the other half, paying subscription for myself and providing content to them.

@Gevlon
That's like saying "those tanks are exactly as useful as AFKers, they are tanking boss damage and not actually hitting his hp". If these top dmg dealers weren't there, you would be farmed at the graveyard.

If i want serious raiding i'll look for a serious group, not try to clear heroics with a pug. If heroics become clearable with a pug, then something is wrong with the design, which will alienate people a whole lot more.

You don't get to say that "you don't kick half of the raid" becayse that's pretty much what you proposed doing :)

I do believe that you would very much enjoy playing with the other half, though. I am that way myself. I also agree that everyone would benefit from a better method of separation of audiences driven by performance and audiences driven by curiousity / boredom.

However, allowing achievement / domination driven to kick out exploration / socialization driven is not the way, though. So i expect some limits to be imposed on said kicking before long.

It's HK related. Usually, if you're where you're supposed to be, you get HKs. Unless it's people picking fights randomly where there's no objective (flag to defend etc).

Points shouldn't blindly be given to people who do the actual objective, though. For example, as a tank, in Temple of Kotmongu, I get the orb and with a healer at my side I can survive forever. I pop some cooldowns, do some damage, but the healer and the other people keeping me alive are working just as hard or even harder - me, it's just my role. And if I'm not top HKs in the temple it pretty much means the fight wasn't where I was holding the orb, which in turn makes my job a lot easier.

I very much doubt that they will nerf the kicking ability for the new raidsystem. It is supposed to fill the niche (whats a niche called if its big?) addons like oqueue and openraid was filling. If it becomes too lfr-like, people will go back to using the addons instead.

I would probably disaggree with you on WHO to kick, but I am very much in favour of giving the raidleader/assistants full control over group composition :-)

I unsubed with WotLK. no more world pvp. They did some work and gave world pvp some attention. But I will sub when they remove pve servers.

The 5.4 item "Censer of Eternal Agony" http://www.wowdb.com/items/102467-censer-of-eternal-agony with the feature to be a 3. faction that can attack everyone, nearly got me subed back into WOW.
My guess is that it was a fun gimmick and nothing they ever think of building into a full blown asset.

With Ashran I already start to lose hope for world pvp. they call it world pvp but it isn't.

My worry about there being no kick protection is that a kicked raider will have to repeat a lot of bosses before they are eligible for any rewards.
My fix would allow the raid leader to see an applicant's raid-lockout and applicants to see the currently selected lockout. That gives a kicked raider more value to a prospective RL and means less repetition for the raider.

The assumption that VP is an accurate measure of contribution is simplistic, but I appreciate that since you top scored you'd like to think you were the MVP.

Since battlegrounds are a team activity I think it is key that the reward (HP) is mostly influenced by team performance. The ultimate measure of team performance is the end result which, in your example, has a positive correlation and an R2 of almost 1.

It is good to see you getting back to WoW a little bit. It tried Eve very briefly when you started writing about it but it simply wasn't my cup of tea. I continued reading your blog daily because I found your discussions about it interesting, even if playing the game was not.

Now you've given me a bit of hope that WoW might be more worth playing going into WoD. It seems to hearken back to the days of WotLK when we would put together trade chat PuGs and filter out the people who were not pulling their weight, but not limited to a single server population. This has become important as we get older because, as you said, I do not have 20 hours a week to dedicate to raiding anymore.

I hope you continue to mix in commentary on the new state of WoW with your Eve coverage in the coming months. At least long enough to make some solid conclusions about it's state after WoD.

This was already done through oQueue, which was/is wildly popular due to the cross-realm grouping possibilities. This is exactly why Blizzard copied the system and made it official (and they even admited to it).

I don't see why they would include a kick timer or something similar to a pugging tool such as this. If womeone wants kick immunity, he can go ahead and queue for LFR. The moment they introduce restrictions to raid leaders moderating their own groups, is the moment the tool dies and everyone goes back to oQueue.