I wrote how Mordus and PASTA are better off in smaller fleets as Goons and their endless swarm of minions blob the large battles, so their ISK efficiency isn't that good in large fleets. But this battle (BrDoc, Dingo) is an outlier. The evil ones shown up in Tengus and Ruptures, but forgot to bring logies. As a result, many died, the rest ran... but didn't get far (list of dead).

In the meantime, there are 6 Grr wars now in the top 10 highsec wars: 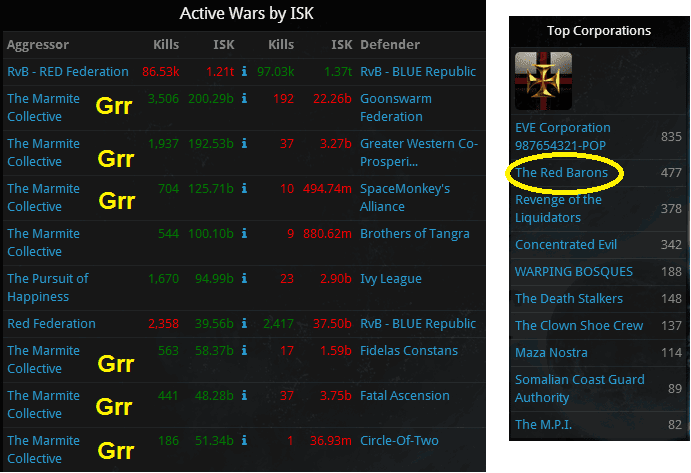 I wonder who will be the 7th? RAZOR, Bastion and TNT are all losing ships very hard to get on this prestigious list. Also, if you check the zkillboard list of "top corporations" of The Marmite Collective, you see Red Barons as #2. You know, they were formed from Lemmings and recruiting good PvP-er ex-Lemmings. So much for "Lemmings were a total failure and disappeared without a trace".

PS: Wilhelm Arcturus seems like a nice guy. I wonder why he sold his immortal soul to the evil. Anyway, he reported a glorious battle between PASTA and the minions of evil.
at 03:00

You realise that it's actually impossible for an ongoing war to continue ongoing and not eventually make it into that list, right? Since kill values will never go down, the amount the war has done only goes up. All that wars list shows is that those wars have been going on for a long time.

what a surprise. the wars which will not end are going to the top10.
also n3 would be in top10 and other alliances, if their wars would last. however marmite will stop the wars at one point, wait 2-3weeks and start it again. this is making it more effective.