Nosy Gamer had a brilliant idea: he placed the average concurrent user (ACU) data and several kill data to the same chart. Unfortunately, he only did qualitative analysis and only for kills. So I collected the monthly ACU, kill, jump and NPC kill data to analyse properly from 2013 Jan to 2014 June.

At first I built a correlation table. Correlation is a formula that tells if two sets of data has linear connection or not. The closer it is to 1, the better the connection is. In the case of y = a*x+b, the correlation between x and y is 1 or -1. However it doesn't tell us the value of a or b. It only tells "hey, x and y worth further exploring":

"Month" and ACU has a strong negative (-0.79) correlation, telling us to plot these against each other and expect decrease of ACU over time: 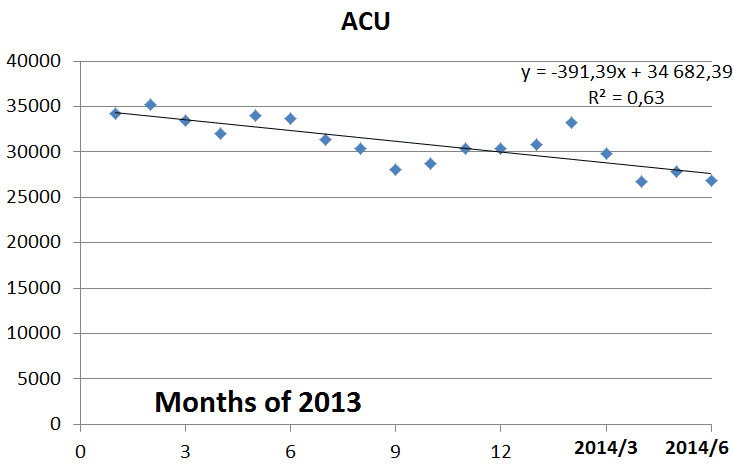 The highsec data has stronger correlation with ACU than with time. The numbers are over 0.8, so all kind of highsec activity increases well with more players logging in. To let quantities of different magnitude fit into the same chart, all data are now in units of average. "1.1" means that in that month the variable is 1.1x larger than its 18 month average. 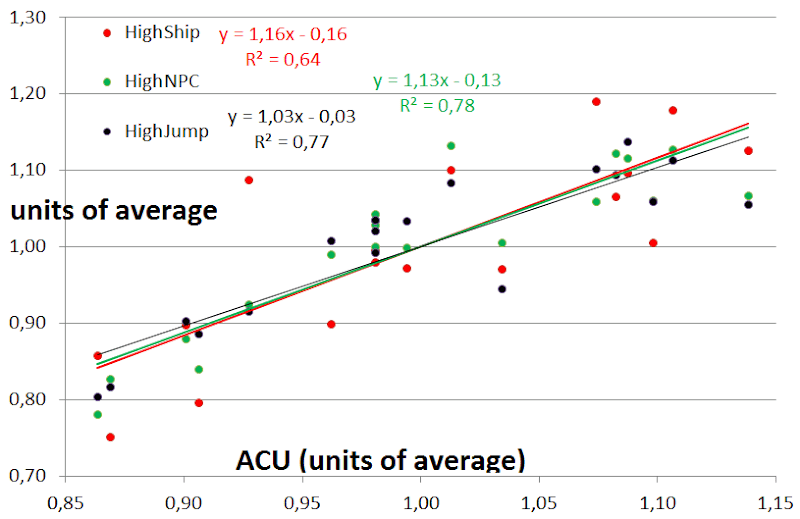 R2 is high for all highsec statistics and their linear coefficient is over 1, meaning if 10% more player logs in, highsec activity increases more than by 10%. Why? Because the core playerbase always log in, the ACU variation affects casual, highsec players. When the ACU drops, the core players are still here, highsec casuals stopped playing. This is both a blessing and a curse for CCP. On the one hand, there is no risk of the game become abandoned. On the other hand, casuals play less hours, so losing 10% of ACU means losing more than 10% of subscriptions.

The lowsec data has stronger correlation with time than ACU. Why? Because lowsec received constant buffs, greatly increasing its weight within the game over time. Nullsec and WH has weak correlation with both ACU and time. To analyze them all, each data set was linearly fitted against both. First against the one that has stronger correlation, then the fitted equation is subtracted from the data, then I fitted the remainder against the second. The first one is bolded in the table: 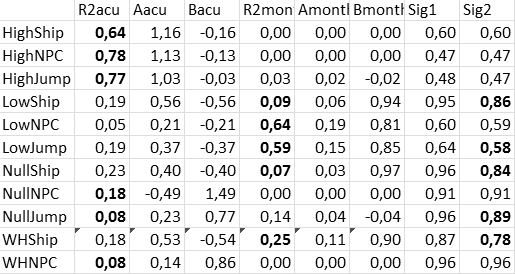 The first column is the R2 of the ACU fit, A and B are the coefficients from the y = A*x+B linear equation. The next 3 columns are the same for the time fit. The last two columns talk about the goodness of the two fits. They are the standard distribution of the reminder after the first and second fit divided by the original standard distribution. If the fit is perfect, it's zero, if useless, it's 1. I bolded the second if it's relevant.

What can we see? For highsec data, the ACU fit is strong and the subsequent time fit does nothing. Highsec activity is only affected by ACU. Lowsec NPC kills are strongly affected by time but barely by ACU: rat hunting jumped when tag rats were introduced. Lowsec movement and PvP are weakly affected by both time and ACU: seems some casuals wander into lowsec, the more they are, the more wanders. The nullsec data is very weakly affected by both time and ACU: nullsec neither got a life-changing patch, nor is affected by the number of players on the server. WH NPC kills detto, but WH player kills are increased by both. My guess: the scanning patch let more newbies find wormholes and when they foolishly enter, they will "participate" in PvP. Summary: if more people log in, there will be more activity in highsec, but not in low, null or WH.

But the gem is yet to come: the nullsec NPC kills have weak negative correlation with ACU and the subsequent time fit does nothing. Let's go back to the first table to see which data set has the highest correlation to it. Then plot the linear fit against it. Weak R2, but the connection is clearly there: 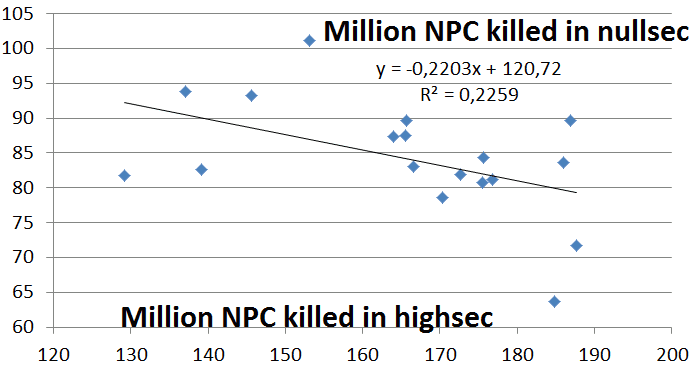 How can more highsec NPC kills cause less nullsec NPC kills? Because the nullsec people often make ISK in highsec, depending on the safety of nullsec and the price of LP.

Now we can see why CCP is in trouble: new players and casuals stay in highsec, so they must improve highsec to increase concurrent logins. But highsec is already so good that it lures nullsec player out to earn ISK! The solution could be adding goals and not activities to highsec.

Goals, can help. just as rewards help (isk) has helped in the past.

Most people are social on some level, once you get that concept you can actually start to look for solutions.

What eve lacks IMO is three things: 1 easy way to initiate interactions (by this I mean someone contacts the new player and opens a dialog with them) 2: A way for the new player to make connections with very little to no effort on their part beyond a simple "hey I wonder" 3: A way to protect the new player long enough to find their feet.

#3 is the easiest, open up a few systems (A: one for pvp no podding, a few others for other stuff) limit skill growth to lvl 3 and no special skills (like the ones that say "can't be trained on a trial account) no real earning (lets be honest here, the hook of "you don't even have to pay for your account with real money" is a bs hook) give every 20 or so players their own personal access (convo) with a customer rep who can answer questions. once they learn the basics and feel comfortable let them be dropped off in high sec with lvl 3 skills a noob ship and a bit of isK

Makes sense.
As a newbie (18mths) I am just about finishing the fitting skills and one set of weapon skills. So far, I have missioned (a lot) mined (boring after a few weeks) and almost every visit to low-sec has resulted in overall losses. Tried faction warfare with an alt for a bit, but most in lowsec and lost *a lot*. Try 100% of the time. Gave up after 4 months or so as it was just an isk sink.
I have limited time and frequent interruptions, so it's a little difficult to play in groups or small gangs - and how to find safe corps? just a huge risk.
I agree - highsec is the most desirable area, precisely because I'm *not* into PVP.
I would suggest more realistic graduation between low/higsec - e.g gradually increasing response times, and possibly more of a sliding scale - at the moment there's a line I don't cross anymore.

Or, as the number of people in nul increases so does the likelihood that a someone comes into your system and you have to dock, resulting in fewer NPC kills.

@Dobablo: nope, look at the first table. NullNPC has a very weak but positive correlation both with jumps and ship kills.