The disappearance of the Hulk

Note: I promised a post about illicit RMT, but I didn't have time writing it, will come on Monday.

Sugar reported from EVE Vegas: “Are they done with mining changes? No. They want to do another pass of the barges. The Procurer and Skiff are not as useful as they want. The Retriever and the Mackinaw are too strong with being good in two out of three areas.” There are three exhumers in EVE, all having a T1 variant too. They are meant to excel in one aspect of mining, Hulk in yield, Mackinaw in self-reliance and Skiff in defense. CCP seem to realize that Mackinaws are overpowered, but they mentioned Skiffs as underpowered. However I often see them, while Hulks have practically disappeared.

To see why, let’s compare the ships in the three areas. They are all fitted for max yield, with no boosts, but max skills. After the data, I displayed the same values as percentage of the best. 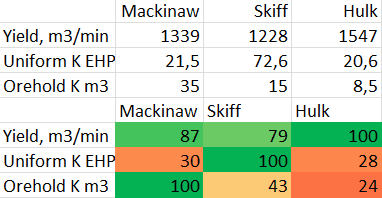 Both the Mackinaw and the Skiff are 2-3x better than the alternatives in their signature ability. If you want a tanked or an AFK capable barge, they are shining out as obvious choice. On the other hand the Hulk is just barely better than the competition in yield. Unless you consider tank and orehold completely irrelevant, choosing a Hulk is simply a mistake. To make it worse, Hulk is the worst in both tank and capacity, while Mackinaw is second best in both of its non-signature abilities and Skiff has a first, a second and a third position.

CCP seen it a problem that flying battlecruisers was equal to flying Drakes. They nerfed the weapon of the Drake while buffing other battlecruisers. I similarly expect them to see it a problem that Exhumer practically means Mackinaw. As first step, I would nerf Mack EHP to be equal to Hulk and yield to be equal to Skiff, while increasing Hulk cargohold to be equal to Skiff. This way each ship would be equal to the other two, except for their signature ability where they shine out. If balance is not reached (measured as ship usage among the players), the strength difference between baseline and signature abilities could be tweaked. I mean if Mackinaws are still dominating the field, their orehold can be slightly decreased. If Hulks are still underrepresented, their yield can be increased (or the baseline nerfed).
at 03:00

Overall I think this is a pretty good idea. The fact that the ratios don't match really isn't too bothering to me (no reason to believe that the utility of each item is linear) , but the hulk being the worst at 2/3 categories does seem like a problem I like your idea of normalizing the stats on non-signature abilities and tweaking from there

Hulks are designed for large group mining, so their ore holds and EHP are irrelevant.

Mining (particularly in hisec) will always skew itself towards a single overriding meta, which in this case means ship hull. The reason for this is glaringly obvious; there is not much difference in the circumstances of mining, regardless of where one does it.

The overwhelming focus for a miner is extracting ore as conveniently as possible - "convenience" can skew to "high yield" or "low interaction", but generally it's a balance between the two. Surviving local rats is obviously relevant as well, but that's achievable in any of the Exhumer hulls at least, and is provided more through good drone skills than through hull choice.

My point isn't that CCP can do nothing to rebalance the exhumers or mining barges - they can adjust the various values for yield, ore hold and EHP. It's that whatever adjustments they make, players are still going to adopt whatever the new most convenient barge is en masse. Maybe that switches from the Mack to the Hulk or to the Skiff, but what you WILL NOT see is a case of all the barges/exhumers getting close to equal amounts of use.

The only way to change that would be to go after the underlying mechanics of mining themselves so as to create different types of mining that match the different use cases for each exhumer. Ironically we were actually closer to that before the Barge rebalance, where the Mackinaw's unique Ice Harvester Yield bonus made it the go-to ship for ice mining, whereas the Hulk was only superior for ore mining.

I'm not necessarily advocating any such change - I don't really have a problem with the Retrievers/Mackinaws being the dominant barges, especially since Covetor/Hulk and Procurer/Skiff do have solid niches for themselves - but if you want to bring about a scenario where all the barges/exhumers see use then that's the only way to go about it.

1436 means you did not change your mining crystals to T2 on hulk but did on other ships. Maths are perfect in theoretical value's.

Implants and fleet boosts are equal to all ships so the % yield comparison remains the same. (incase anyone wonders)

Hulks are used mostly in blue local only enviroments (null) when fleet and haulers are available.
But only if called on by the fleet com.

Skiffs see extra use thanks to the CODE/goblin's munchers and ganking roleplay. Once miners feel safe they revert to macks even in fleets.

People use macks mostly to be AFK as much as possible. ISK/hour Fun/hour is meaningless to them. confronting them with this fact they will deny it and remain strong in their own illusion.

As long as nullsec is empty and highsec ganks are rare macks will win. Up to the point the bay gets nerfed allot (or others boosted) or yield becomes insanely diffirent.

It pays or makes no loss to be AFK.
- Hulk indeed needs a yield boost. This makes him stronger (and null mining more profitable is this desired?
- Skiff could free warp stab maybe interdiciton null? HP in low null and WH mean little cause they'll be caught. Hp only reduces chances you get stealth bombed and alpha.
Stabs add way more defence in these fields. (Could lead to re establishing mining in low sec if you add other changes.)
- Mack tbh is fine make its yield = to mack tank = to hulk indeed is wise. The issue is we have play zones that do not require skiff or hulk. Or useing them would mean little bonus. Reduction of Skiff cost replacement could make suicide ganks more "persuasive" then skiffs will be seen more in high and low.

Low sec repair needs a way to have a "safe" fleet boost and hauling.
Right now you have to have a fleet close to defend you. They will be bored. And no one will come to kill you with a fleet close. No fleet means your dead before you can bring one up.
Very rough ideas here:
- Special cyno with limited use capability to call in defence fleets. (Example big cooldown limited mass and orca use only, orca does not get locked out long time for useing it)
- Blockade runners need upgrade or haulers capable of getting ore out in a safe ish manner. Otherwise people need good logistics to get stuff out of null.
(+2-3 stab, interdiction null good ORE hold not too many lows so it can still be caught by enough webs) Other haulers are either too small in cargo / slow to jump to and from mining OP or just not safe in low at all.
Again maybe a special highsec capable cyno!! Only Orca /rorq can make it. Range limited so cant be from null, mass and ship type limited. Example orca itself can use it so can skiffs and designated low hauler. But to prevent easy escape a ramp up time is needed.

The roles for the three barges are:

If you are mining by yourself, you use the Retriever, so that you waste the least amount of time travelling to and from the station.

If you are mining in a group with orca support, you use the Covetor.

If you are mining somewhere dangerous, then you use the Procurer.

Now, most mining is done solo in safe places, so this is why the Retriever is used the most. But find an Orca and you will find some Covetors (some people might still use Retrievers, but this is because they are afk and it is easy to fill the Covetor's ore hold and miss a cycle). Most miners are risk averse, so probably not mining somewhere dangerous, so the Procurer does not get used much.

So, a boost to the Covetor's yield would probably convince the people afk-mining on group ops to make the switch, but then some would still use Retrievers for the same reason. Nerfing the EHP of Retriever would not affect the decision-making process significantly. Nerfing the yield of the Retriever would have the same effect as boosting the yield for Covetor (best to do a bit of both).

Covetor doesn't need a bigger cargo hold, as all the ore is being dumped into the Orca fleet hangar anyway. The procurer needs the larger cargo hold as it is used for risky deployment and you need the trip to be worth it.

So the Covetor is simple, you boost it's yield and nerf the Retriever yield a little. Then more people will use it on group mining ops. Anyone wanting to maximise isk should be using it already though.

The change I would make to the Procurer is to give it a bonus to Warp Core Stabilizers. That way it can be better at its role of mining in dangerous places. You could go into low sec, mine, and have a good chance to escape tackle.