Breaking news: The battle in Hadji

Hadji system in Genesis lights up on Dotlan because a glorious battle was fought between the forces of light and the evil multibox-farming menace. Brave heroes of Nulli, Snigwaffe and the Sepultura corp warped a smartbombing battleship gang to the middle of the multibox-mining blob of The Wis. The battle report shows 39 badly tanked Mackinaws and their pods destroyed at the cost of 9 battleships and 3 pods. The losses of the dark side are 13-14B ISK at the cost of about 1B.

To make it better, the brave warriors who faced the overwhelming numbers posted their video of the fight. Watch this beautiful gem of small-gang PvP!


While far from being that glorious, I also found a moron who helped me contribute to the good cause with my humble means. Remember Bar0n Greenback who lost his 1B hulk+pod and then camped me for hours with no results?

He was out mining again and he got new implants! 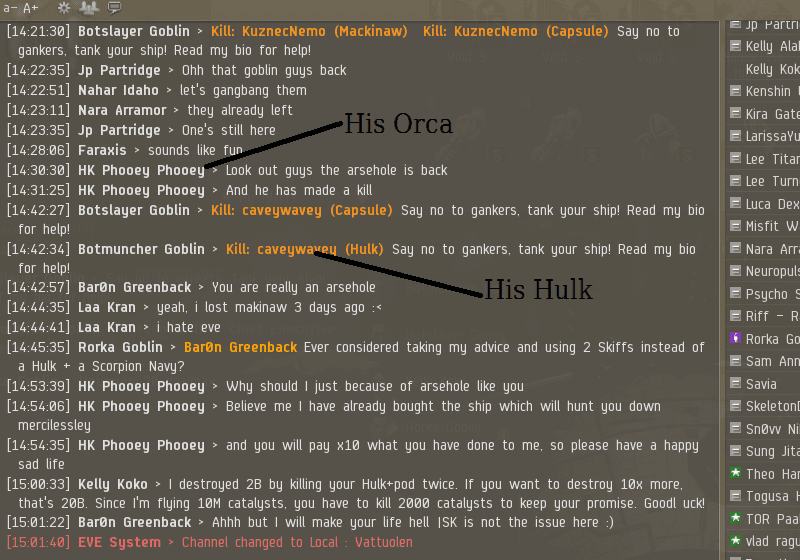 So... when is your ganking corp gonna be posting vids like these? :D

That was fun to watch. Almost looked like the pipebomb video from rooks and kings :) BTW. No amount of tank would save him.

maxim, Gevlon seems to always want to avoid video and audio, not sure why. Even back in WoW, he wanted no part of voice communications.

Please keep going to this system, Kill Baron Greenback whenever possible, post the awesomeness that is his complete and utter ignorance. i am loving the read so far.

The only way Baron greenback is making your life hell is by refusing to get educated.