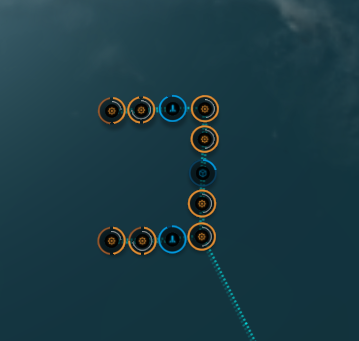 What is this? You surely didn't see it in any PI guide. The reason for that is that it's highly suboptimal in terms of ISK/pilot. I created it for one purpose: lazy ISK for as little effort as possible.

In the middle, you can see a storage facility. The extractor is routed to it and pour aqueous liquids into it. No one serious extracts aqueous liquids, because they are dirt cheap. You can run such facility on any Terran, Storm or Ocean planet. Next to the storage, in the vertical column there are 4 primary processors, processing it to water and filling it back to the storage facility. The storage is there so you don't have to worry about extraction fluctuations. I restart the extractor every second day and replace it if the production goes below 20000/hour. Which is low. But I don't care, moving it more often wouldn't worth the effort.

You can see two launchpads. Both of them are filled with electrolytes I buy. Each feeds two advanced processors, both creating Coolants from the electrolytes and the water. There are two launchpads because I don't want to visit them more often than once a week.

Note: As water sells for 200 ISK, you should run a 16 processors facility if you don't mind the daily hauling. That's about 130M/month/planet, but again, the price is daily hauling. Here you not only don't haul water, but also don't pay for it, increasing the profit/unit, at the cost of having 1/4 as many units created. As a hauling round is about 15 minutes, doing it daily would be +4 hours/month that doesn't worth me +120M.


PS: I just can't resist commenting on this:

This is the GSF alliance update. There are no units on the graph, but it can't be trillions or CFC would field supercarrier fleets and not Caracals. They are billions. The war is for 200 billion ISK/month. Hell, it can be for 200B/week or even day! 20000 pilots fight for it. So the average CFC pilot (not person) will see 10M/month-or-week-or-day spoils. Compare it with the "do eight jumps a week Highsec PI" above with nearly 360M/month/pilot (80/week, 11/day). I mean spending countless of hours grinding structures, running into R&K pipebombs, running from PL supers, being trolled by TEST badposters and paying ransom for your slowcat fleet definitely worth it. Whoever wins this great war will be totally the richest in the galaxy. I envy them so much.
at 07:00

Don't act as if you didn't know it's also about the war itself.

The showing of power and leadership. About not getting complacent and failcascading.

Those people did go to 0.0 to fight after all - not small or medium gang lowsec pvp with bubbles. Nor a 7/14/21 day highsec war with bubbles and large fleets, which people avoid and it's bussiness as usual after.

They fight to conquer and eliminate.
What better target than a valuable region? A mediocre? Or would you just throw those 120B ISK fleets away in a thunderdome to satisfy the line members craving for grandeur? Theres no return in that...
What better opponent than the largest possible threat to their alliance? If they win, TEST will lose way more than the CFC - assets, members, morale. If the CFC wins thats proof that they can take on a vast portion of 0.0 on their own.

But i agree on the chart - worthless without units.

But if you remember, Mittens said it was all about the isk this time.

How often do you have to visit the planet to empty out? If it's infrequent enough I might build this into my weekly/monthly routine.

Sigh... I wish I were in a position to get a slice of all that moon goo goodness...

..Gevlon, with you highsec PI productions and mind numbingly long hours region trading, you are going to be the richest pilot in Eve.

I so envy you. And your shiny isk pixels.

On that note, what is the difference between blinged out purple fit ships and your blinged out wallet?

Both took a lot of time to acquire, and both suffer from diminishing returns.

It is nice to altruistically think that every bit of profit is spread out equally among members, just like in real life corporations, right? because if so, I look forward to my share of profits from my employer this year.

@Anonymous #3 - The difference is liquidity. Unless Gevlon has so much money that he can't blow it all quickly if he was trying his best, the objective diminishing returns on more money are negligible. He may care less about 10mil than a broke pilot, but it's objectively just as valuable to him as his first 10mil was.

Yes, the moon value of fountain is about 200B/month. This is not the only source of income from holding the region though, Fountain has some of the best ratting in the game, so it's a wonderful place to rent out, and it's good for line member's wallets as well as the alliance wallet via taxes. But lets leave it at 200B/month.

As I said before, we held fountain for 2 years essentially unharrassed. That's almost 10 trillion. While the CFC may have 20k members, the vast majority of them aren't fighting. And the money goes to those who fight, either as rewards or via reimbursement. 800 people is a big fleet for Goons, let's say that your average member can only come to 1/5th the fights (which is probably a low number), that means 4000 pilots involved. That comes out to 2.5B per pilot.

Now that may not be anything spectacular, but the point you continually seem to miss when you make this argument is that this is 2.5B for doing what you want to be doing anyway

Your numbers seem a bit off. Electrolytes at 350 ISK? Good luck finding a reliable supply at that price. 450 ISK would be more realistic.

Also, you forgot to take import tax into account.

Now let's talk bsiness. You trade value for value. I give you 100m isk, and you give me 3 million units of Trit. Both of us are happy because I get to use that Trit to manufacture and you are happy because you have 100m to spend on ships or mods or plex, etc.

Now let's talk Gevlon. Gevlon trades value (his time and effort) for isk. Value for value. the person buying Gevlon's value is happy because now he has the product he was looking for. Gevlon is happy because he...has another 100m to add to his hundreds of billions? Awesome.

Now let's talk waste of time. My entity is fighting your entity. My entity wins the overall war. Now I am happy +happy while you are only happy. Why? I and you are both happy because we experienced the incedent of using our awesome spaceships and its awesome fire power. And addionally, I am happy because my entity won the war. What did this cost us? Time. What did it gain us? Enjoyment So our transaction is I pay time, and I receive enjoyment. Value for value.

But at least Gevlon gets to spend countless hours grinding isk he will never use.

Gevlon = knows the price of everyone but the value of nothing.