Moron of the week: he mad

AFK Miners react differently if their 220M untanked Hulk and 150M pod are suicide ganked. Most of them just fill one or more fields of the miner bingo.

But not Ray Rayary. He responded as a true warrior, fighting fire with fire. You might know that I use a Procurer alt to scout targets. So came Ray and attempted to suicide gank it. His choice of ship was maybe not optimal and also he attacked in a belt where Concord was already present, but my 8% lost shields remind me never to mess with Ray again: 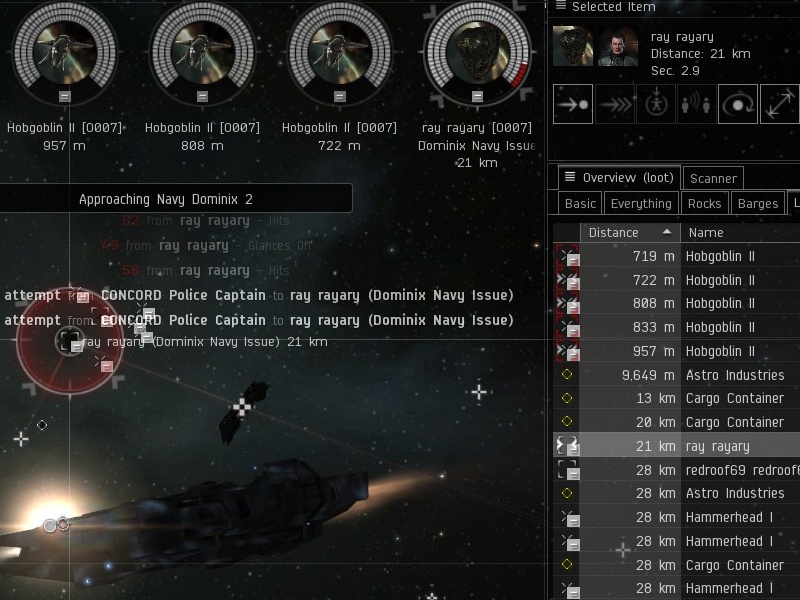 Defeat could not take the fighting spirit of Ray. Neither GCC. He valiantly undocked again:

Looks like he tried to violence you with a PvE Battleship. And had severe tracking issues attacking a cruiser sized object.

Man, even if he'd popped your procurer he lost his domi. The fact that he thought a domi had even a chance of ganking is also sad.

Does anyone actually read wikis on this game?

I think a properly fitted Navy Domi could have done the job.

He would have needed a bunch of Sebos and tracking computers to deal with tracking a smaller vessel, gank modules in low, and a full set of large t2 blasters using void.

A stupidly expensive gank-ship, but it could have been done.