The Scripture of the New Order

At first there was the Miner.

As the Creator wished, he was in a cheerful team. He rode a mining frigate, then barge, then Exhumer eating asteroids after asteroids. He had Orca boost, a dedicated refiner, hauler, trader. He was happy.

But the mining beams found other than veldspar in the eons old asteroids. The Machine was awakened. Some believe it was the same entity that spawned the Rogue Drones. This timeless evil spirit started to whisper to their ears during the long strip miner cycles. It started to corrupt the miners to its own ways. The lone, dumb, endlessly repeating way of the machines. One by one they fell. They stopped mining in gangs despite its efficiency and turned to AFK mining. They countered the lost efficiency with increased time. They started to mine all day. "hey, it's AFK, it's not like I'm a no-lifer for mining 10 hours a day" they told themselves.

The belts became void of human presence, despite the number of barges increased. No one talked, no one hauled, no one boosted, there was nothing but the barges filling their hold, docking up to unload and return. Again and again, in endless repetition. New capsuleers who tried mining were both turned down by its machine-likeness and by the low prices caused by the endless stream of unpiloted barges. Mining got a bad name.

But then - like usually in times of need - a Savior arrived!

James 315, the Savior of Highsec proclaimed The Code to reclaim the belts for humanity from the minions of The Machine. They - like machines do - ignored it and kept on with their endless mine-redock cycles. But then James bumped them out of mining range with his Stabber. He started to write about his adventures and humans with compassion to the miners joined him. They became the Agents. They - as James taught them - bumped the corrupted miners out of range.

When they returned from AFK they found their hold empty. They knew that by failing to complete the cycle, they failed to operate within parameters, therefore they failed The Machine. They then experienced something that machines don't, only humans: rage. In their rage they spilled insults on their saviors. To help Agents properly examine this phenomena, James created the Miner Bingo: 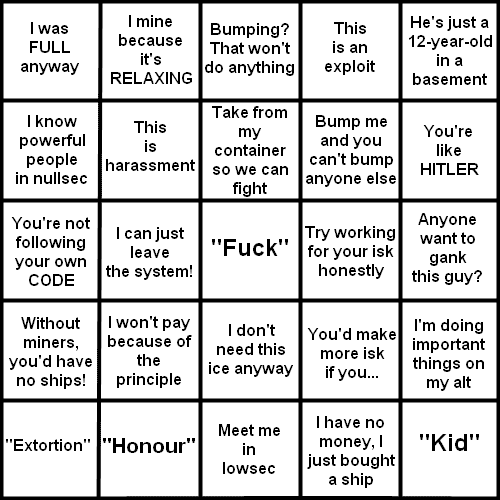 It's important that the New Order has no anger towards these misguided people. We know that their nonsense is only coming from the corruption. The poor souls just reiterate the lies of The Machine, like "the fleet" that will come from some dark corner and gank the agents, or the powerful "lowsec friends" who will take revenge on those who violate the followers of The Machine. They also file countless petitions to the Creator, as The Machine misguided them into believing that they are invincible in Highsec as long as they are away from keyboard.

While lot of miners still suffer from these delusions, some found a way back to their former human selves. These gallant miners pledged their allegiance to the New Order in their Bio and paid the 10M support to the movement. Many of them - still remembering the darkness that held them until recently - became Agents themselves to save their still enslaved brethren. The Agents cleansed whole belts from the mindless zombies that were once our brothers.

But it was early to celebrate. While dozens were saved by the New Order, in others the corruption of The Machine ran deeper. They completed the Dark Ascension and turned into a Bot. The Bot has no humanity left in it at all. It is equal to the rats it shares the belt with. It never rages when bumped. It just reappears the asteroid and continues mining. It is a machine. And like all machines it is mass produced. Look at this, fellow humans and despair at the soulless legion that fell on the asteroid belts:

But even against this army of machines, the mankind of New Eden is not lost. The Knights of the New Order, riding on shiny Catalysts exorcise these abominations with Holy Antimatter: 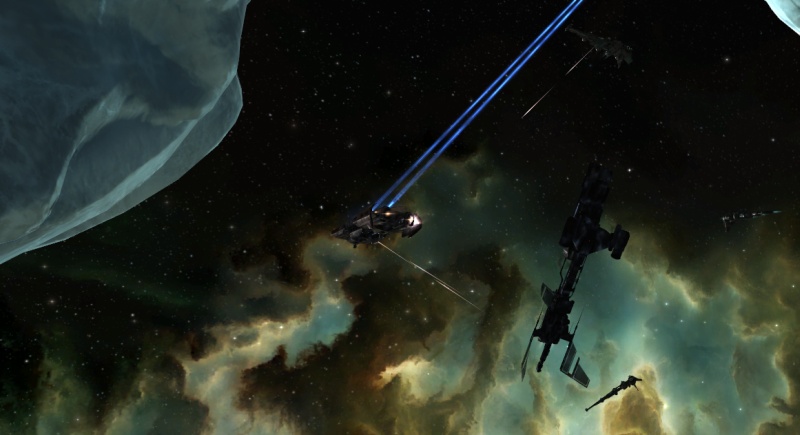 Watch how the Knights strike down the slave army of The Machine! These ... drones - unlike the bumped miners - rarely rage. Do they just walk from the clone station with a blank stare on their face to their next barge and warp to the belt to continue? Or do they wake up, not remembering anything and live as cleansed humans? We can only hope.

The story of the New Order doesn't end here. You can be part of it too, cleansing the belts from this menace. Time is short. In every hour a human being turns into a Bot, losing everything that was good in him. Can you just walk over this tragedy? You can become an Agent or a Knight. The story will end as it began:

"there was the Miner. As the Creator wished, he was in a cheerful team. He rode a mining frigate, then barge, then Exhumer eating asteroids after asteroids. He had Orca boost, a dedicated refiner, hauler, trader. He was happy."
at 07:00

...lots of words. And you still haven't proven that the victims of your ganking are AFK or bots for that matter (they are probably NOT bots given that CCP are actively shutting down botting accounts as an almost regular activity now days)

If this keeps up, Gevlon's comments will have almost as many (unsurprisingly anonymous) tears as James'.

2. Demand tribute for not being ganked - same sum as 'New order' and a similar pledge in the flavor text.

3. Randomly gank those miners who pay tribute to you to demonstrate that no amount of flavor text can 'save' them. Send repeat tribute demands anyway.

Clearly EVE has somehow robbed Gevlon of his sanity. Not for casting his lot in with the New Order - I don't see the attraction, but I'm not going to suggest you have to be mad to work there (though it might help). No, I doubt Gevlons wits because because the former herald of asocial gameplay, the man who was too rationalist for Taggart Transdimensional, now has a blog post consisting of vaguely pseudoreligious RP screed preaching against asocial efficiency in favour of forcing players to interact.

That, or else I have woken up in bizarro world today.

what you should have done: reported that guy to ccp.

@Hivemind: tomorrow you'll wake up in the normal World.

@Anonymous: that guy was reported hundred times. Unless you RMT, CCP can't care less of your botting. He is probably funding an alliance or his own titan.

I do not even play Eve and I find this project ridiculous. What is more, its rationalization sound significantly akin to Luddite rationalizations of 19th century England. War against the machines that took the poor humans' jobs? Huh, I would have never pinned Gevlon as a neo-luddite.

Oh well. I am sure it is something I just 'don't get', as an outsider.

i wonder if i could write a miner bumping bot.

@Andru: you'd be right if EVE was real life. In real life getting items increase your well-being. If you give items to everyone, then everyone will be happier.

In a game the items itself do not increase your well-being. They are only "game points" which have value only relative to other players. If I have more points than you, then I won over you. If you hand out gaming points to everyone, you just inflated the game currency. This is exactly what bots do.

Seems this is mostly "lets play eve for fun article" with more serous undertones to do with eve economics.

Put it like this, every time a bot dies, your veldspur becomes worth a bit more.

I will admit, I do afk mine a bit (typically towards the end of the day, when I'm tired) I would never seriously hold it against someone if they rammed my barge or ganked it.. because this is Eve and everyone is competing, fail to adjust to a changing siteration and you get your arse kicked, if that means you need to orbit that asteroid to avoid trouble, spend a bit more time at the keyboard when agents are about or you know, tank your barge to make it unprofitable to gank, you do it.

It is completely transparent as to what is going on:

James315 has fun RPing a Robin Hood. Not only can he now gank more people who won't be able to fight back than he ever could, these ganks are also sacred, because they supposedly serve a higher purpose. He also has a sizeable army of followers which he can use to further his will, to an extent. What's not to love.

Gevlon is one of these followers, conned by James315 to believe that aiding James315 in his gankings is in his best interests.


@Anonymous: that guy was reported hundred times. Unless you RMT, CCP can't care less of your botting. He is probably funding an alliance or his own titan.

Simply untrue. You report them, CCP investigates. CCP determines not a bot. Just because one has a lot of alts and names his ships accordingly does not mean he is a botter. There is a very famous multiboxer who controls dozens of accounts at once, all characters names are incremented by 1 and he's fine and safe from the ban hammer.

There are people who simply have a lot of accounts. You yourself have 7 if I'm not mistaken? You could easily fund more.

You still have no proof of AFKing (because refusal to respond to conversations or in local does not make one AFK) and you cannot prove botting (only CCP can do that).

And now you assert that if you determine player X is a bot and report them to CCP and CCP don't ban them that CCP only care if you RMT. Your reasoning is flawed.

Actually if I was a miner I would start to consider ramming my own barge into other miners barges.

I prefer Solstice Project to James, at least he goes "I am blowing people up in high sec if they are in pods or APing, just because highsec shouldnt be safe" instead of "I am on a righteous crusade PS, give me isk"

That, and he has a weird face, and makes me laugh

I know this guy! I´m in a corp with his main! He´s using http://isboxer.com/ and is defenitly not a botter!

Spelling error:
In the second picture (the one with James315)
Second paragraph, next to last sentence:
"social compact"
should be
"social contract"

@Pim social compact is an older form of English for the same thing. It is grammatically and spelling wise correct. Think the Mayflower Compact of the pilgrims coming to america part of history. Same concept and use.


not sure what problem this is? multiboxing has nothing to do with ship positioning.

"multiboxing has nothing to do with ship positioning"

in eve each client could have different bookmarks and allow nice seperation while still using the same keybinds.

I gave up on EVE. I might have lasted longer if I attempted to be social. Instead, I just played the 'money making in Hi Sec game'. I'll come back for this project. It's good to see some imagination rather than just idiots arguing with Russians by using Google translate.

i really like your blog Gevlon and come here often. but i cant see why you would go and join this new order. you have your own "art to eve", unique to you and no one else ive seen so far.

im not sure why but i really dont want to see you with them. i feel like your better than that.