One of the cornerstones of EVE is that you are nowhere safe. Not even in "high security" space. Highsec has some safety mechanics, you can't use bubblecamps, the faction NPC police camps every gate and attacks pirates below -5 security status, and if someone attacks a non-red soon undefeatable CONCORD ships will arrive and oneshot him. The above doesn't stop PvP in high sec, just like the graph I found at Sugar shows: 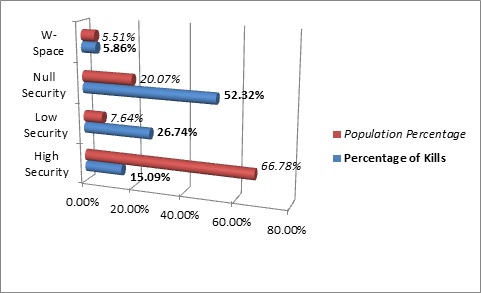 The official statistics says that while your chance to be killed in highsec is the lowest, it's not zero. So you shall always look behind your back, EVE is a nasty, dark, unfair and unsafe place. Bullshit! 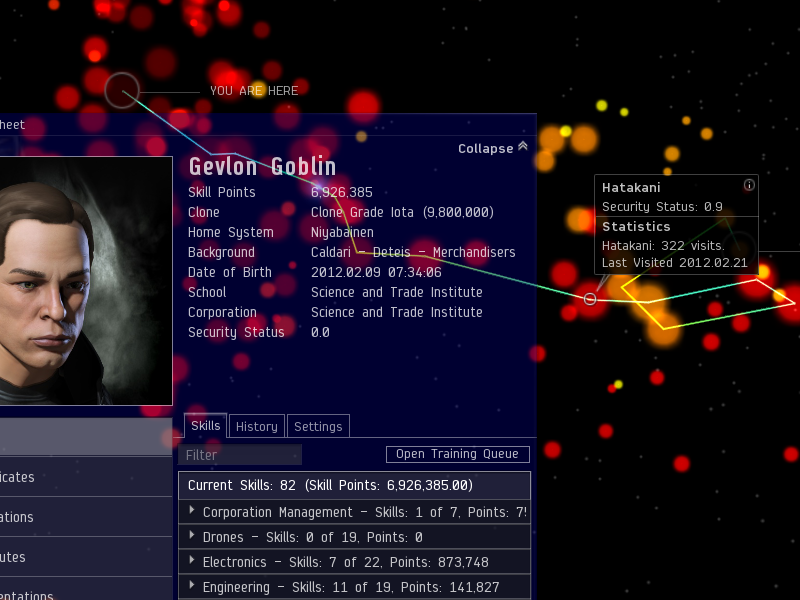 The picture shows the Jita-Dodixie path. Overlaid on it you can see my character sheet, showing that it's not a screenshot from my alt. I traveled this path 322 times. The "last time visited" is clearly bugged, it's probably "first time visited", as my character was 12 days old on that date. The last date was yesterday when I did one last test. However if we divide the 322 by two (as I returned from Dodixie every time I went there) you find a number suspiciously close to my age in the game. The only explanation for it is that - despite I claimed otherwise - until I found a contracted hauler I hauled my wares, first skillbooks then implants on my main, in a frigate size ship. Yes, my main, known from the blog, gathering more hatered than probably any other and known to haul billions was happily and safely hauling for several months. No one bothered to gank me once. Those who read my blog accepted my lie that I have an interceptor alt, those who don't simply ignored my rather unortodox industrial ship.

If you check out the various reddit hate topics, you find a dozen "i go n gank this prick" comments, yet nobody came. The imaginary pirates on Perimiter gate that I crossed more than 1000 times also never bothered to stop me. It would be hard to imagine more lucrative target than me: both widely known and hated and has billions in the hold. Yet I wasn't even targeted once. The danger in highsec is irrelevant if you do your things right.

Who are the 15.09% dead who happen to die in highsec? Extremely careless people. Those who do one of the capital case fails in EVE, equivalent only to walking to Orgrimmar as a lvl1 human paladin: Since stupidity is widespread in EVE, the above three gigafails are common enough to generate all the kills. These kills generate forum tears and overall PR for EVE as "dark, hard, unforgiving place". Yes, just like the electric socket is dark and unforgiving to all who are dumb enough to plug their fingers in it.

If I was not harassed for months flying the same route every day with billions under a widely known name, what are the chances of you losing a ship (without retarded fails)? Similar to car accidents. They happen. We read the news. Yet ordinary people drive their car every day without being scared or considering their activity something uber-hardcore.


Tuesday morning report: 128.9B (2.5B spent on main accounts, 1.9 spent on Logi/Carrier, 1.7 on Ragnarok, 1.1 on Rorqual, 1.4 on Nyx, 1.3+0.5 on Avatar).
My assets decreased and the "2.6B received as gift" disappeared. I gifted that 2.6B away for noble cause. It won't appear on my graphs as I always booked that 2.6 as negative since I did not trade it. Still I had the cash and not anymore. I sent it to Evemonkey with the instructions to forward it to the ship reimbursement fund of his alliance. They are at war with NC. and I want those "mates" to disappear!

Oh there are pirates .. if you fly a noob freightship they will kill you all 500 jumps or so ... so basicly i will count them as like 0.5% loss in my overall statistics ... not that big of a problem .. if you go to 0.0 .. COMPLETE OTHER STORY ... But there it is often only the entrance system wich is camped .. just roll a rifter alt to the local gang .. declare your main as your resupply alt and often you are golden again ;)

I have never gotten in a car accident, and I have driven the same 30 minute commute to work ~235 days a year! For three years! Avoiding a car accident is easy, you simply:

Was this the post with the "mythbusting" facts? What do you actually imagine you have demonstrated with your anecdote? "I haven't been ganked, therefore no smart people should get ganked." And this is also supposed to disprove the "dark and unforgiving EVE?" All you had to do is actively seed misinformation, tank out your mining/trasport ships, and actively navigate your way through hundreds of mind-numbing return trips relying entirely on the whims on strangers A) not being there, and/or B) deciding they aren't bored enough to gank for a potential loss.

EVE has its reputation because it's possible to gank/pirate and tacitly encouraged by the devs and the community. The actual number of times that this happens or the existence of means of minimizing it is irrelevant. Millions of people walk through inner city slums at night perfectly fine.

@Azuriel: and does anyone consider car traffic as a "dark, unforgiving and hardcore" activity?

No, it is widely considered that if you keep the traffic rules, don't drink and use your seatbelts, you'll be fine.

I never questioned the possibility of ganks. I just questioned their probability and importance. The title is "irrelevant" and not "non-existent". You can fly around in highsec with the very same attitude you are driving your car to your work.

Gevlon, you make many good points I agree with. By not being stupid you lower your chances to be ganked in hisec significantly.

However, regarding "Yet I wasn't even targeted once.", I'm not sure if you're aware of the existence of passive targetting systems. They allow you to lock a target without its knowledge.

Still, gankers ignore frigates (hand-piloted, they are nearly impossible to catch) but just because your overview doesn't show a target lock doesn't mean your freighter is not being scanned right now.

Good to see you have finally got over your fear of highsec!

People have this phobia of it,

my experience of it, knowing people playing since beta who have never even been shot at in highsec, despite spending far too many hours a day flying around up there, is that it is not the big scary place you and other assume it to be.

There is this magic phrase which terrifies people, especially haulers "Free for all PvP", or as the saying goes "If you undock, you have agreed to PvP"

I was surprised to see you succumb to the hype, and am pleased you finally figured out what most people know, high sec is about as dangerous as crossing the street...yes, you might get hit by a car/bus/truck, people do every day, but I am thinking you have never postponed a walk to the shops because it involved a road, or taken precautions other than looking both ways.

personally i find highsec the most scary place in eve.
Its full of neutrals and hostiles, people whos intentions i cannot possibly guess.

I've lost a few ships to highsec before i learned to remove ammunition from my guns before entering highsec - you accidentally fire on some hostile/neutral who is approaching you and those concord bastars fire at you.

Also back in the day faction police would quite often scramble and web me, i sometimes hardly made it back to the gate - thank god they have lost that scrambling ability.

Highsec is a very dark and dangerous place for an outlaw like me.

@Gelvon Have you thought about FW at all? The amarr miltia needs people to restock the lowsec systems badly, you could be making a LOT of isk. We're also approaching a T5 cashout within the next few weeks, and many people would be happy to sell you items at lower than market price for the convenience of quickly selling them

I would also point out, that the gankers being there FORCE you to make precautions that you would not otherwise have to do.

In this sense, yes.. EVE is a cruel and unforgiving world, where mistakes are swiftly taken advantage of.

As for the real life examples, those are plain stupid. If anything, driving is a lot more dangerous than high sec would ever be. The idiots who think that driving or walking across the street is safe are usually the idiots who end up causing the accidents in the first place because of their carelessness. If you make a mistake in high sec, you wake up in your clone, or end up having to limp home in a pod. If you make a mistake in real life on the other hand, you can very easily end up in a hospital if you are just slightly unlucky or even in the morgue.

Have some perspective, people.

Hey Gevlin,
I do think EVE is a dark, unforgiving place where mistakes can be punished pretty severe for a MMO, but ofc you gotta make these mistakes in the first place.
A lot less capable and dedicated players than you succeed in EVE.
I don't know much about WoW, is there a lot of stuff like this:

But I anyway never thought EVE was harder to play than WoW, thats just "my dad is better than your dad" "my MMO is harder than your MMO" chest beating.
What did you wanted to prove when you started to play EVE?
That it is not inherit in EVE game machanics to get fu**ed up? Well, of course, would be a rather silly game if it was.
That an experienced gamer will be successful? Well, ok, not a big shocker.
Anyway your ramblings have been entertaining, I'm sorry that you will quit.

My single gank in high sec actually happened even though I had followed all of the rules. You can't underestimate the stupidity of other people, and suicide gankers are no exception. Some guy blew a 40m ship over 60 - 70 million worth of cargo in a Mammoth. He even got unlucky one which stacks of cargo got destroyed and looted around 10m or so if that.

I remember that you once complain that someone tried to shot you down your shuttle. So you have been targeted.