Rated games have about 50% win rate. A bit more when you are underrated and a bit less when overrated, but after you reached your "real" rating, it's 50%. If you played rated BGs, you know it's absolutely not true.

The reason for it is a mixture of bad programming and player behavior. In short: high rated teams are way overrepresented among teams that actually play. This sounds weird, let me explain: everyone has a rated BG matchmaking value. If you never played rated BGs, it's 1500. The average MMV of the players is 1500 by definition. However most of them don't play a lot or don't play at all. On the other hand the few high rated teams play a lot (otherwise wouldn't have rating). Those who tried and failed terribly don't come back. Those who won do. So at any point the teams that are in the queue or in the BG has a much higher than 1500 MMV.

OK, so far, so good so at Saturday 18:00 there are 8 teams are playing, 4 above 1800 MMV, 2 around 1600 and 2 around 1300. Who cares? Here comes the problem with the programming. Blizzard thought that waiting is "not fun", so the longer you are in the queue the larger MMV difference it tolerates. You queue up with your brand new 1500 MMV team and every other teams are playing. These matches are long. You wait and wait, already 8 minutes passed. Then the match of a 2000 and a 2100 MMV team ends and they both queue up. You are waiting the longest, so you get the match, with the 2000 MMV team. If you could wait 5 more minutes the match between an 1500 and an 1600 rated team would end and you could play with the 1500 rated. But you cannot wait, you are thrown against the 2000 rated. The 2100 rated has to wait, and he'll get the 1600 rated when that game ends. You think it's hypothetical? 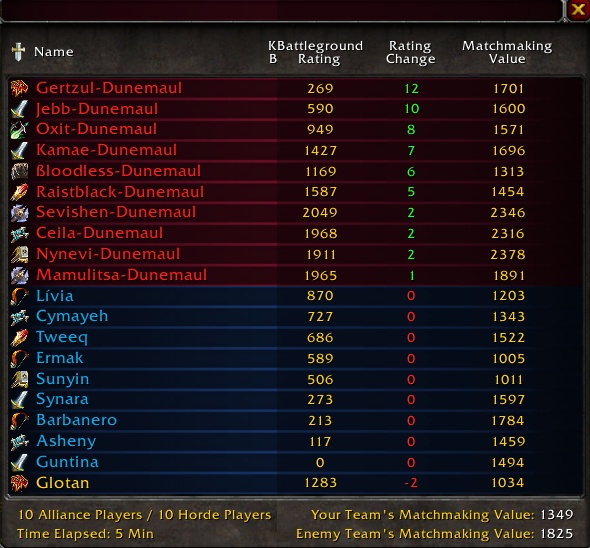 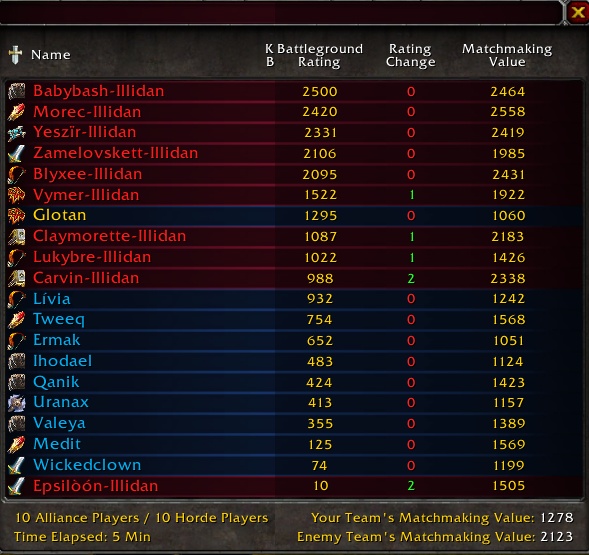 We can't fix that, Blizzard could fix it by maxing the MMV difference to 150 or 200. If there is no team in this range, you don't play, that's it. But PvP is not a priority so don't expect this to be fixed soon. They have better things to do, like recoloring Alar mount 10 different ways to produce 10 "unique and cool" mounts. So we have to deal with the messed up system. Most teams don't, after they get farmed 5 times in a row, they give up and don't come back. How can you prevent that?

When you enter the BG, first thing to check is the matchmaking values on the scoreboard. If it's larger than 250 against you, throw the match instantly and obviously. Don't attack any bases, don't do anything. Let them win as fast as possible. The sooner you are out, the sooner you can queue again. Every time you queue, you have a chance to catch a team that provides a good game.  If your team is above theirs by 250, go for map domination, plan the attack in a way to win as soon as possible.

Why bother with rated BGs at all? At first because to have good PvP-ers, you must have rBGs running. While most of your players are bad, if you wait until you have a good team, you can wait forever. Players run screaming from "we will start X soon" guilds. As long as you have something running, you can lure more players. Our guild is far from being top in rBGs. But since we are doing rBGs, we get players every day.

Secondly, Blizzard made a primitive "fix" to rated BGs at 4.2. You can't get all your conquest points from Arenas. As many players would do anything for shinies, they will do lot of rated BGs. If you have a team, even if it's just barely OK, you will easily farm these "/2 LF3M hilz 4 rbg u need pvp gear and TS" teams. From there you will be the one who win a lot against much lower rated teams. From there it will be easy to recruit PvP-ers and start the road to be really good.
at 07:00

"When you enter the BG, first thing to check is the matchmaking values on the scoreboard. If it's larger than 250 against you, throw the match instantly and obviously." and "From there it will be easy to recruit PvP-ers and start the road to be really good." don't really match in my opinion.

I see what you are trying to say and accomplish, and it is probably the best thing to do in a vacuum with only goblinish motivations. You maximize your conquest points per hour this way, but you also reduce your rating. By not trying and fighting the enemy team, your team will also not gain experience, and see other tactics. You won't learn from losing to better people, because you're not trying to win. Instead you choose not to play.

If you want to be a good pvp guild, with world class ambitions, then you should not throw matches at all, because you're wasting a learning opportunity.

I'm not just maximizing conquest gain but also rating and learning. Against a team with 250 more MMV than you, you have no chance to win. You merely waste your time turtling at the last base or slowing their flag carrier. You could be fighting a winnable battle instead.

Also you learn nothing as they are so above you that you don't even know what happened. You can learn from stronger enemies but not devastatingly stronger.

Secondly, Blizzard made a primitive "fix" to rated BGs at 4.2. You can't get all your conquest points from Arenas. As many players would do anything for shinies, they will do lot of rated BGs.

This is obviously what Blizzard is hoping will occur, but it clearly will not. Rated BGs are a design failure and will continue to be a failure unless and until Blizzard makes losing reward something. Losing in Arena rewards nothing, of course, but the difference between an instant-queue 2 minute match with a buddy of yours and corralling a 10m premade in a 12 minute queue only to get stomped by 2000+ teams all night is beyond ridiculous. An extra 500 Conquest per week is NOT going to be worth it over five 2v2 wins; nevermind the fact that the Conquest gap can be filled by converting Valor --> Conquest after running 2 ZA/ZGs.

2v2 simulates death-match encounters that occur in normal BGs (such as attacking the flag carrier or an AB base), and by all accounts are fun on their own - nobody is playing WoW for the strategy of flag capping or base assaults, as plenty of other games do it better. Rated BGs simulate premade vs premade fights which nearly no one enjoys as the express purpose of BG premades were to farm honor quickly by stomping a less-coordinated opposing team.

If losing a Rated BG still gave you 150 Conquest, it's popularity would surge overnight. If Blizzard has a problem with Trade Chat Fail Squads queuing up and then dropping out immediately for the free Conquest, they could tie the consolation prize to staying zoned in for 10 minutes, or require a match to be complete (3 flags capped or time out, etc).

Also you learn nothing as they are so above you that you don't even know what happened. You can learn from stronger enemies but not devastatingly stronger.

Unless you are extremely bad, it should always be possible to learn something. They have the same set of abilities as you do, and the same options of where to move.

All of those things are stuff you can learn from, even if you cannot possibly beat them.

I agree that you learn nothing after the initial stages of the game - turtling at the last base will teach you nothing. But how they get you into that hopelessly lost position is instructive.

The current MMR is flawed; both for arena and rated battlegrounds. If you are a 2k player/team, and in your 3v3 team you swap out 1 char for a brand new one, then your teams mmr decreases a lot which means you get teams way below your level. However since the system rewards queueing up with a *newbie* you'll get a ton of points. Rinse and repeat ...

And the same *exploit* happens in rated battlegrounds. My point being, if a system can be tricked like this, prioritising the queue can be tricked as well.

This was exactly our experience. We were a little late getting started in RBGs. Our first night in we queued 7 times - 5 of those times we got a team ranked over 2k and got horribly stomped (we won the other 2). We recognized we were being out-tacticed, out-geared and out-played - but didn't learn anything. I suggested throwing matches when the rating dictated, but we soldiered on. The experience was sufficiently discouraging we never went back.

As an aside, is this problem more pronounced for ally teams? (Since the # of horde teams >> ally).

I think Blizzard could fix this by allowing you to set the highest MMV difference. That way a player can chose to wait a bit longer for a more appropriate enemy team. And maybe they could merge a few battlegrounds together so there would be more teams to pick from.

"And maybe they could merge a few battlegrounds together so there would be more teams to pick from."

Battlegroups, you mean? Some got merged in end of WOTLK.

@1627 anon in rbg faction doesnt matter. I play horde and get matched vs horde as well