About a week ago we started using WGClean. I post a screenshot about Archavon's log back then and now a recent one: 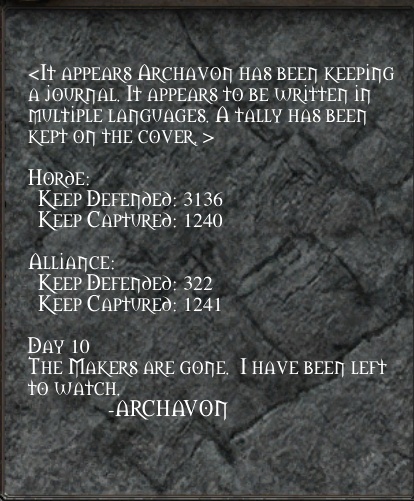 From these we can calculate how many times the alliance won before and after WGClean:
The overall victories increased by 30% over a week. Since we were active in WG before, the increase is not from our better play (like it was in Magtheridon), it is from the addon alone. Please note that the successful defenses quadrupled "magically". I have to note that the kick-list contains only about a dozen names. So it's not like we kicked everyone except pro PvP-ers.

What does it prove? That only a dozen M&S can significantly damage the team's effort. Most people say "yes, some of us are a bit below and not pulling their weight, but it doesn't really matter". Actually it does a lot. A single M&S has devastating effect on the outcome of the team effort.

At first they do it by simply being destructive. A single moron who spawns, run into the horde, die before even dismounted and respawn again can alone promote the whole horde to siege-users in 15 minutes. Since the horde can promote itself on NPCs in 15 mins, the single moron can cut the promotion time to half.

Secondly, the list contains recent M&S and anarchists. There were much-much more M&S on the list who got there, got kicked, gave a tantrum, queued back, got kicked again, got the message and promised to be good. The addon salvaged about 40 M&S in the last week.

Thirdly the existence of the M&S demoralize the minion-class players. "If he can lol in catapult why should I do my job?" - he asks and go useless too. The kicking of the M&S keeps the minions motivated and the not-completely-M&S in the line.


I think I managed to prove that M&S is both destructive, even in small quantities, and also can be countered by iron-fist leadership. However there is another side of the story, that will be introduced tomorrow, explaining why couldn't the iron-fist leadership provided us total WG dominance, why the defense victories quadrupled and assaults decreased and why do I abandon WG?
at 07:00

1 week seems to be a tad short to claim success for WGClean.

I guess I can't dismiss your reason for how it decreased offensive victories while increasing defensive without reading it first, but at the moment it looks more like random fluctuations to me.

"Since we were active in WG before, the increase is not from our better play (like it was in Magtheridon), it is from the addon alone."

What you're not considering is the number of successful WG defences before vs after you joined the server.

Therefore, around 75% of the games would have been played prior to you joining the server. You have already noted the fact that Alliance are amazed that you've won more often than they used to. Therefore, the pre-WGClean server numbers are biased by your presence in the last three months, and is not a reflection of the immediate week prior to WGClean.

Sorry, but you can't make any conclusions from the data you have. Do you have a TimeUntilWintergrasp equivalent on the EU realms?

If it takes 15 minutes to get to sieges rank, and only one kill to be able to get Catapults, then it's faster to use the catapults to kill the south towers (it takes 5 minutes for a solo catapult to take down a tower)

Correlation does not equal causation.

Your sample size is simply too small in comparison to the overall population to declare a victory for the addon.

Are your WG groups completely random? If not (ie you are getting whispers to queue in the same raid for WG), then you may as well throw this data out the window, because it's simply a premade at that point.

This might be work of patch 4.0.1 which brought the balanced queue.

On my server (Darkmoon Faire EU), horde experienced same kind of win% jump, without any addon.

Gevlon, you just re-discovered how an avarage workplace operates. It is teached on every mid level manager course. You point out also that it is a job: "If he can lol in catapult why should I do my job?", so if you want to solve it then go for the philosophy about workplaces (especially the army in this case). Hava a good job in WG :)

@ Deepcut: "Are your WG groups completely random? If not (ie you are getting whispers to queue in the same raid for WG), then you may as well throw this data out the window, because it's simply a premade at that point."

Gevlon's guild presence does that, essentially. But that's partly the point.

The problem with the analysis is that a large portion of the successful Alliance defenses prior to WGClean are likely to have all been in the 21 weeks that Gevlon and his cohorts have been on the server.

@Squishalot: I cannot disprove that claim as I don't know the win-rate of the alliance before our arrival. But also, some old alliance players told that the server wasn't always unbalanced and they remembered much lower tenacity in early WotLK.

I can only tell that I can't remember chain-defends before WGClean. Typically we captured, maybe defended once, but then lost. Now we captured, defended several times and finally lost to the 10-15 tenacity worth horde.

Anyway as we see offensive battle have decreased by 27,8% but on defense you got 198,5% increasement.

It´ll get really interestig after 3-4 weeks, the staistic could easily improve by better tactic or coordination.
If you abandon WG we could get at least a little glimpse to a real comparsion.

@ Gevlon: Fair enough. I'm not saying that the increase isn't due to WGClean, I'm just saying that you don't have the information to be capable of concluding / proving what you're trying to say. Small sample size aside, the data that you have isn't capable of proving your point (that the difference is solely due to WGClean, and not the PuG's presence), and as a result, your post today is highly misleading.

I would recommend changing the post to note that you're getting chain defences that you weren't before (this can be seen by having 12 succesful defence vs 8 Horde successful attack), and removing the percentage wins to reflect the fact that they're misleading. The wordy explanation supports your argument, without claiming incorrect statistics.

Certainly, as an additional note, I'd be sure not to focus too heavily in your next post on the quadrupled successful defense, because of the question mark over the data.

@Deepcut
"Are your WG groups completely random? If not (ie you are getting whispers to queue in the same raid for WG)"

There are not enough people willing to do WG on the server to fill even one raid, so everyone are in one raid by default. What's more interesting, is that number of people joining the fight seem to be strongly correlated with the outcome of previous battle - more successful it was, more people want to join.

The impending expansion and 4.0 patch likely has a massive effect as well. I play horde on another server and we mostly view WG as a free honor mill, but I haven't even popped my head in there for the last two months since I don't need the honor anymore and I've been doing other cataclysm preparations instead. Wouldn't surprise me if alliance is far more motivated than horde now just because they have winning as a novelty to go on.

@ Anonymous - re: focusing on pre-Cataclysm stuff, that's highly likely. I know that I'm prepping alts to 80 and capping off relevant crafting professions to give me more flexibility when we hit 85. I haven't touched Wintergrasp since 4.0.1 came out.

Gevlon, I got a pretty nice Idea for WG, that should work with enough team work. However, you will need people to forsake their Wintergrasp gains for that round. Basically, the idea is creating characters on the Horde side, whom will act as the disruptive morons.

Since, according to your theory, a single M&S can really destroy your faction's play, if you send just 3 or 4 different chars over there, you can guarantee a Alliance victory. Suiciding, lolling around in catapults, and being disruptive morons overall can surely turn the tables massively in the alliance's favor.

Better yet, make that a paid service, so an anarchic Goblin has a good reason to do that "sacrifice", exchanging a honor gain for a monetary gain.

@Soge: that is called win-trading and bannable offense

Something doesn't make sense in the data you showed.

The attacks won were 20 percent before. After the addon it's now at 13? Isn't that a deficit?

Aside from not taking a prior weeks win/loss screen shot (pre-addon), the only comparison you can make is this weeks to next weeks numbers and bring in the comparison of the number of times you/someone with the addon went in as well. If the addon is working, you should be winning even more next week and when the addon is not there, you should see an uptick in wins as well. Obviously you will need to wait 2 weeks to see that result.

At this point people are still getting trained so all results should still be able to increase. If there is no increase or there is a decrease, I think it would be reasonable to say the addon didn't change the WG and it could be chalked up to normal variance.

The problem with your claim is that it doesn't really take into account the late night/morning battles. Due to the Alliance/Horde ratio being dreadful on the server you generally end up losing those battles regardless of how 'trained' the others are simply due to sheer numbers on the horde side.

@coa
the assumption would be made there would be no change in general time periods the addon isn't used.

If an addon user is on a that time and does run WG, they should win more than they did previously in that time period regardless of those playing. And if they win less than in the past, it is the addons fault by Gevlons logic.

So no matter what happens at night, it doesn't affect what i said. There should be a learning process so this weeks wins should be less than next weeks wins if you want to claim the addon is working.

You don't find the assumption clashing with the learning curve theory?

In theory, yes, what you say should be happening but you seem to be ignoring a rather big variable i.e. the number of people that actually turn up for WG. Regardless of how amazing you are when you have 20 tenacity it's very, very unlikely that you'll manage a succesful assult, defence may be a different story.

The addon is in use pretty much whole through the day.

There are so many variables in what gevlon has posted that this whole thing is statistically invalid. players coming back for cata, the 4.01 changes, the equalization of wg for numbers, m&s might have stopped playing till cata etc etc are all huge variables and uncontrolled. But you would expect over the numbers to increase statistically significantly from this week to next as not all m&s that play this coming up week were on last week to learn what they are now expected to do.

also a defense is a win, and you have fewer to organize. But either way the numbers still go up or stay within normal variance if we are ignoring the other variables. In short, the night wg's are the control. They shouldn't change from what they have been historically at worst and you have more wins at best.

All in all... this is a good article. I believe you may be onto something. As several others have pointed out, there is not enough sample. BUT, the gist of your article is... "hey, look what is happening". Please keep us apprised on how the numbers go.