Below you see the our first Wintergrasp report. There is bad and good news in it. The bad is that we don't steamroll WG. The good is the same. The bad part is obvious. What is good in the same? Because it shows that - despite another bunch of naysayers - WG is absolutely not irrelevant. The horde makes huge efforts holding it. They evolved a lot since the initial "they gank at the GY we take it in 6 mins" phase. They defend the keep, they attack the back towers. They try to take GYs. They go for sieges and not players. Of course not all, but many. It is a living, evolving PvP environment.

Our major problem is that the siege engines and the cannons do not get the damage part of tenacity. They also don't scale with gear and skill. So a siege driven by a full relentless geared, skilled player with 15 tenacity does the same damage on the wall as a siege driven by a lvl 78 keyboard turner (unless he is a complete retard who attacks players with it). 3-4 vehicles take significant part of our group, few people remains for PvP. Also the tenacity does not make us capture objectives faster. It happened that we defended a workshop, and we lost it despite we did not lose a single player and killed them in large numbers. They were simply larger in numbers.

However all these things will disappear with the next patch that places a cap on WG. The horde can't send 80 people against the 20 of us. From there, we will be much more successful. Until then we are still not lost. We have victories, we just have to improve our strategy every time. For example the picture below shows how can you break the keep door without breaking the walls. The horde was happily PvPing somewhere, believing we are nowhere near victory: 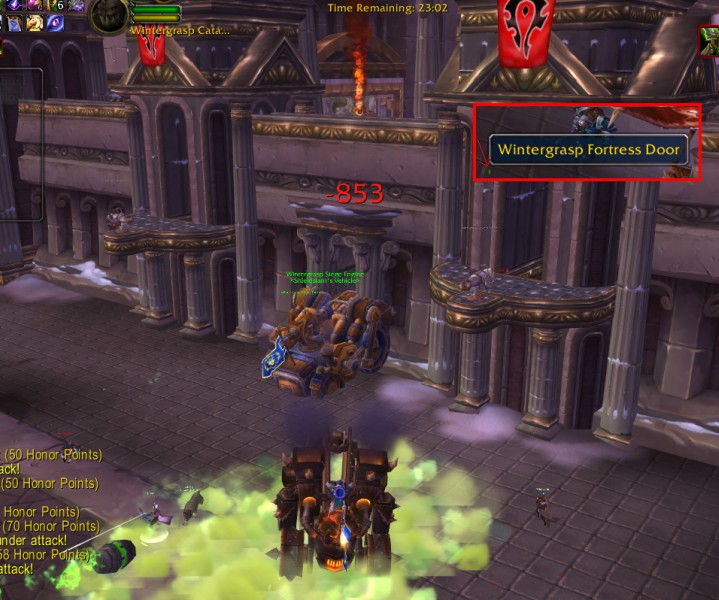 So if you are up to PvP, join us. We have 95 active members (inactives kicked), many joining every day, about 10-15 online in prime time and around. Most of them are lowbies though, that's why we can't own WG yet. But they are active and grow.

"It happened that we defended a workshop, and we lost it despite we did not lose a single player and killed them in large numbers. They were simply larger in numbers."


Prime naysayer reporting in. This is exactly what I said it would happen.

However, I also share your enthusiasm about the next patch. It will improve your chances tremendously.

I'm telling ya. Allies are getting really pissed about this whole thing.
I made a level 1 after you won and people in /2 were raging at each other for half an hour. I even kept some pics for fun.
So, for the naysayers, it does hurt them.

Do you know what the next patch will do regarding the tenacity buff? If both sides have 25 players in WG it should eliminate that I would think. If that is the case then those cannons on the seiges might end up being useful.

"A classic alternative strategy to capture WG:
http://www.youtube.com/watch?v=Wm03136FTI4"
1) Not enough materials
2) Not enough engineers
3) Not enough force to stop the alliance (maybe, though)
Could work once or twice, but not as a bread-and-butter strategy

P.S. Correct me if I am wrong, but I consider every number without a source a straight trolling.

"brake the keep door without braking"


BTW your second-latest has seriously swayed me towards getting a European account. PVP with disciplined players AND I get to see ICC? Hells yeah. I'll have to see what the trial account is like.

With the population cap in WG, that will increase success, but at the cost of a greatly reduced challenge. Do you feel that Blizzard is watering down your project, indirectly?

I think his project should be fine, because now it will be holding it consistently, something that is very hard to do due to the internal balancing system. So the wg side of the project will be about always holding WG.

I was actually expecting more success, even at this early stage. Sure it's an increase from before, but not by much it would seem. Moreover, given the way that WG is balanced, I would not call it at all successful until you can DEFEND wintergrap. It is meant to give attackers a very large advantage, so defense should really be the measure you're aiming to increase.

Would you mind posting a SS of the wintergrasp win-loss logbook (can be found inside the relic room on the floor).

I found a good realm for US.
Cho'Gall-US has barely no alliance in it and the Horde always has WG. Can you say something so that people know?

Vehicle health and damage output in Strand of the Ancients and Wintergrasp now scale with the item level of the operator's gear. Power scaling is now 1% damage and 1% health per average item level.

Bombing the gate doesn't work anymore, it was quickly hotfixed right after Goon Squad did it.

Re: 62 second wintergrasp. Even if they had 40 engineers, wasn't there a change to make that not a viable strategy anymore (reduced siege damage)?

@ Alrenous: I tried a EU trial account from my US location and latency was 450-600 (yellow to red) in the gnome/dwarf starting area and ironforge, and I was only player on both locations. So not sure that buying a EU account will help those US players interested in participating.

As someone else noted, Cho'gall server was mentioned as a US option when gevlon started this and as I recall, a player named greenhell was going to try to get something going. not sure of status.

My latency is below 300 pretty reliably, apparently. My main issue is that levelling is boring the second time around.

A bit on topic: I am curious for an update on rumored US gank projects similar to what Gev has on EU Mag. Rumor was something was going to start on Cho'gall, but I found no toon there named 'Greenhell'. Anyone know? I suppose I'll ask on the server, but I'm placing this post here as an effort to drum up US-side activity of this variety. Thanks.

As a further challenge for this project, an attempt at completing "For the Alliance" could prove to be exciting and would require some careful planning due to the population imbalance issues. Obviously doing it at a time such a 3am would defeat the purpose of it though.