Mean guys of the week

Epic mean by Victor. In this thread, our specimen (unenchanted hunter) whines that everyone on his server is mean, as they refuse to take him to raid. And a blue poster is being mean with him.


Brad was mean with this specimen. He is not ungemmed, not unenchanted. But he did not know that any enchant or gem does not work for a hunter (like MP5, resil, spirit). Nor 1K DPS. But hey, he has friends who leave with him (luckily they are too stupid to figure out they could kick Brad). 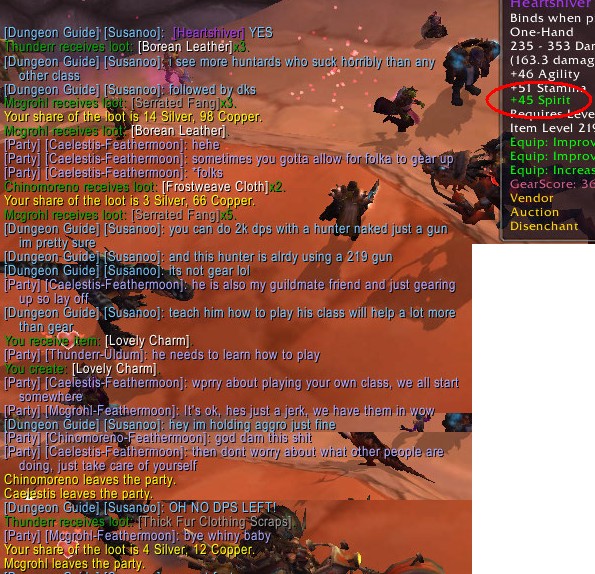 Kalisandra naively believed that the one borderline and two useless DPS selected UK because they know they have much to learn. Of course not. The useless fury even tried to tank the instance after the tank left them: 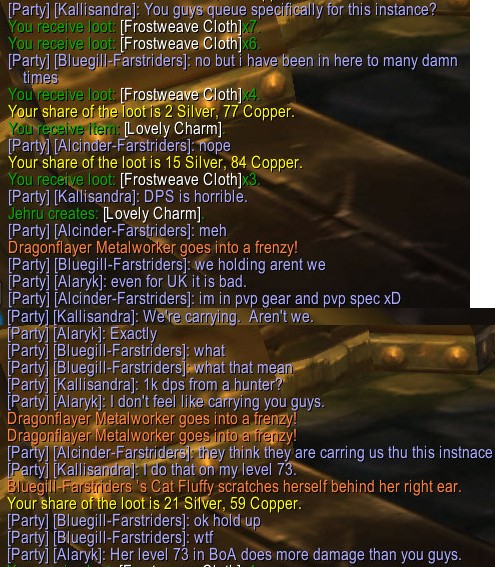 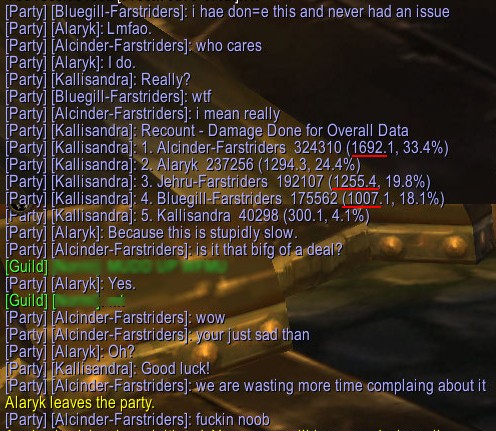 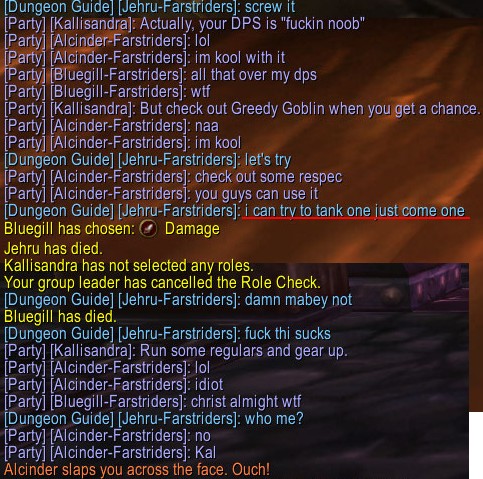 The US forums badly need more blues like that.


Ghostcrawler tries, but he's too polite about it sometimes.

these mean guys of the week is why i don't play WoW anymore. i can't stand people who goes "don't tell me how to play" when i question their decision of not having any gems in their 7 gem slots.

Perhapes that was a bad run! Then again instead of u representing what our name mean,and understanding what we are all there for u bash out on them, and make it public joke. (well try to anyway) Sad thing is, nah to hell with it. I will inform u of who Iam the name is bluegill and what is posted about me do not and will not deture me from continueing to play. If anyone wants to judge me from this form that is your god given right. This person and maymore can continue to bash out and make peeps feel weak, However you shall not , nor can not deture me from what i like to do with my free time.

However you shall not , nor can not deture me from what i like to do with my free time.

This is where it goes wrong. What you do with your time is your call.
Nobody will complain if you're on your own and you do very low dps. Nobody else suffers the consequenses except for yourself. I can imagine myself that you don't care about it as long as you manage to get along.

In a group however, four other people suffer the consequenses of your slacking. In a group it's not only your own time. You're wasting the time of four other people. While it's not needed. It's not very hard to improve yourself to the point where you are carrying your own weight.

I think the point is what is described as the Dunning-Kruger effect.
It's simple.
Two types of people:
Type 1: Can't see their own incompetence. This is the group causing all the problems. This group simply doesn't see they are wrong. They don't realize they are doing something stupid, and therefore they will blame anything that goes wrong, on someone else.

Just anyone else, as long as it's not them. It's the healers fault if they die in fire, it's the tanks fault if they keep getting aggro because they're attacking the wrong mobs. They just don't see their own mistakes. And because of that they won't improve.

If they get told they should improve, they get offended, because they don't see that they are doing something wrong. And who wouldn't get pissed when being yelled at while doing nothing wrong?

Type 2: Is critical about himself. Is able to see it's own mistakes and therefore can improve. It is very likely that they improve, as a matter of fact, because they see that they make mistakes witch is the first step to improving. Because they are so critical about themselves, they will try to not make the same mistakes again.

Type 1 is the kind of guy you don't want in your group, or guild.

The best is still when the healer sucks and then blames the dps for not killing shit fast enough.

If someone is doing low dps but is trying their best, you can't fault them. But if they're geared wrong and have no idea how to play their class, then they are mock-worthy.

One of the problems with LFD is that it can pair those of us who spend a significant amount of time and brainpower to understanding the game and how to play it best, and those who simply do not.

The hunter doing 1K DPS could probably raise it to 1.5K simply by understanding hit rating and getting to cap. But he chooses not to. So what?

Many WoW players do not have the attention span or IQ to understand the intracacies of this game, and there are many.

I kind of feel like you have to cut them some slack since it was Blizzard that made it so easy for the two groups to get together.

Consider that with the LFD system you can likely run at least 2-3x more instances in the same amount of time as before. And for that you have to occasionally (very rare in my experience) put up with poor, and even asshat players.

Deal with it. Get a bad group? Leave, go have a snack. Requeue.

I get more irritated by the gogogogogo studs.

I have a question. I ran into a situation that sort of bothered me. However I am not sure if I was in the wrong or not.

On my level 27 Paladin I queue as Tank/DPS. So the RNG chose DPS for me. I get into the instance with my shield on. Immediately I am asked "Why you haz shield N00b?". So I told them I am tank specced but queue as either tank or DPS.

I then get accused of "ruining" their run. I am Satan and the Debil. So we start the run and after the first boss I pull up recount and I am doing 2x the DPS of the next person.

So am I a jerk for keeping my shield on? Should I pay a grand to dual spec now into Retribution for the times I am picked as DPS? Or am I fine since I am beating all the suck DPS I play with anyways? What is your opinion great and knowledgeable goblin.

For some amusement - The hunter, McGrohl in the first mean has either deleted his character or name changed after appearing here in this post.

As far as the last mean, the one thing that strikes me the most is the fact that there is NO ONE in that group performing well enough to call anyone else out.

Every single person in that group is doing horrible. Even tanks should be able to do more damage than that. Talents and class balance has changed significantly with an overall trend upwards in power since the launch of wrath and it is perfectly possible for ANY class to be doing greater than 2k DPS the minute they hit 80.

Using the random dungeon tool in WoW and expecting to be paired with people who know how to play is plainly dumb.
I wonder how many random dungeons they get to run per day the "mean guys", as there's like one dps every tenth dungeon or so that knows how to play. Must take forever to get paired with a group that fits their high standards, and when they are finally satisified, the instance is over within 6 minutes.

By the way, anyone else love fucking with these "superior" players? They say "fast run plz", you say "brb 10 min". Ahh, that's what keeps the game worth playing...