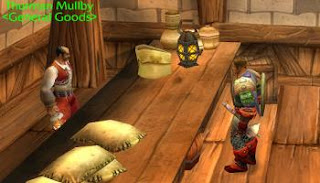 In the realm of Azeroth, there are strange people called vendors. They buy and sell on fixed prices. Some of their items are unlimited, others are limited. They have also unlimited money to buy my stuff and willing to buy everything for their fixed prices. Their strange behavior allows a good businessmen some extra profit.
One of these opportunities is "vendortrashing". Dumb people sell stuff in AH for lower prices than the vendor's. Usually these are just low bid prices, other times they are just desperate to sell their stuff and don't even think of the vendors. You can bid/buyout these items and sell them to vendors. Don't expect great profit though, but you can expect sure profit! If you have the time and buy 80 pieces of greens for 2G and sell them to the vendor for 2.3G, you got yourself 24G. Free of risk, free of waiting (except if you bid, because than you have to wait until biding period is over or someone overbids you). Tere is an item that got famous for vendortrashing purposes: Heavy netherweave Bandage (and it's ingredient Netherweave Cloth).
What are the effects of vendortrashing on others?
The other opportunity is selling vendor-sold items on AH. This sounds silly. Why would anyone pay 1G for Herb Pouch if any herbalism supplier sells it in unlimited supply for 9s? Mostly because he is dumb. But it's still not my place to ask but to serve the paying costumer's requests. If one is ready to pay for this stuff, I'm here to supply. So this part is a typical "feast on the fool" business, making only me happy, having no effect on others (the effect on the dumb is irrelevant, since he would waste his money one way or another).
Some vendor-reselling actions are not based on fools. This is the case with the remote vendors. In order to buy their items, you have to travel halfway around the world. Here my work is that I make the trip and it's right to ask money for this work. When I was leveling my main, I made 6K before reaching lvl 70 with a simple business: purchased first aid books from the vendor in quantities of 100 and sold it in the AH with 1-2G profit (until competition did not ruined this business).

So if you see a vendor, check his wares. If the Auctioneer tooltip says, that his stuff sells for much higher than he ask for it, buy a dozen and sell 1 by 1. The buyers don't have to travel (happy), you get rich (happy). The only loser on this business is the dumb vendor who thought the best spot for selling stuff would be in the middle of the forest full of beasts instead of a marketplace in a city. There are also occasional vendors who are available only at limited time, like the ones in Darkmoon Faire or in Halaa when belong to your faction.
The last vendor-based action aims on limited stock items. The vendor can only sell a limited quantity. If you pass by, check him! If he has the item, buy it and sell it on AH. The buyer pays for the service of not only bringing the item to the AH but also to save him from disappointment of going to the vendor and see he is out of it. This is a great source of money, since the vendors usually sell low and the item is limited, so the sell prices can be really high. My other leveling business was buying limited stack enchanting recipes in Moonglade and selling it in the AH. Later I had an even more profitable business. I slept as a bird on a tree next to Halaa. When Halaa was horde-controlled, I bought 3 swords and 3 throwing weapons from the vendor, and disenchanted it. They cost 29G and usually provided 7 greater planar essence, and 5 arcane dust. They sold for 70-110G back then. It is 40-80G profit for 2 mins work and could e repeated 5-6 times a day. In this case the buyers get item he would not get otherways (happy), you get profit. The loser is the vendor again, who underprices his limited item and don't try to keep more on stock. I mean if no one visites him for days, he still has only 1. Why don't he order more?

The last usage of vendors is buying faction specific items, typically pets and sell it in the common AH of Booty bay or Everlook. Since the other faction has no other option buying the item, you can make really high profit if you have no competitor. Since you transport over an otherwise impassable barrier, everyone involved are happy.
at 07:00

There are limited amount of business information in WoW, so I either post nothing but philosophies or I post updated old posts now-and-then. Tomorrow original philosophy.

- I've been using this method for awhile but apparantly in the next patch they will almost remove any vendor market because trainers will be able to teach you everything (you don't have to buy the profession books anymore etc...)

- In my case I've been doing business with Alliance only recipe's sold by
http://www.wowhead.com/?npc=340
but apparantly (cooking recipe's) can currently on the PTR's these can be learned from trainers, I haven't checked it out myself yet.

- As far as the pet market goes on my realm they go for only 5-10g each because of huge undercutting so I don't spend time in that.

- The Darkmoon Faire vendor always seems a good deal, I usually put an alt there and check the vendor every 30 minutes for cheap WoTlk herbs.

:] The green/red text make me happy for some reason.

The green text burns my eyes.

It's all good Gevlon, it's actually a really great idea to post an old topic because how else would your new readers know to read it otherwise? On JMTC I'm constantly trying to link back to old posts or revisit them in order to help newer readers.

Keep up the good work,