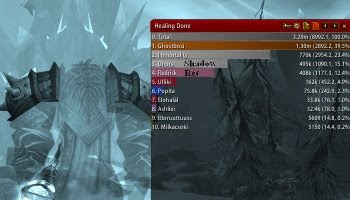 Well, life made sure you don't end up without Feb 29 post.

I set up my first Malygos PuG, faced some old and new problems.

The old ones are the usual, DC, AFK, guys with 900SP want to get in, I simply kick them.

People all saying they know the fight, yet most DPS had no idea what sparks are for. People stand into the face of the dragon. Is it the first dragon they see?

This is annoying, but can be handled by simply watching them, warning them once and kick for the second. However healing Malygos and watching over all the DPS is not an easy issue, but still can be done, after all the regrowth cast is 2 secs and this time can be used to spin the camera like a crazy 80'es disco DJ to determine who stands away from the dead spark.

Some extra spice comes from the fact that I'm leading a raid to a content I never did. So I have no experience about the various ways how "intelligent" people can mess things up. For example I could never imagine that a DPS would not go to the spark. The spark gives 50% bonus damage. These guys love bonus damage! Than why on earth they ignore the spark??? I made a dozen new "/rw Do this do that" macros.

However I faced a new kind of problem here: pro player in PuG. Pros don't care about Naxx PuG, but happily joining Malygos10. He did the fight, he is in a topguild that either benched him this week or needed his alt or whatever. Since he did it, may even did the achievement, he thinks he shall also lead it. Too bad that they have no leading experience and are not used to ... khm ... average ... khm ... players. They expect the run to be complete in a single try and get angry when it's not. But due to lack of leadership experience, they have no idea how to find who messed up, so they address their comments to everyone. Which obviously generate further comments.

For example people die in P1. What does pro player says: "ffs noobs how did 3 died". There are two problems with this line.
So the correct sentence is: "X, you got hit by arcane breath, which means you were front of the boss. You are not a tank, so you shall never be front of the boss. Do it again and be kicked!"

However to give this response, I have to dig deep to recount, check every deaths. It takes time. In this time, Mr Pro set the flames of drama high. You surely see the problem: while I could kick Mr Pro for making drama, I would lose one of the best players and he and the other pros would not even understand what did he wrong. After all, he just stated something true (some noob did something stupid). I cannot blame them for not having leadership skills nor for being upset because of the wipe caused by some noob.

Other problem: they tend to leave after a few wipe with "this group will not kill him". I talked to two of them. They were honestly surprised when I told them "there is no group, it's a PuG, we can kick the underperformers". They are so used to fixed guilds that they can't even imagine that it's not them who shall leave the group but the weak one. I don't know how to counter this problem except tell all of them in /w after they left.

PS: while it was a failure as attempt and was far from successful management-wise, it was fun for me as player. Although there were just 2 healers, and the priest was not the best, the tank always survived P1, and only those died in P2 who couldn't run under the sphere (always the same guys). So as a player I was more than happy. Much happier than I would for grinding the same old bosses in Naxx.
at 07:00

There are different ways of slacking. Those "pro" players were slackers in leadership. Giving feedback that is relevant, precise and actually can leed to an improvement is an art and it takes knowledge and effort to perform it. Those "pros" didn't have a clue. In one aspect they were M&S, since their behavour didn't contribute to the success of your task.

Leading non-pro people in a manner that they can step up and perform better than expected is indeed a task of epic proportions. I hope you'll succeed in your mission soon. Anway: good to hear that you at least enjoyed the evening somehow.

What I hate on Malygos is when we have multiple DKs and they don't even *attempt* to stack the sparks.

You only give people two tries to execute something perfectly and kick on the second try?

I consider myself a fairly decent player but I go wtfpwnd learning to do Malygos at least 10 times (maybe more) before we executed it.

Also, have you done all of the achievements in Naxx? Arguably a way to make less challenging content extremely challenging.

@Ana: I give two tries to avoid the SAME mistake twice. He can do different mistakes.

Gevlon, love your blog man. I tend to think similarly to you in regards to raids/pugs.

While yelling at people for being noobs probably doesn't help the situation, as you said, what the "pro" said was a true statement. Especially when it seems like some of the "noobs" had told you that they'd been to Malygos before. Seems like an insta-kick to me, and you'd be more than justified doing so.

@ Ana - Honestly, Gevlon's being pretty generous here. It still kills me that people wipe on Malygos. Look, no fight in this game is hard... NONE. Yes, some people just aren't good "gamers", or don't pay attention enough, etc. But seriously, how hard is:

The ENTIRE fight in 3 sentances. 2 phases are just about where to stand. Stand in those places and win! People who can't follow those simple directions either A, are too stupid to listen, or B, don't care. Either way, here comes the kick!

forstly - those comments were not th pro comments, becasue while a pro might not be a leader they are familiar enough with the fight to know what the common mistakes may be. having done the fight doesn't make you a pro, as long as you are not going for Malygos achievements (maly in 6 minutes, or poke in the eye) you can actualy be carried through it (the fight can be done sucessfuly by a group of 8, so there's 2 spots left for people to completely screw up. Even if you lay dead on a ground the entire fight - you still get Malygos kill counted.

Although as someone who might join Malygos pug on an alt, I can tell you that I would most likely leave after 3 wipes. not becasue I don't think the group cannot do it. becasue I have no motivation to spend far too much of my time and gold wiping with a bunch of strangers, while they learn how to do the fight. I've already been there with my guild - now I'd rather do something more fun for me.

Pro's DO understand that learning takes time. they just for the most part (with the exception of someone like BBB) don't wish to go through the learning phase all over again. kinda like you dislike grinding bosses in Naxx etc.

also - certain aspects of that fight take practice. stacking sparks for instance. moving the dragon so that dps CAN actualy stand in sparks and dps. For example, I play a hunter and I have range limitations. Malygos has a huge hitbox, so if the spark is too close to him, I have to stand outside it, becasue even with the spark boost, I do less damage melee then I do ranged then there's a matter of spark being killed directly behind him so that to stand on it means risking a tailswipe.

moving around to get into the sparks also takes practice and a great deal of communication (they don't all come from the same direction, so your next spark maybe coming from the oposite side of the dragon of from the front - it requiers a great deal of teamwork as well as some exprience with the fight to move around well)

and then there's a matter of phase 3. unless you are naturaly amazing vehicle user and/or been practicing on Aces high daily quest - you will need time to learn how to fly in a tight pack and stack, how to time your stacks and at the same time have enough energy left for a shield in case he targets you.

you will probably suceed in your task eventualy. when it comes to this tier of raiding. it will take a lot of wipes and a lot of people shuffling untill you manage to organize a pug that will down him.

this may be your idea of fun, me - I'm far to casual a player to spend that much time or effort on something like that.

Your Mr. Pro sounds like Mr. Moron to me. That's just the type that we g-kick--know it all whiners who criticize people when it's not their job. Critiques are the burden of the leadership.

To be quite frank, it's the job of your average raider to maximize his own performance and listen to instructions. He can give his opinion if he's asked, or in a whisper to the raid leader!

Still, when I pug, I tend to end up leading or co-leading with my pocket tank. Even if I'm on a different character for me, I know the typical things that go wrong and I can inform people about those. However, I don't pug a whole lot! But I might once I get my gold in a good enough shape to start buying crafted purples for my alts. I don't have incentive to PuG on my main, though I have done it for 10-mans a time or two, just to get badges to kit out my alts in the Bind to Account Gear.

Honestly, leading a group means you shouldn't be the one learning the content. Not unless you're in a guild that is, as a group, learning the encounter on a progression night. If you're going to try to pug something, the least you can do is ensure that you know the fight already. Anything less puts you into the group of "M&S"s you're always complaining about.

Good players come to expect a certain quality of play from those around them. Part of that is leadership.

just to help you out

A real pro knows how to figure out who messed up and whatnot. Your pug pros are simply geared idiots with high ego who got boosted by their guild, which is precisely why they get to be benched.

Still, kudos for making to phase 3. That's a lot more progress than I've seen with any complete pug.

Usually I only see phase 3 fails on my healer alt when I'm asked to heal a guild attempt. With pugs, it's mostly sparks fail.

Damn insightful stuff man. I love these posts as much as the market speculation ones.

Well put. Made me laugh.

The addon FailBot tells you in the chat who made mistakes in bossfights. It might make it easier to determine the players who keep failing.