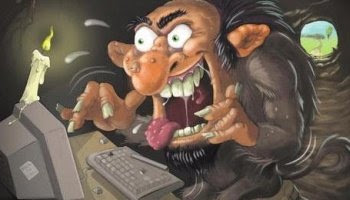 I've got a troll comment for one of my posts. However just because someone comments as "Anonymus", cannot distinguish between "lose" and "loose", believes 0.59:1 = 1:3 and his main point is that the post author is "idiotic, desperate, or, in your case I'm sure, totally OBLIVIOUS", it doesn't mean that every point of his are wrong.

I would strongly discourage anyone ignoring such annoying beings. They usually have some point, otherwise they would not be trolls but one of the mindless legion of sheep. These sorry creatures are in the sad position of being a bit smarter than the sheep. They are not so dumb to be unaware of the problems but not smart enough to be able to solve any. So they bitterly curse anyone and everyone. However this behavior does not invalidate the problem they notice. The trolls are just like radicals in real world politics: their problems identification is usually correct, and it cannot be ignored just because their solution plan is usually "me strong, me smash it with big club".

Our troll's point was that my findings are invalid because I live and act on a low population side. WowJutsu knows of 11.5K high level players on my server, with lower levels it can be 13K, leaving 4.8K players on horde side. This rises two question remains: how does faction size and faction progress affects moneymaking.

The second is problematic: one can assume that everyone with brains transfer away from a server without a decent PvE progress guild, leaving only ignorant newbies and idiots behind. These creatures can be easily reaped by any tricks, creating the wrongful assumption that the tricks are actually great. However my server is a PvE server, so the numbers of the opposing faction is irrelevant. We have progressing guilds with the topguild downed Malygos HC and Sartharion with 2 dragons, so its not an abandoned ghetto of idiots. BTW there are always queues on my server at the evenings so I have no idea how can this server be of low population.

What happens with the "tricks" if there are other businessmen on that scene? The crystallized/eternal fire business requires de facto monopoly. If anyone else starts buying eternal fire to relist as crystallized and undercuts me, every dumb buys from him, forcing me to undercut him. Of course he will undercut me again. This goes until the profit goes so down that one of us says it's no longer worth it and leaves. This finally happened with me, I abandoned this market.

So the profit ratios are lower on a higher population server since I must keep them below the interest point of the competitors. However, due to the higher number of dumbs, the quantities traded are larger. So on a 3x bigger server I could sell 150 crystallized fire for 1G profit instead of 50 for 3G profit.

The higher businessmen number also means higher specialization. I'm free to peek into any business from simple arbitrage to payed blacksmith workers and come out with profit. On a higher population servers several fields would be taken, I'd have to find my own small field or take one from someone by force. However now I can make limited profit from each of my fields, due to the small amount of possible buyers. On a large population server I could make larger profit from the few fields I had. Size would not stop me from being rich. The RL USA has 277000K players, still the dumb are poor, the smart are rich and the prices deflate. This has nothing to do with size.

From the point of view of this blog, it's a huge luck that when I started playing 2 years ago I picked this server randomly. The various posts from several fields of business are surely more interesting than "How did I make 150G/day boost to my glyph business by decreasing the production costs of Jadefire Ink by 7.8%"
at 07:00

I have an alt on Arthas, where the queue during prime time is over 1000. From such a high population you'd expect quite a few like minded businessmen, but it's been more of a sandbox market for me.
Prices for low level cloths fluctuate so much that one can easily double his investments within the day. A greater essence is always split into 3 lesser counterparts for at least 50% profit. I read about your crystallized fire trick and bought eternals under 30g to split and sell at 6g, and hell, it's still my monopoly. Granted, I play on alliance side and it's mostly kids getting into high school, but still, it's a wonder how no one catches on!

I play on Magtheridon-US... our queue has been as high as 1500 at prime time - and I have made around 10k gold profit in the past week or so since I started reading this and a couple of other blogs.

The eternal fire market has fluctuated a little on our server... then spiked... I was buying every Eternal Fire for around 30-35g and reposting the crystallized for 5g per... the price of the eternals has since spiked when people saw them getting bought out... they are now in the 55g range... so what did I do? I changed gears and dumped the eternals and crystallized I had for about 2x profit on them all...

Do you have to pay more attention on the populated servers? definitely... but is it doable? ABSOLUTELY

I know of at least 3 people in my guild alone using many of the same tricks and such that I am to make gold... yet I still raked in 10k gold in profit last week... how? It's all about timing...

I've found that on a more populated server - timing becomes more important... watch for those times when things are generally cheaper/more expensive - and adjust accordingly... I do basically all my buying when I get home from work in the morning (usually around 8-10am server) and post my auctions so they are up for the entirety of prime time... and they always sell - I usually log on before work (around 7-8pm server) in prime time to undercut on some things if necessary, but I've found that even if I don't - I will generally log in to easily 3-4k gold in auctions the next morning...

I have to disagre a bit here, Trolls from my current server (an RPPvP server) have nothing better to do than make peoples life a misery, most of the time because pvp happened, sometimes because someone was being nice and friendly,

e.g.
-Player- Hi all i'm new to this server, looking forward to playing with you all.
-Troll- Die in a fire carebear!

so my credit to give Trolls are little to none.


I think its just differs from one server to another, even as regards to populations, likewise, attitudes and trends change depending on what server you play on say PvE compared to RPPvP, from my experience you can make huge margin profit on PvE, while RPpvP has a huge market for...crap....yes RP items and some greys you can sell for over 200g if you are lucky.

My experience is similar to the two first comenters, high population server/side (EU c´thun), all the "tricks of the trade" work in a similar way (Including eternal fire breaking!) you only have to be quicker as the oportunity window is shorter and monopolies last much less.

Intelligence is distributed in a bell curve...which means a small or large server will have the following:

A few really, really dumb people. They're the ones who post Feet of the Lynx for 2g.

A zeppelin-load of average people. They are going to fall for most of your AH tricks.

A few, really, really smart people. They're the ones who buy the Feet of the Lynx for 2g, and repost it for 200g and sell it to the average people.

My server has no queues, is considered Medium by Blizzard's standards, and I've made a fortune.

I also have an alt on Gilneas, usually considered High most nights, and have made boatloads of money there too.

A comment as an aside, so it may not meet your criteria to stay in. :)

Gobby, please try to be more tolerant of others' lack of linguistic artistry. You are obviously intelligent, but perseverating about other's grammatical and linguistic errors leaves you open to criticism yourself. I know English is not your first language and can tolerate the fact that virtually every paragraph you write is full of mistakes, but do find it subsequently hypocritical of you to jeer at others' lack of command of English.

BTW, I, too have long abandoned the crystallized fire biz, but there's always something out there, and it's generally worth checking in on your special niche areas from time to time as sometimes everyone abandons something like crystallized fire at once, allowing you to get back to your old tricks. :)