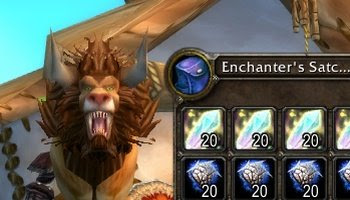 Since it's Christmas, and I'm AFK, I pre-created this post.

It's about two of my current businesses, or to be more accurate, about one of my late and one of my future businesses.

The old one was buying eternal earths, for 5-6G each, find a JC who create me Stoneguard Bands, disenchant them all, and selling the dusts and essences. 10-15G profit on each eternal.

Unfortunately this business went down due to the deflation of dust prices and elevation of eternals (that's probably my doing, if you buy something in large quantities it will eventually get more expensive). Of course this dust price deflation had its toll on my investment, lost around 800G.

My future investment involves the cursed dream shards. They are falling from each blue items, yet they are not needed in practically anything, therefor more or less useless dustholders.

Not anymore! Ghostcrawler said they will do something with them next patch. Maybe a new void shatter? Anyway I believe him and stockpile some (read as some full bags) shards.

I've wrote that I will stick to one character, my restodruid main, since I want to raid the endgame. Done. Naxx, Satharion, Vault cleared, Malygos is only up because we had to cancel the raid due to people went to Christmas vacation. In the first weeks of January he goes down. I'm a bit sad to announce the end of the current content as "he goes down" instead of "we will do our best on attempting to defeat him", but that's the new "endgame".

So my mage quests again, I have some great, business-related plans with him! This stirred a bit of my economy as I bought some stuff for his further gear. Yet I'm still above 50K excluding different investment on bank alts.
at 07:00

That disenchanting of that band has been one of my money makers :D

I think the Dream Shards will be more of a long term investment. I think the huge supply that's been building will first need to be used up before we see much of an increase in value.

Enchanting mats are still my main money-maker. I've tried the crystallized fires, but too many people continue to undercut me.

However, there still seems to be an endless supply of iLvl 154 and above greens that people list for less than 10g. DEing those and selling the dust/essences is a constant supply of gold.

I had forgotten about the ring, but decided to recheck some prices. The eternals on my server (Argent Dawn) were always too expensive, but now they're down to about 6g50s. Seems like I might have found another supply of greens to DE!

Enchanting mats have come down somewhat in price, but a 20 stack of dust is still about 110g-120g, and Greater Cosmics are about 28g-29g each.

My enchanter can't DE the bands, but I'm selling each one for 5 gold over what the eternals cost me, so I'm still making profit out of minutes worth of work.