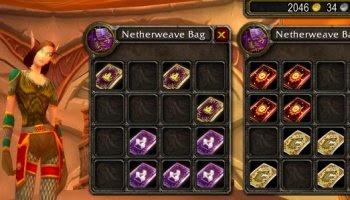 As I wrote, I attempted to craft myself a darkmoon trinket. Of course crafting such trinket alone is impossible. Since you can get one of 32 random cards, in order to craft a full set of 8 cards, with average luck you have to craft 87 cards. So I crafted cards and wanted to buy the missing ones. There were just two little problems:

My luck was way below average. I kept getting those stupid Chaos cards and only a few Nobles ones, which I wanted.

The AH was almost card-free. Almost no one listed cards. It seemed that people either ignored Darkmoon cards, or wanted to collect their own sets. I could sell some useless cards for nice price, yet I ended up around 4K frozen investment.

When you have frozen investments, you can do two things:
The reason I've chosen the second was that people started to list cards on the AH. It seems they also wanted to collect a full deck, failed and now follow the first scenario.

So Triara got a new job. She got my incomplete set of cards and also 2K to seek missing cards. The security blanket below the operation is that I still want the trinkets, so if I can't sell the decks, I will simply equip the trinkets for myself.
Why did people not crafted cards? Most probably because while these are great trinkets, they are also very expensive. While normally there is a premium segment of buyers, in WotLK, with the nerfed-to-the-ground raids they simply said "who cares? Sooner or later I get a good trinket for free." I did not expected this outcome, that's the reason I ended up 4K frozen.

Actually this reasoning works very well. A couple of days ago I got Majestic dragon figurine, the second best restodruid trinket after Darkmoon: Nobles. Still I hope that I can melt my 4K. If not, I'll have to dump 6K, which would make me less than happy, but that's exactly business is not for everyone: risky.
at 07:00