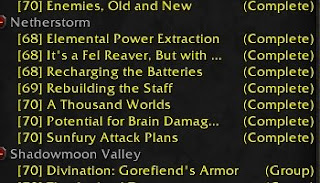 There is not much to do till WotLK comes, except for preparation for it. The lvl 70 items don't worth much, so unless you have lvl 65 greens, you should not bother upgrading them. However there is much to do to be prepared.
I've already written about tradeskills, money and a bit of honor. Warcraft econ wrote about preparation with honor, bankcleaning and tradeskills. WoW economist wrote also about bankcleaning. However I found an area not covered yet: quests.
You can perform quests in Outland and not return them. When the expansion comes out and we have XP bars again, you just fly a round in the deserted Outland returning quests and picking up XP. One quest provides around 13K XP, so 25 quests can give 325K XP.

I don't know if daily quests count, but it's probable since the Headless Horseman's firefighter daily quest provided XP for alts. However I don't take risks here, try to complete as many normal quests as possible.

However if daily quests give XP I will be a resident in the Isle of Dailies. While the new areas will be overcrowded, the Isle will be deserted, providing 12 lvl 70 quests in an hour. So if dailies give XP, Isle here I come!

Warning: there are speculations that these quests may not give XP just money. I cannot disprove this idea (though find it unlikely) so use the tip on your own risk!

Another preparation topic:
there is a large debate about the prices in WotLK. Some hints to help you:
at 06:39

Are you sure about this thing that completed quests will give xp? Have you got it confirmed from somewhere? I'm curious if it will work but I haven't found any information about it so far.

I'm unsure, but old world quests give XP beyond lvl 60, so I strongly assume it is the case. And if not, you still get money.

I read that during Classic > TBC transition, preTBC quest started before the expansion only yielded gold. Can't we supose the same will happen here ?

Hmm some of my guildies mentioned they did saved up quest pre-tbc but it wasn't that big of a boost because it doesn't scale with the lvl 60-61 range xp bar.

Regardless if you have a lot to turn in that's one of a headstart =P.

I'll log in on Beta this week to turn in a daily or some regular quest but I'm pretty sure it still gives xp like if your lvl 60 right now and do some stratlehome quest it will yield xp but not as much as doing quest in Outlands.

Hmm, that's a good idea, actually.
I don't think it'll work for dailies, however. Other than the BG daily, I don't know of any repeatable quests that grant XP. For most of them, the first time you do the quest you get XP, but the following turn ins only give rep (and the first one usually has a yellow exclamation mark rather than blue).

@tal: the "stop the fires" (Headless horseman in villages) quest gave normal quest XP (6500 on lvl 55) to my alt, so I assume the dailies are normal quest XP givers, except you cannot get them before max level, so you never see this XP