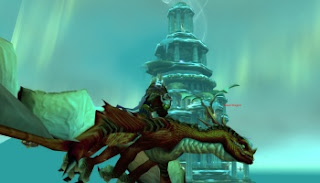 As most of you probably noticed, there are a bit too many people on Northrend. There are definitely more Keristrassas in Coldara than living enemies and the other lands are just as overcrowded.

However you can find hidden places to quest. There is much more quests available than needed for the XP jumps, so half of the quests will be left when lvl 80 reached. The good question is which half will be missed by most?

Most people, as they arrive to the next town from the previous land quest there until get enough XP for the next land. In Dragonblight, horde side it's Agmar's Hammer and the nearby Moaki Harbor. You can find more players than NPC-s there. However I have seen only a few in Wyrmrest Temple and barely a soul in Venomspite. So I keep on questing here, until these quest dry out. Then I go Grizzly, skip the first village and go to the back of it. When reached 75-76, move to the back of the next land. Always in the back. That's the goblin way!