I promised Burn Jita results, but Noir "worked" faster than I expected, so that post comes tomorrow.

Noir is a simple scammer bunch. They aren't GSF-related, they - like the Jita ISK doublers - gladly scam out anyone of his money. They make a contract with wording that allows them to take payment for nothing. During Burn Jita, they scammed me, because Goons paid them more. Instead of accepting that "yes, the contract can be meant as you can get money for Concord whoring", I gave them a 20B bounty on their titan and revealed their scammer nature, which was met with consensual community support. However, their next move was to scam the Goons who hired them to scam me.

Goonies were obviously upset for losing their highsec POCOs. During that contract Noir pulled their shady tricks by avoiding fighting the highsec Goon slaves and attacked POCOs far from Jita not even owned by Goonwaffe but some nameless house slave. While it wasn't what I wanted, I let it go, since the desperate cries of Powers "they don't count, they aren't Goonwaffe" were pretty funny and I also knew that sooner or later they run out of nameless POCOs. Well, the Goons thrown the towel and gave them all to RvB, knowing that I see them mainly as statues of Goons and won't bother taking RvB POCOs.

Anyway, the Goonies choose not to let it go and hired Noir both to defend them during Burn Jita and to get their POCOs back. And they indeed destroyed the POCOs of my holding corp and handed them to the highsec CFC members: 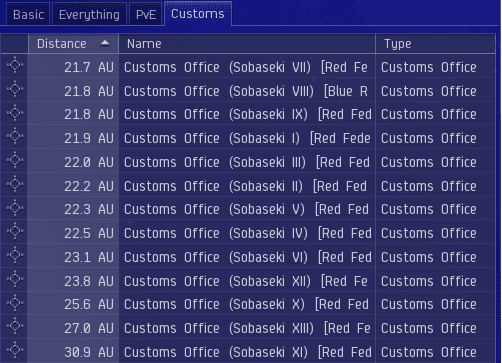 But Goonies had a rude awakening: they paid the fees of Noir and the replacement POCOs for nothing. The post where the new POCO doctrine and the hiring of Noir was declared ended with this picture: 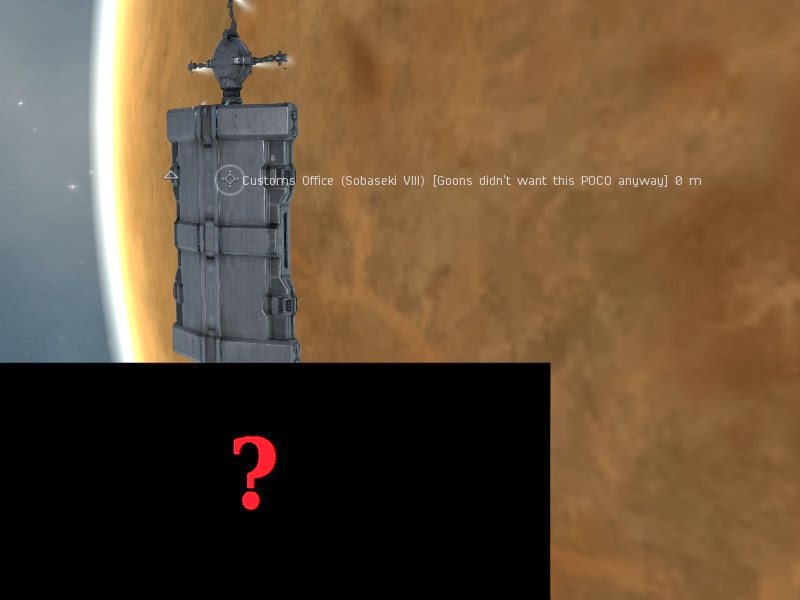 It's time to reveal the secret: 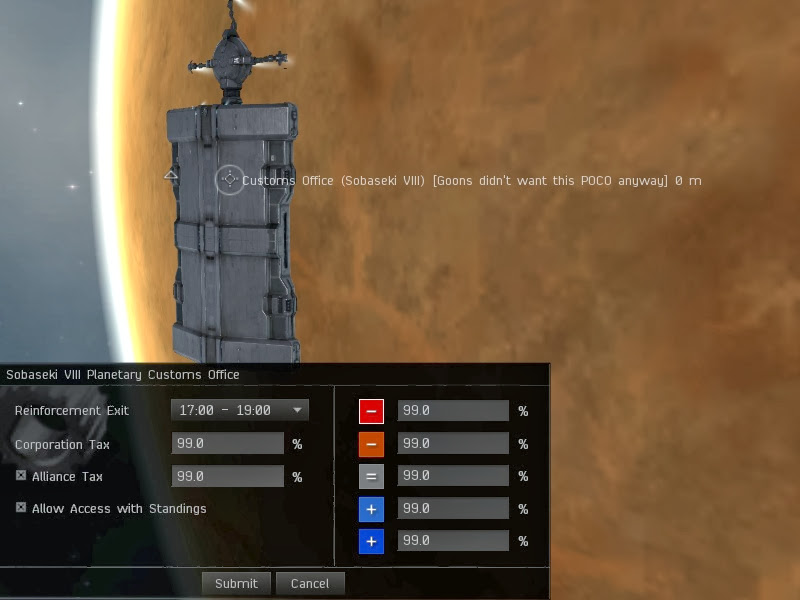 Deadzone POCOs, yay! Their purpose was to drive away clients, so when Goons take them back, they will have no income from them (unless they go and run PI on them themselves). In the first weeks there were hilarious moments of careless morons paying more tax than their PI worth, but the POCO takeover ended 6 weeks ago, so even the dumbest got the picture and removed their colonies from my POCOs. Since I planted them, I've been waiting for Goonies to take them back so I can troll them.

Of course Noir knew that. They set the tax rate to 99% for me. Back then we laughed how funny it will be when Goons send out their RvB slaves to grind down worthless POCOs. But of course they forgot to mention this to their new clients. They didn't say: "hey, those POCOs worth nothing, but if you want them, just park some AFK laser destroyers next to them, no one will care". Instead they took the multi-billion contract, promising fierce fighting against the defender mercs of the POCOs, probably cried some about the difficulties to get the price higher, then took it with a handful of AFK-ers. Look at this POCO for example: does the Noir fleet looks like one that expects a fight? They knew very well that the POCOs will be undefended.

They completed the letter of the contract, right? The POCOs are at the hands of the client. He should have been more careful and ask "don't you know of some trap or trick rigged by you to these POCOs". Shame on them for not writing a watertight contract, right? As you can see, Noir works hard for target satisfaction. Keep that in mind when you plan on hiring them!

Goons didnt hire us to remove your POCO's Gevlon, we did that purely for our own pleasure. Its a service we do for all those we end up with a contract-dispute, and for those that wants to be completely retarded and refuse to work out any sort of agreement afterwards. I know your gonna be deleting this comment ofc, cause you clearly dont think theres any other truth than the one you make up yourself, without even spending 5 minutes for fact-checking, but just you reading it enough to decide your deleting it in the first place is enough for me to know that your eyes was open to the real world for just a few sec before you put back your full Tinfoil Armor

Sure, your favorite time spending is shooting POCOs and replacing them. That's your version? Lovely!

Goonies were obviously upset for losing their highsec POCOs.
Obviously? I see no evidence for this.

Normally when goons are upset about something they turn the spin up to 10 and start sperging about it at any opportunity they can...

but nothing but silence from them on the POCOs.

This isn't their usual approach to things they are upset about.

Are you sure they are upset? if so, how?

They formed up for months to defend them, so they cared. They burned their highsec allies defending them (RvB activity is all time low, probably "AFK next to a POCO which isn't even RvB" isn't their idea of fun).

So I guess they wanted them badly and want them back.

"Sure, your favorite time spending is shooting POCOs and replacing them. That's your version? Lovely!"

I am pretty sure the pleasure was not in shooting the poco's but in undoing what you spent 4 months working towards as implied by their blog post. Yes other Eve entities have blogs to answer the question before you ask it.

There are so many things wrong with your post I don't know where to start.

We took the POCOs back not for financial gain nor as part of a contract. It was all done just to spite you. Yes we sold a POCO or two to RvB, gave one to Goonwaffe, and the rest to our friends from all over new eden. You're such a friend of HS dwellers that you screwed them on their PI and import/export tax. That's mighty noble of you.
I understand that this is your Blog and that you can write whatever you want but your readers should at least be able to hear the facts instead of you fabricating information. At least try, even a little, to post some truths.

So your version is: "we took baits that were purposefully placed there to be taken just to spite you"?

It's better than "we didn't see conflict in both attacking and defending Goons".

Well, it got you to mad-post, in your adorable tinfoil way, so, yep, from the way they gave away/sold them, it appears that the prime motive was "It will make Gevlon do a post".

That is a pretty neat trick Gevlon, very amusing.

I'm sure that the people who did PI on those planets weren't very happy though...

They formed up for months to defend them

Probably because they thought they were going to get lemmings to shoot at.. as soon as it looked as though they were ACTUALLY going to lose them they cut their loses.. this shows me the opposite of your assertion that they care.

They burned their highsec allies defending them (RvB activity is all time low, probably "AFK next to a POCO which isn't even RvB" isn't their idea of fun).

I think you are seeing a correlation and deciding it is causation. You are also clouding this with your own cognitive biases - that you believe you burnt them out, therefore their all time low activity is because of you. You have not shown a causal link.

So I guess they wanted them badly and want them back.

Ahah! you guess. You don't know. You have no evidence. You are making a guess (note: it would appear that noir are not redistributing them to goons, they are giving them to merc friends)

Bravo Gevlon! You gave me a good chuckle this morning. :)

I am curious about the commentors claiming Noir took out the POCOs to spite Gevlon though.
If Noir were aware of the tax rates being used purely to scrub planets in case the Goons tried to reclaim them, why attack them without payment?
If Noir weren't aware of this, why didn't they double check the tax rates before attacking and notice the massive 99%?

Regardless, there's no way random people are going to be using planets with 99% taxes, so it's obvious Gevlon couldn't care less about them. Seems like a waste of time to take them out to me, unless you're looking to replace the POCOs yourself.


Also, sure, Noir did a favour to your average carebear by removing high tax rate POCOs, but it's not like players couldn't use alternative planets in highsec, so those POCOs aren't going to make much difference in the grand scheme of things.
But, if bored Noir pilots want to take out high taxes on anything, I'm not going to complain!

The real question though, as I see it, is: will Goonwaffe/CFC reclaim their old POCOs? And if so, will Noir be defending them from Marmite/Lemmings/other mercs? :P

I can't get your last step here. Lots of assumption. No proof. A ilttle handwaving.

Noir took your POCOs and you call that a victory over Goon? I think they have nothing to do with it.


Let's see how the actual winners/losers are:

Happy - The guy at Noir who knew you'd trashed the asset value. He probably had a chuckle about all the work being done to grind the structures.

Probably happy - The Noir fleet, who probably enjoyed a "Let's bash Gevlon" moment. Their enjoyment would have probably been damped on seeing how you devalued the POCO and intented to lose it but they probably enjoyed reading your slightly irrational post.

Meh - RvB might be a little disapointed to have to get a massively devalued asset, but assuming they didn't pay Noir for it they can't be too grumpy.

1. If Goons didn't checked the PoCo rates before hypothetically paying for them, they deserve to get screwed.

2. Anyway, setting the tax to 0% for some days/weeks will attract people back.
(even if I don't see why people bother to setup PI in high sec)

@Ryanis: The most convenient factory planet location is next to tradehubs since for those kind of planets, the security rating doesn't matter at all.

As a long standing member of this community I can only as always speak for myself. I shot your POCO's for the pure enjoyment of it. Top damage on every one I was on and proud of it.

Louis:
I'm sure that the people who did PI on those planets weren't very happy though...

That's been Gevlon's MO throughout the POCO conflict. He tells High-sec people how terrible GSF is, and how RvB are their pets, and GRRRR. He tells them how much the Goons despise high-sec industrial players, despite the Goon POCOs having a very industrialist-friendly tax rate. Then he sets his own POCO tax rate high enough to pretty much deny PI access to anyone not in his corp (since it's a one-man corp, the taxes come back to him anyway, so no loss).

Gevlon Goblin is the High-Sec Industrialist's enemy that he likes to tell them GSF is.

"Gevlon Goblin is the High-Sec Industrialist's enemy that he likes to tell them GSF is."

All industrialists are each others' enemies. They're competitors.