What the Freight Club killboard tells us

A piece of breaking news before the post: It seems the end has reached the RMT site Somer Blink. After receiving a 10 days closure deadline, SOMER Blink is clearing its stash while they can, offering one Billion ISK RMT-ed money for a single GTC:

I'm not sure if I dare to suggest you to take it, as you might end up negwalleted, but I surely suggest that if you have any Blink Credit, bet on anything while you can and take ships and ISK, because after the deadline Somer will probably go offline and your remaining credits will be lost. They probably sell their remaining ISK to black hat RMT sites.


Doing morons of the week articles, I noticed that most of the jump freighters that died without suicide gank died to the same corp, Freight Club. So I collected some info about them and found things you need to see.

Freight Club is a small corp. Currently 13 members and Dotlan corp stats say they were in this magnitude for years. Yet their results in terms of billion ISK destroyed are stunning: 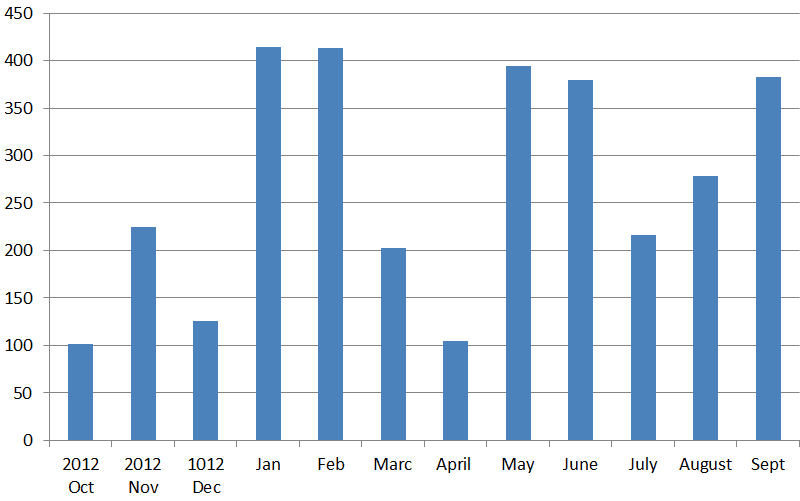 3.24T destroyed in the pictured one year period. As comparison, Goonwaffe had 11.5T destroyed in the same period, 3.5x more. With 230x more members and by getting on kills that aren’t exclusively theirs, but made by the 30K members CFC. Stunning difference.

Out of the 50 last Anshar Jump Freighter kills 23 was their doing. From the last 50 Rheas, 29. From Arks: 20. Nomads, 16. So they are responsible for a bit less than half of the JF kills in New Eden. In other words, the rest of EVE kills barely more JFs than these handful of guys/ Their in-game page shows 61 active and one pending wars, all started by them. They are practically in war with all nullsec entities, so all they need is to wait until some idiot drives a wardecced JF into one of their scouts. Then they black-ops jump to the nearest lowsec gate and catch it, while the scout suicide tackles it.

What’s we can learn here is that a small, but competent group can get results in the magnitude of much-much larger entities. This is something everyone must consider when he tries to evaluate the landscape of EVE. The nullsec “powerhouses” are extremely inefficient both ISK and kill-wise and they are so because they can be. There isn’t real competition that could force them to step up their game.

While CCP should really address the underlying issue: you can’t start a competitor because no one will believe you aren’t a Goon/PL/whatever spy. However we, the players should not wait for Santa Claus to save us. The results of Freight Club shows that it is possible to form effective organizations despite the horrible lack of implemented security. We can do better than simply pick one of the lousy organizations, led by a Falcon-drama-queen, join and press F1 when told.


On Monday I'll post the October ganking report of my corp. While our numbers aren't as great as of Freight Club, you'll see that we have nothing to be ashamed of either. Till then, here are more anti-tears: 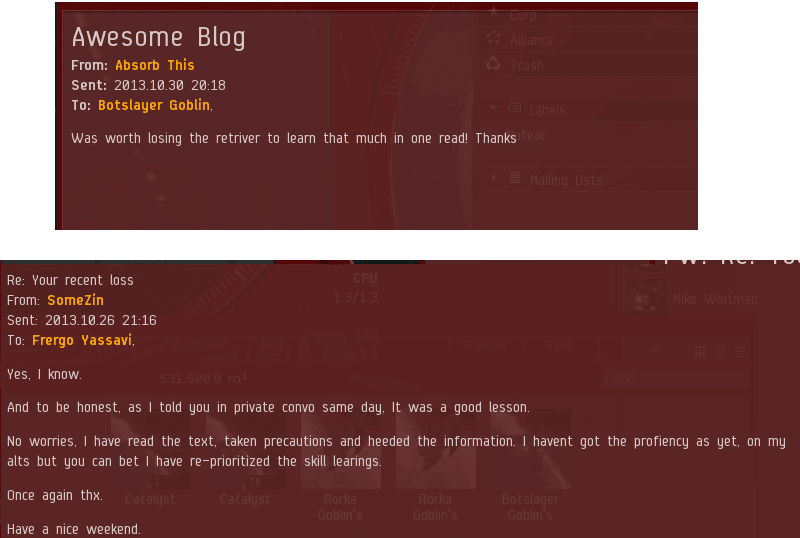 You're quite right to highlight their staggering statistics but I don't think you have their methodology figured out.

This is how I think they do it.

They log out alts in combat ships at gates that come into highsec from a much-traveled jump freighter pitstop like Chamemi. They put a neutral scout either in Chamemi or on the gate, possibly both.

Jump freighter jumps into highsec system (eg Parses) while simultaneously local lights up with red as Freight Club logs on.

Neutral alt possibly bumps JF out of alignment while combat ships are warping to grid.

Oh and I suspect freight club also have spies in most major alliances, possibly even mains.

The defence against this tactic is to have two jfs. One goes from lowsec into allied sov space. One, which is in NPC corp, moves deliveries from highsec to lowsec. If your (for example) Test Alliance jf never enters highsec it won't die to war decs.

I tired of these posts.
I'm not going to get drawn into another argument about how pulling arbitrary statistics from a killboard and comparing them between type of play make no sense.
We get it, you think KB isk value is the measurment of greatness right now. Well it's not.

That said, yes, these guys kill a lot of freighters, that being their only goal and all.

Wow, the way you go to justify your notion of "winning" EvE just baffles me and probably every reader of your blog.
Just because you got tired of looking at market spreadsheets and now only want to blow stuff up does not mean that is the sole greatest achievement in EvE.

Waiting for idiots to show up and exploiting the wardec mechanic is not comparable to building a huge virtual society based solely on anonymous internet players. Don't even try to compare.
Waiting for idiot JF's is as competent as a market scammer is for waiting for idiots not to notice the extra zero.

EvE is a sandbox, there is no winning statistic, there is only having fun or not.

A group of players solely focused on one goal will outperform a group with many goals, on that one goal. This isn't even something that you need to prove

GSFs goal is not to destroy as much value as possible. There are times when they do this, for example when it's a war of attrition, or when they are doing an interdiction, but day in day out their purpose is to have an empire.

Back when you started eve you said there is a win condition, holding all the sov. In this respect GSF is way ahead of you, even normalizing by number of members, as you hold 0 Sov. But I think you'd agree that saying Goblin is a failure as he holds 0 sov/char while goons have 3% sov/char would be a stupid argument

Isk destroyed has no inherent direct benefit to the player destroying it. It makes your own ISK more valuable, but that benefit is shared by EVERY eve player simultaneously. There are times when it can benefit you directly of course, like if you're heavily invested in the particular item you're destroying, or if the people holding what you are destroying are themselves a threat to your goal, but these are the exceptions, and do not apply to GSF the majority of the time. Outside of those exceptions, the benefit to the destroyer is just the isk value that's actually dropped, and in general this is lower than the opportunity cost

You've set yourself a goal, and you are achieving it admirably, probably among the best in the game even among people sharing your goal. But your continued comparison to people not sharing the goal is ridiculous. It's like Dasani saying look how good we are, we make way more water than Ford does even though they are 10 times our size. More importantly, you've achieved this excellence (and it is excellence, no argument there) at the expense of your original two stated goals, making isk and holding sov.

As a follow up to my last comment, similarly those people accusing you of not pvping or of killboard padding are making the same mistake. To them, the purpose of ISK efficiency is to win a war where two sides are trying to kill each other. And in that respect killing miners isn't achieving that goal and so is just padding. But that's not your goal. Your goal is to achieve maximum killboard stats, both efficiency and volume, and you are achieving that. All the arguments about it being a sandbox game support your own success and invalidate their complaints.

I've done with ISK, proving that a single player alone can get alliance level income.

Oh and there are a lot more than 4 measurable goals. Just 4 you choose to measure by. And you can't just translate then between individuals and alliances.

Even if you grant that those are the only four goals you're seeing yourself that you can't do even the first two at once.

So again unless the people you are comparing to have the same goal as their sole objective, it's not surprising not interesting that you beat them there

why not win the ally tournament before the sov war ?

They have out of corp suicide point sit on gate while the ones in corp are sitting logged out.

The big nullsec entities are generally clued in enough to not fucking fly JFs while under wardec. Their renters aren't so lucky though.

@Daniel: I will never win the AT because quick reaction time and muscle-memorizing perfect moves isn't something I like in a game. That's why I left WoW endgame.

If Somer ultimately wanted to cash out via EULA-violating RMT then throwing away isk at ~800m/$3 (1b Blink credit per GTC referral, ~80% lottery payout rate, >8% referral kickback) now would be beyond stupid.

"Let's sell as much of our ISK at a really bad price as we can; whatever is left we will then sell at 5 times the price" would be horrible business sense.

and you still find small gang and solo pvp fighting engagements to be "lolling around"?

Lol, the reason that nullsec entities have gotten somewhat clued in is because they've already been killed by freight.

Fun fact. At the 2013 fanfest presentation, whores and marmite were the two alliances that had done the most damage since inferno. Which really was freight club hopping between the two corps for extra decs, meaning that freight club was the most impactful corp or alliance in EVE from a isk damage done standpoint, at the time.

@Daniel: why, is there a point?

It's not me who call it lolling around, it's themselves! Just ask why they do it and they answer "for fun".

that and to proof skill.

@Gevlon
"It's not me who call it lolling around, it's themselves! Just ask why they do it and they answer "for fun".

You must realise, for most people "fun" does not have to be worthless.

Just because you have absolutely no fun whatsoever playing eve, or any game, and are putting up with the tedium of it purely to better your pvp score, your wallet balance, or to prove a point, does not mean that others cannot pvp in complex situations whilst having fun, can make their wallets extremely large whilst having fun, or can prove a point (such as the FW manip) whilst having a great deal of fun.

It is not clear which is the worse situation. The one who has "fun" (and is therefore social) whilst achieving things, or the one who hates what he does, but does it to improve his pixels.

But they name their goal and have fun on the side. Those who name "fun" as their goal are always just lolling around.

The time you enjoyed "lolling around" is not time wasted.

… after all, you managed to loll around. And your gravestone won't look any different for it.

@Druur: actually it will look different. It will tell NOTHING. Because the time you lolled around "enjoying yourself" is a time in your limited lifespan you didn't use to make something that worth engraving to your headstone.