Weekend minipost: First they laugh. Then they try to take credit.

I started supporting MoA two years ago, seeing their great numbers on the CFC killboard. Of course everyone laughed as "they are irrelevant NPC trash" and NC. and PL are the real deal. NC. failed two invasions, PL avoided conflict until everyone else were already fighting the Imperium. Don't get me wrong, their contribution is significant, especially as deterrent against Imperium supers. MoA on the other hand came out as the #1 Imperium killer of 2015 and took systems directly from Goons, not their lowliest of meatshields. Now what does the IwantISK media outlet do? Claims that MoA were their mercs:

Which is a flat out lie, not just because of the denial of MoA leader Gen EVE but because days ago they didn't even want to mention MoA among the coalition. Then they realized that it would be silly to act like MoA doesn't exist while they are capturing systems in PB. 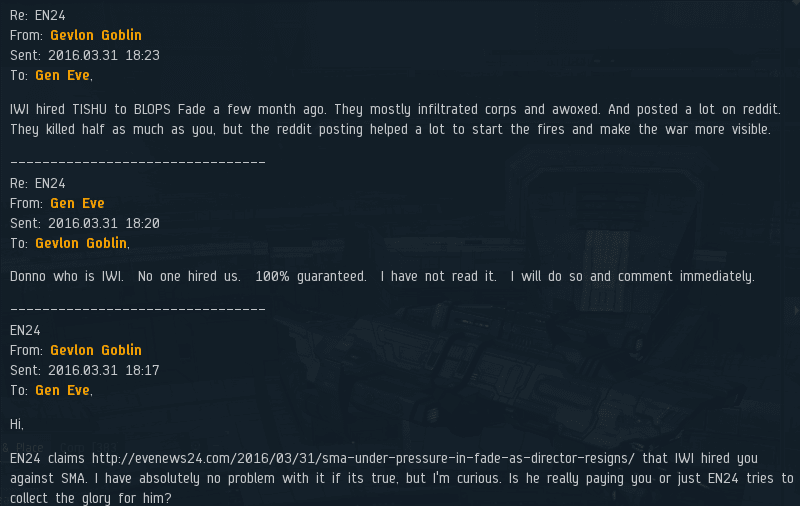 I do not want to belittle the contribution of the IWI crew just because they are vomit-inducing RMTer scum. Without their TISHU campaign, the stupid amount of reddit bragging and their intense drumming on EN24 the blood in the water wouldn't be so visible and the dogpiling wouldn't start when it did. A month ago I'd say "who cares, Goons die 3 months later". Now I say "Thank God they did it because New Jita would have cemented Goons forever". So I'm glad they did what they did. Without them, GRR would end inconclusively (the sandbox closes before Goons die) instead of with a spectacular victory.

PS: this moron managed to out"smart" me. I can't figure out why did he buy extractors in Amarr, just to move them to Nakri (random highsec station in Domain), extract his skills and sell the injectors there, while people paid 700M in Amarr. Anyway 3.5B for 2x5 jumps isn't that bad:

Goblin, thank you much for many great articles. I know nothing I will say can change your mind. However I do ask that you read what I say and consider it.

Myth: New jita will break the game Answer: it would if this wasn't eve. (more on that later)

Facts: it doesn't matter who is crowned king of the hill of those most likely to climb that tower they all have two things: and I win button (which DOESN'T WORK IN HIGHSEC)game mechanics deny them their I win button. the second thing they have is they are shit in sub cap. PL, NC, Goon really really not got in BS down throw weight.

So considering the king of the hill sucks at the only type of combat they are ALLOWED to use they do not get an I win token.

Now a bit of history: early in the history ever a group found that if they did X they could break the given assumptions of game mechanics.
This group set up camp in highsec and for days camped a gate and absorbed all the damage ccp could throw at them.

Some years later ccp tried a pay to win scheme and despite a 100 fold increase in ccps mechanics the player base was still able to melt a station and hold grid agains Concord for days.

There is one thing about the player base when ever ccp comes up with a brilliant money maker idea the player base revolts and melts it down. The new jita is an instant target the only thing worse then it being built at all is it might be built by someone else. In null and low OTECH had the super I win button to hold their gains here they won't.

I really think your fears are based in a extreme concept that I just can't see 22,000 people saying "oh well that's to hard" you claim to this is a social game then you know the studies that so socials would rather lose then split evenly. It is an odd human condition. Offer a person $10 for and hours work, when they are done tell them they can have $15 but only if they are ok with someone else getting $15 for doing nothing. about 80% the time people will take the $10 because its unfair that the other person gets something for free from my efforts. So yeah socials won't let your new jita stand, besides the only thing socials like more then their warpped view of moral right, is a huge target that will get them on IRL news.

@Provi Miner
- PL barely uses uses supers recently. They mostly fly Proteuses and their results are good. Most of the anti-Goon wars are done in subcaps.
- The cartel has fleets ready on day one, because they are large nullsec alliance.
- Any opposition takes time to organize.
- As soon as New Jita starts to operate, the cartel can buy off ANYONE. Sure, there will be a few "fight the power" guys, but the majority will just take the 30 silver.

@Provi, you have a point in general terms. One can threaten to sew up all the ISK, but pilots, both in terms of trained characters and (primarily) in terms of actual player butts in computer chairs, are the other big limiting factor of power.

And the people don't want pay-offs (because for non-RMTers, ISK as such is worthless, it can't buy food, drink and trips to Disneyland) they want their fun and status. There need to be bread and circuses and aspirational dreams.

If Gevlon's doom prophecy does come to pass (personally, I am on the fence) the 'cartel' will require some very skillful management. Once upon a time, the Goons were seen as nigh-unbeatable with limitless moon goo, too.

I wouldn't read too much into the EN24 article inclusion of MOA in the MBC. I suspect that's a genuine mistake by Tiberious Stargazer.

MOA are certainly not MBC members but we do & will continue to work woth them so long as our goals remain aligned. As a MOA line member I've greatly appreciated MBC back up in Pure Blind when we've needed it.

Be careful Gevlon, please do not do goonies work for them by sowing discord where there isn't any. Divided we fall so let's stay focused on the job at hand - destroying the CFC/Imperium.

Don't you think that if CFC start to lose sov that will just cement them more into the idea of running highsec citadels? They'd be able to pay off a lot of the "good guys" and some simply wouldn't go into highsec, so they wouldn;t be hit anywhere near as much as hey are now. The real people making the difference in this war are NC. and PL, without them the others wouldn't stand a chance.

I'm sure CCP has been looking into ways to reduce/stabilize the plex prices for a long time now and that they see an increase in isk sinks as only real possible solution.

I agree with you that the new taxes would hurt trading a lot and the economy wouldnt be able to support it for long but I doubt they would let the economy go down that far. It's a game and in a game you can change stuff. At the beginning yeah it's probably a very good driving force to get the plex price down and to have people accept citadels better.

CCP knows that citadels will be a conflict driver and war is good to get more people into the game. Yes that kind of income for a coalition would definately make them win the game but it'll start off slow and even with the high taxes not everyone will move to citadels instantly. It will start off with a slow income but will attract a lot more enemies. If enough enemies act together they will be able to take it down before it manages to be a huge source of income. CCP will also make more adjustments to the taxes and the costs of running a citadel to keep it balanced. I'm pretty sure they don't want to have the game implode on themselves.

I think you shouldn't just give up on eve yet, even if goons should be defeated, there are still other groups that deserve to have MOA come for them.

PL is not that good solo, when they come to provi they bring the hammer the moment a battle starts to turn they drop (same goes for NC) of course they always say "triage is not dropping the hammer" but we know that's a lie if you can't break their tank you lose and triage let them do it. When alone (NC and PL) and without "I win" on standby they are not very good in fact it became a routine for PL and NC to run sub fleets and then dropping caps the moment they were ingaged no matter the numbers on the field. You way over estimate their sub cap abilities especially without triage support. Now don't get me wrong there are some really good teams within PL and NC this is just an over all generalization. Now understand that in high sec it is N+1 and that's not Pl's game they are N+Cap = we don't care what you bring we win.

I thought you might like this https://zkillboard.com/kill/52983309/
Killed by an 'anyone can join', but neutral, public fleet.

I noticed the strange mentioning of us (MOA) on EN24 as well but in my oppinion the author was just very badly informed about what MOA is.
If you could buy MOA then Goons would have done it a Long time ago. They tried it with ISK and they tried it with Sov. God knows they tried so hard xD
Anyway, thank you Goblin Bro for the sponsorship that helped us grow and for being a real conflict driver and content creator.