Once upon a time there were wars in EVE

This post is part of the "Killboards without inflation" series.

Complaining about the "stagnation" of EVE is a common thing in the community on the platforms. As a firm believer of numbers, I compiled lists about the size of wars in EVE, using the 2014 and 2015 killboard data. While the 2015 data is not complete, just contains handpicked alliances, I have serious doubt that I missed any pair of significant alliances that fought each other. If I ignored just one partner, it still shows up.

Above all: what is a war? It's a continued and large ISK loss series of engagements between the same parties. If it's not continued between the same parties, it's a gankfest, one strong party attacks a weak who can't keep on fighting. This isn't interesting as the outcome is clear (CODE always wins). It's also politically irrelevant, as no one cares if some random highsec corp loses a triple-expanded Charon. If the fighting has no serious losses, it's rather a "fun brawl" between willing parties. No one cares what happens in the small complexes of faction warfare.

So below you can see the list of wars causing more than 500B damage of 2014 and 2015. Activity is the total damage the two alliances caused to each other. As always, the data is de-inflated, so if your alliance did 30% of the damage of the coalition fleet, you get 30% of the kills and not all of it: 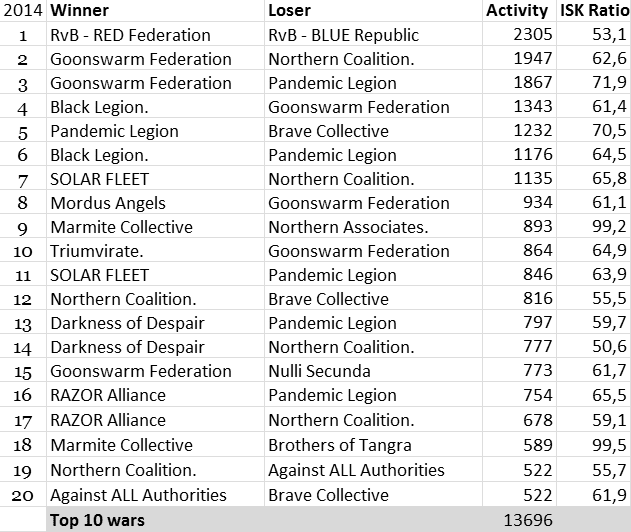 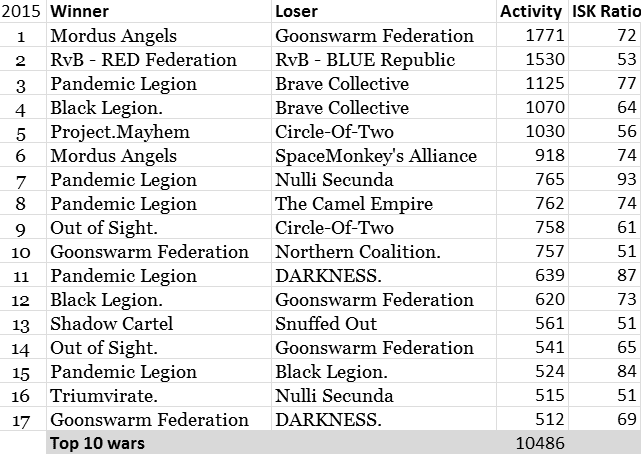 As you can see less big wars happened in 2015 and their value decreased a lot. But is it because of decrease of overall EVE activity? Let's see the top 5 active (kills + losses) alliances of both years, and see how big part of their activity was big wars: 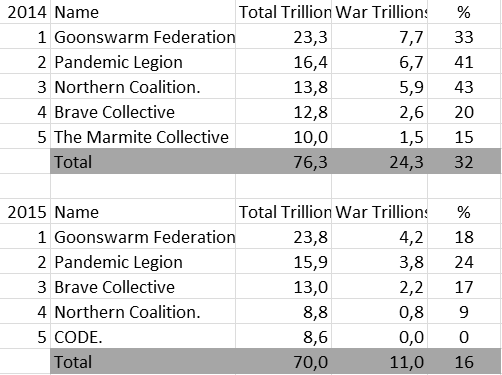 While the total activity of the big killers decreased, it doesn't explain that war activity ratio halving. Please note that 4 out of 5 of the top alliances are the same in the two years, only Marmite was replaced by CODE, so the very same alliances shifted from fighting to ganking. It's not that there is no PvP in EVE recently, it's that every big group avoids conflict with other big groups and just look for "safe content".

It is very important to notice how big part of the wars of 2015 were done by relatively small alliances who relentlessly attacked big ones. Mordus Angels, Project.Mayhem. and Out of Sight were involved in 5T worth of wars, while all big wars are just 14.4T. Considering that the biggest marketing pitch of EVE is "huge wars with hundreds of thousands of dollars destroyed" CCP should really focus on these remaining wars, encourage players to participate and pitch them to non-players.

PS: yes, this post was published once but had to be deleted because many wars were missing. Now it's fixed.

still don't buy it, I think your report is missing at least one provi war. But not real surprised cause you would have to identify all the provi alliances, and their kills, identify all the third partiers.

I can think of two major wars maybe three, Provi vs brave Provi vs NC and Provi vs goon

It cannot be a "war" without strategic in the game. MOA vs Goons is certainly a grudge, but MOA is not fighting over strategic assets. At best this is a group of organised highway men harassing an established state and it's assets.

And like in real life, the longer things go the more stable thing become.

@Provi Miner: It's not my fault that "Provi" is so fragmented that I can't really measure it. It's not just my problem, probably its military power is limited by constant need of coordination between alliances. I'm pretty sure Provi would be more stronger if the current coalition would merge into 1-2 alliances.

@Anon: By this logic PL had no wars at all in years. In EVE, land isn't that strategic, especially not after the Document of Shame. Everyone and his mother can get some if he attacks the right target and/or kisses the right ring.

Pl are mercs. they fight other peoples wars for them. That doesn't mean they dont fight wars.

By this logic practically no one is fighting any war. When was the last time Goons conquered new land? 2013?

I wouldn't define war as continued loss of ISK between same parties. It is a necessary feature of war, but not a sufficient one. F/ex what RvB are having is not war.

In that regard, none of the wars you listed are actually wars. In my opinion, even MoA is not really interested in actually ending Goons. Doubly so for Marmite.

@Maxim They are wars, in the same way the War on ISIS is a war. No one has any serious plans to end that, not really. Internationally it's a low level station keeping exercise with a lot of different countries that have political agendas. Cynical, but it is what it's shaping up to be. And it is a war. A crappy war, but a war.

Low level wars like that have always been the bread and butter of 0.0. MoA and Marmite just do it on a larger scale. Draining nothing wars that drag on for months or years and in aggregate add up to more than the big wars which get press.

Too many ship damage can come under the definition of farming/ganking. Shown in this case by the top war being rvb lolling, which makes the word "war" meaningless to being with.

> In EVE, land isn't that strategic, especially not after the Document of Shame.

that is kind of the point. The Document of Shame as you put it is a treaty. Treaties exist to stabilise relationships and reduce the need for war ("it is better if we work together for mutual gain than fight each other for mutual destruction").

The longer a geopolitical simulation runs, the more you can expect it to mirror real life. It wasn't so long ago in our planet's history that nation states were at each others' throats. But gradually over time the cost of these wars were seen as not worth it when measured against the gains that could be made by working together. Understanding that we had more in common than our differences which ultimately led to codification of treaties and alliances, establishment of treaty organisations and global pseudo governments which make the business of war more difficult...

The same has happened in Eve. The number of powers have gradually been whittled down to a mere handful who realise they have too much to lose, and instead see it more beneficial to work together. Oh there will be flashes and border skirmishes.. smaller entities will fight and die in proxy wars so that the big boys can pretend to get along and maintain their big empires.. but this is the world we live in now. It's not that there isn't any animosity or motivation for war, it's just that the value of what is to be lost by all sides is understood to be more than what can be gained.

People think the game is dying because of the blue donut - but really it's just the natural endgame of a vast geopolitical simulation. Things are stabilising. Will there be great wars again? Perhaps - but they will be far less frequent and more likely to be settled through diplomacy than outright victory.

The only major variable which could spark things off are CCP's mechanics changes... but at the moment it looks at though these changes are not sparking great wars, instead moving things towards smaller scale non strategic engagements by introducing jump fatigue and encouraging the capture of less land to break nulsec up. There are game design reasons for pursuing these of course (less hardware impact, more people "having fun" by owning land), but they do not favour the kinds of giant end of days style wars we've seen in the past. If that is what you want to see then you need to lobby for CCP to give nulsec entities something worth fighting over. Something that one region has that other regions want. And you need to give them the mechanics which allow them to build the empires and project the power that is necessary to make such fights worth while - i.e. a return to dominion sov and unchecked capital power projection. Is that a good thing to do? That depends on your goals. If your goals are to let more players play in the nulsec sandbox and fight meaningless skirmishes for fun then no, switching back is not a good idea. If your goal is to see an ecosystem where only one entity will ultimately survive through galactic domination then thats what needs to be done.

There's just nothing worth fighting over at the moment...certainly not worth risking what they have... so they don't. And wishing they would fight over nothing isn't going to make it happen.

then you miss your point completely. Consider the Korean war, was it a war? why yes yes it was. Wars are rarely if ever mano a mano far more its xyz vs abc yet that can tracked. But hey its your blog you can a war a war in any manner you want.

Goblin, have you thought about removing all the ganks from the Goon kills to see how bad they really are?