I already used the ratings of alexa.com, the site evaluation program of amazon.com. One of its features is historic graph that shows the ranking of a site if it's over 100K. For example here is CNN.com. Let's check the same ratings for TheMittani.com: 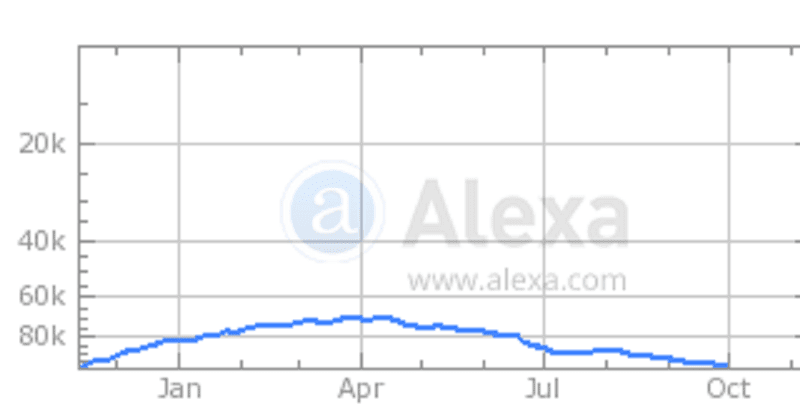 Of course it's still higher than my blog, they have the 43.2K position in the US, I have 244.2K (for some reason it doesn't track my out of US traffic). But my blog is a non-profit one-man blog. If my traffic goes down, it only affects my mood as I have no ads, PLEX-affiliate links or media deals. The Goon propaganda site on the other hand must pay a staff and line the pocket of its owner. So decreasing traffic means less money. They started well due to their initial success of posing as an EVE news site. But soon the non-Imperium contributors left and the bias of the rest became obvious. While other game info seems fine, it's inferior to game-specific sites. A World of Warships information seeker would surely not bookmark TMC as his favorite.

This explains both the need for Kickstarter money and the failure of the campaign. They have increasing bills to pay with decreasing income, making them desperate. But since they lost most of their community interest, they could only preach to the Goons, and they choose to rat in their medium shield booster carriers instead of pledging real money. The cabal of the Evil is probably desperately contemplating how is it possible that two years ago thousands of players were ready to give them hundreds of hours of their lives shooting structures in bombers and now they refuse to give the price of a coffee (If 30K Imperium members give $5, they are funded). Let me answer: mostly they lost because of TMC.

The CFC used to have an identity. Socials love that. They were ready to donate countless of unfun hours to protect being the "badass monsters of EVE". In the age of the Fountain war, Goons and allies were proud to be ones. They looked deep down on the "pubbies" (ignoring the fact that except for the 2K Goonwaffe members, they were "pubbies"). They looked at themselves as part of an undefeatable war machine. The (mostly imagined) fear and cries of their enemies kept them warm. Today it's gone. They look at themselves as pathetic carebears running from MoA. While they still play the game and may even enjoy it, this is no longer linked to their Goon identity. If tomorrow MoA would evict Goonswarm from Deklein, most "Goons" would gladly pay to stay in Deklein in "MoA Citizens".

To get more PLEX link clickers, they recruited literally anybody regardless of cultural compatibility or performance. To market TMC to the wider EVE community, they also had to make deals with the leaders of all EVE. Me or Xenuria calling them "Goon propaganda site" isn't that relevant, but still, they recruited Xenuria even tried to recruit me. Grath, Vince, progod, Elo, coreblood and the rest of EVE calling them such would deny them traffic. So they had to accept their terms in order to not get boycotted. And the terms were catastrophic: abandoning their conquests during the N3 war, including B-R. This was probably the largest demotivator to those who identified themselves as Goons. Their endless hours of bombless bomber flying was for nothing, the week they spent hellcamping N2S was for nothing, the regions were given back in return of some links and guest posts in TMC. The in-game goals that provided the content, the pride and joy of Goons were replaced with media shit. This was crowned by driving their players into the unwinnable burn Amarr campaign just because "Pope Maximilian" looked a cool media gimmic.

In the meantime, during their hopeless quest to look unbiased, they even lost their old "in the face" Goon voice. Their sterilized new voice convinced nobody, but alienated Goons and those who used to get mad at Goons. The Ten Ton Hammer articles of The Mittani were must be read for even those who hated him. The TMC articles are just "meh", with the only author there with the ability to raise any emotion is James 315. As Ripard perfectly said, this is a problem of hats. People go to TheMittani.com and find the "extremely pedestrian and unfunny" posts of Alex. TMC isn't unbiased enough to be used by anyone for information. TMC isn't "Ann Coulter" enough to satisfy the bloodlust of "true Goons" and make others mad.

How can they dig themselves out of this hole? I see three ways: One more thing to add: while writing down #3 I realized how CCP maneuvered itself into the position where people call them bedfellows of Goons without any bad intention. Let me give two lists of content creators:


You probably agree with the group titles. However these aren't terms you can write in a corporate doctrine. So let me give new group descriptions. The first group create content that affects no one negatively. A successful Signal Cartel op or a new post of Rixx will surely make no one frustrated or angry. In the case of the second group, it's guaranteed: when they say "op success", someone is mad or frustrated. This is fine in a competitive game. However it means that if CCP positively interact with anyone in the second group, they get a share of the hate the group gets. CCP saw that interacting with the first group make them popular and increases customer satisfaction. The wrongfully generalized it to all content creators, causing their troubles.

The same goes to any site: if Themittani.com or my blog is meant to be read by wide audiences, the content creators behind them must maneuver themselves to the first group. I choose not to and TMC is entitled to do the same, that's the #2 option. CCP on the other hand must not partner itself with any of these sites, because it automatically means allying with the controversial group behind it. Imagine that CCP representatives would be daily contributors to my blog and call The Mittani a madman. Goons would be rightfully upset as they are customers too.
at 03:00

How does that compare to http://www.alexa.com/siteinfo/eveonline.com ? They have a similar shaped graph. Any chance they're just getting the same percent of eve players and the number of eve players is what fluctuates?

Why doesn't The Mittani conquer all nullsec? With a handful of exceptions most people in Null would just become Imperium peons instead of X Death or Test peons?

Wouldn't that be a way to salvage his reputation and his website?

@Basil: great find. However it reinforces that TMC failed to attract most EVE players.

@Stabs: yes, it would salvage his reputation and website. I'm sure he regrets not doing it after B-R. However he cannot do it now. As Providence proves, as soon as they leave home, MoA sets it on fire.

The main problem is that while Legion/Shadow of xxDeathxx is weaker than Imperium, it has no "grudge" enemies, so mostly left alone, while the Imperium must fight bushfires every day due to everyone hating them.

"Why doesn't The Mittani conquer all nullsec?"
They can't maintain it.
They need to blob in order to conquer, which generally turns into grinding as people refuse to fight. So, line members get bored.
Once region is conquered, they need to go to the next, natives come back to the previous one and just flip it back: CFC / The Imperium cannot defend it.

" However it reinforces that TMC failed to attract most EVE players"

Is that the goal of it?

If you fail, it implies you were aiming for it.

You have failed to destroy Goons so far...you have not failed to convince people that Rand was the greatest philosopher of the 20th century.


"The main problem is that while Legion/Shadow of xxDeathxx is weaker than Imperium, it has no "grudge" enemies, so mostly left alone, while the Imperium must fight bushfires every day due to everyone hating them."

Do you think if they were the same size as Imperium, Legion/Shadow would have 0 grudge enemies?

Would you still spend every waking moment hating Imperium, and crowing over every ship loss if they were a small nullsec entity with the same principals and behaviour they have now?

In Wow, the biggest raid guilds on the server are hated....they are probably evil people too, because no one hates another group for no reason, right?

The EVE forums fail to attract most EVE players. Most people simply play the game.

Legion/Shadow is bigger than Imperium. N3 was much bigger a year ago and no one cared. They are hated because of their behavior, not their size.

Most people hate the CFC cause most people got their asses kicked by them, because their playstyle differs a lot from most others: What you gonna do when 800+ guys are hellcamping you station for a week or two?

There is nothing you can do. It's that kind of attitude towards the game and their horde status, that bothers people. Oh and, they are also pretty smug about everything.

Much like you, who claims to be the biggest contributor to their lost of Fontain/Delve, when really, they had to cut these regions lose cause they could not reach them anymore with the, back in the day, new inroduced jump fartique game mechanics.

"they refuse to give the price of a coffee (If 30K Imperium members give $5, they are funded)."

You got some very expensive coffee there.

In any case, I don't think they would have paid $5 either way, people are strange that way. Most give away their time for free, while carefully considering what they get from their money.