Someone has to lose space for someone to gain!

I keep watching "the EVE community" rallying against CCP Fozzie, because of Aegis Sov. Their line is "too hard, too not fun". The same people where previously crying a river about Nullsec being stagnant. They still admit that nullsec before Aegis was boring, but they claim that the changes were wrong.

Maybe they are right, but it doesn't matter, because every change that works (and many that doesn't) would make them mad. Why? Because there were no unclaimed regions before Aegis. So for "new groups" to get space, someone had to lose his space. Losing is never fun, it sucks. So old owners must suck!

"The community" doesn't understand that CCP has to protect the mythical "new blood" from them! They are holding all the systems, they signed the non-infrastructure pacts, they staged the fights that turned the "dark evil universe" into "Arathi basin bridge", they farmed BRAVE, the only example of the heralded "new blood", it's all their fault. The problem is that they don't understand that they were active upholders of the establishment they hated. Yes, if you are a PL pilot who had fun farming BRAVE, you are the problem, you made nullsec stagnant, as without you Grath would be nothing but a solo PvP-er in lowsec. Yes, you, busy little Ishtar ratter in Deklein are the cause of the BoTLord treaty, without your F1 pushing and ratting tax, the Evil One would be no one. If you were in N3, xxDeath, building renter empires, it's your fault that most space was empty as you actively kept it empty with your teleporting Aeons.

So it's you who has to lose his space, you have to chase entosis trolls, you have to watch fatigue timers, you have to run around contesting nodes or EVE will never be better! Deal with it! The only alternative is what the Evil Empire did: flee from half of your space!


PS: for anyone who think personal skill does not matter, please check the killboard of Crackaapat geegee: 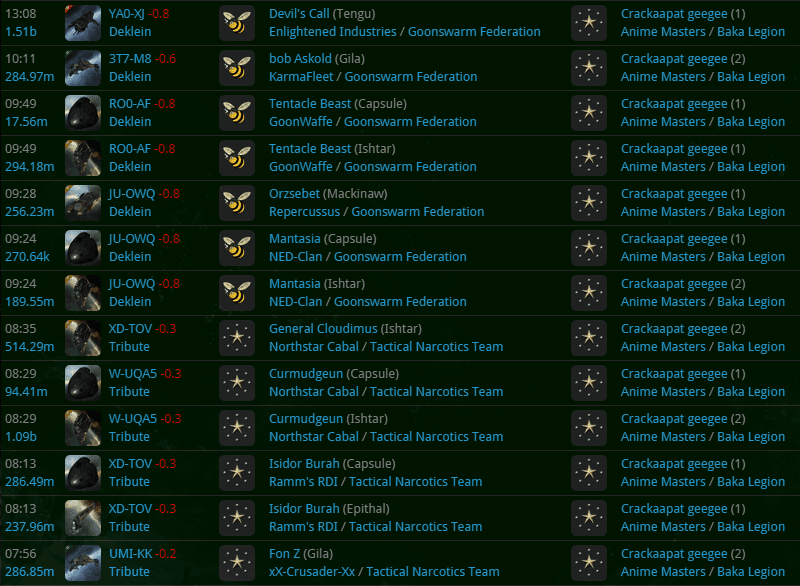 Yes, that's 9 kills with 5B in one day without a single loss.

There is actually alot of space now controlled by various small alliances, and some regions have systems currently unclaimed.

But even these small alliances must sign NIP to survive, otherwise larger entities just roll them.

You are essentially blaming players for trying to play within a poor game design paradigm. "If only players played better, the game would be better!" - kind of thing.

The blame, always, lies with the devs. If you are blaming the players, then you are elevating players to dev status, assuming that they are responsible for the state of the game. However, as far as i can see, for all the "eve is meta sandbox" preaching, players really don't have any good tools for creating their own games within Eve framework.

So yeah, ultimately CCP is to blame for people not having fun. And saying that "you had your fun, now other people will have fun at your expense" is not really a good solution - or even a solution at all.

I wouldn't necessary blame specifically Fozzie, or specifically blame him in the particular way he is being blamed now. The problem is with Eve as a concept, really.

@Maxim: in a PvP game one side has fun, the other side has fail. CCP can do nothing about that.

@Gevlon
Believe it or not, there are ways to create losses in such a way that they feel both justified and fun for the losing side.
Entosis ain't it.

That is simply not true. It is possible to have fun while losing in a PvP game. For example I often enjoy situations where I am the underdog. The opposing team either has me outgeared or outnumbered. Obviously I lose a lot of those situations, but I think being the underdog always brings out the best in me because I know that in order to win I have to play at my absolute best. I also learn a lot being the underdog because you have to be more creative since you just can't conventionally overpower your opponent.

Similarly, it is possible to not have fun while winning. I imagine that if I played a bunch of games of chess against 5 year olds I would win a lot, but it would still be boring and not very fun. It would be too easy and become mindless. High sec mining would be more fun.

Maxim is spot on. The devs bear a lot of responsibility of making sure a PvP game has intriguing gameplay. Right now nullsec SOV does not make for interesting gameplay.

If you don't have fun, move out of nullsec, there are plenty of things you can do to "create your own games within EVE framework". If nullsec became not fun for you with the changes, go do something else.

@Maxim & Jim L
I agree that the devs' job is to make the game fun to play - but you can't please everyone all of the time.

Gevlon has a point; not that it's nullsec players' 'fault' that sov was boring, but that any change to shake things up is almost required to make the game less fun for them in the short term.

The current nullsec playerbase is self-selected as the players who most liked the old system of sov. Yes, a lot of them had complaints ... but ultimately, they still chose sov over lowsec/highsec/NPC null. Those of us who really didn't like the old sov system went elsewhere.

Suggesting that CCP should find a way to do all of that without provoking the buckets of tears we're currently seeing spilling over the internet is a very tall order indeed.

Goblin, speaking of the new system, here's some content it created.https://zkillboard.com/kill/49095017/

@Maxim: in a PvP game one side has fun, the other side has fail. CCP can do nothing about that.

Let's take a look at an example: ED-L9T.

Darkness failed for weeks to take back that system, and that station. Along the way, they got fights - they won some, lost others. Ultimately, they won, we lost.

We had a blast. It was amazingly fun, even losing a carrier in a desperate attempt to suicide-triage was fun as hell. And it wasn't just us having fun. Darkness enjoyed the hell out of themselves, PL kept coming, NCdot kept coming, folks kept turning out to make the journey from Deklein, BRAVE showed up...

We were all having fun, win or lose.

So, to say only the winner has fun, the way you've all-but-explicitly-said, even where Sov is on the line, is patently false. You're wrong.

And you won't dare admit it. Not to me. Because we're still in your head.

Message Arrendis in-game, and I'll put you in touch w/some folks - let's see if we can't find you a Section 8 Corp that isn't run by an asshole, hey?

@Jim L - I know exactly what you mean. Sometimes half the fun, despite knowing you are going to lose horribly, is to throw a wrench into the gears trying to grind you and giggle like a maniac as they become frustrated that you are not just going to lie down and die like some sheep.

In the end, you often learn more about your opponents limitations than you otherwise would have if you simply ran away and hid.

@"Move out of nullsec" anon
For the record, I live in nullsec and like it. That's including PI and managing all the non-ISK assets. I still think the design could be better.

I believe entosis cruiser hunt is more interesting than nothing.

So, just on the highly unlikely chance that you'll reply here, I posit the same question:

If PL or NCdot brings supers to Deklein, they'll have the forces they have on-hand. We'll have literally everything we can scramble to hold them down long enough for us to get people resubbed, logged in, and jumping on top of them.

If we were to attack PL or NCdot in... uhm... well, they don't actually have anywhere to attack them in, do they?

@Arrendis: the Rental empires ended with the announce of Aegis Sov. Had CCP not end Dominion, they'd stand and I believe the treaty too.

Strange. BL and OOS had no problem dropping in YAO. Maybe they are so much better than PL. Or, they are not bound by treaties.

@Arrendis: the Rental empires ended with the announce of Aegis Sov. Had CCP not end Dominion, they'd stand and I believe the treaty too.

And if the Soviet Union hadn't collapsed it'd still exist, too. The BOTLRD treaty's dead, and has been for quite some time now. OTEC's been functionally dead since Vince violated it to attack us 3 years ago.

As for YA0 - BL hasn't dropped in YA0 since Phoebe hit. OOS has, once, but they live relatively close by, and they dropped dreads - which, let's face it, are disposable - to get a titan and a supercarrier. Are OOS better than PL? Nah. Here's the cold, hard facts of it:

OOS is closer. They're in a position to try something like this with disposable assets. Those dreads were reported in our intel channels repeatedly as they moved through Venal and Tribute. They never should've gotten that far, but our FC crew and our allies' FCs dropped the ball, big time. The dreads should have been counter-dropped en masse and destroyed, but with our focus on Providence... like I said: we dropped the ball.

PL's supercapitals are not in the same position, nor are they nearly as disposable. PL's also not sitting on top of the massive renter income anymore, so they're a fair bit more protective of their supercapitals - they'll drop them on Darkness, in small numbers, or in Delve, or near where their capitals and subcaps are staged... but they won't stick their neck out where they can get their head cut off.

Would PL do the same thing with dreads? Sure, if they could get them into jump range of YA0 unnoticed. OOS got lucky - and that's not to dismiss what they did at all. Yes, it took some luck, and it took us being lax, but they didn't waste the opportunity, and I say good on them.

But BL? BL hasn't dropped caps in Deklein in a year. Gonna say there's a treaty there, too?

@Gevlon
Entosis is indeed better than nothing. But why should i even play Eve if the best it has to offer is Entosis? Not like there aren't a myriad of other games out there, many with similar sandboxy features (including economic ones)