Every game (or any activity) needs performance evaluation. In a PvP game it's customary to look at kill-loss statistics. These series of posts are created because the usual tool for this in EVE - zkillboard.com - is extremely faulty. The individual kills are reliable - though suffering from being a third party tool depending on players uploading APIs - but the statistics are horrible. If we add the losses of all pilots on Zkillboard, we get 349T, if we add their kills, we get 4902T. So an average EVE pilot has 14:1 damage:loss ratio. Wonderful, everyone is awesome here.

Before proceeding, we must address the data itself. It's coming from a zkillboard dump published somewhere on Reddit that Hanura H'arasch found and converted it into human-readable format that even an IT-rookie like myself can process. The kills start from 2008 and end around July 2014. I grabbed the 2013 kills for these posts. 230K kills are listed among them with -1 damage. Most of them are just errors, having no zkillboard page. Few of them (remember, few % of 230K is a lot) link to valid kills with NPC killers only. So this database is not a perfect mirror of what Zkillboard has and Zkillboard is not a perfect mirror of EVE Online. But, 349T damage is 73% of 477T reported by CCP for 2013, so most kills are here. We shall also consider that Zkillboard uses CCP kill IDs, and the lowest ID in the database is 27500776, the largest is 35611169, leaving space fore 8110394 kills, we can assume that many kills stored by CCP. The database contains 5325174 API verified, not -1 damage kills, which is 66% of the total kills are listed. As 73 is bigger than 66, we can conclude that mostly low ISK kills are missing (like the ship losses of newbies to rats).

Now, back to the problem. It is much bigger than simply inflating the damage of everyone 14 times. Below you can see a chart plotting two resonable damage distributions (everyone on the kill gets 1/N part of it and everyone gets credited according to damage done) against inflated (whored) damage of pilots in 2013: 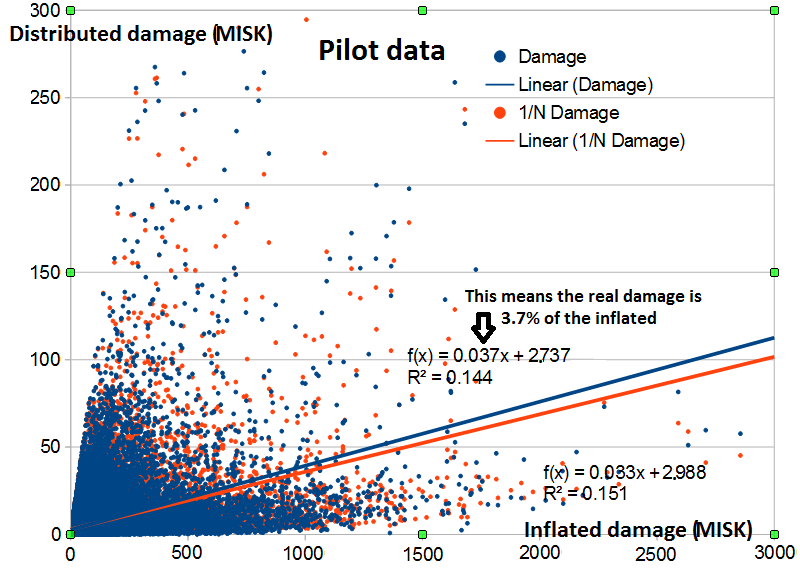 0.14-0.15 R2 means useless correlation. This is because damage inflation happens very differently among pilots: solo PvP-ers (leftmost dots) have none, someone who flies a blob has extreme. Because of this low correlation the pilot "kill numbers" are useless and do not help comparing two pilots. 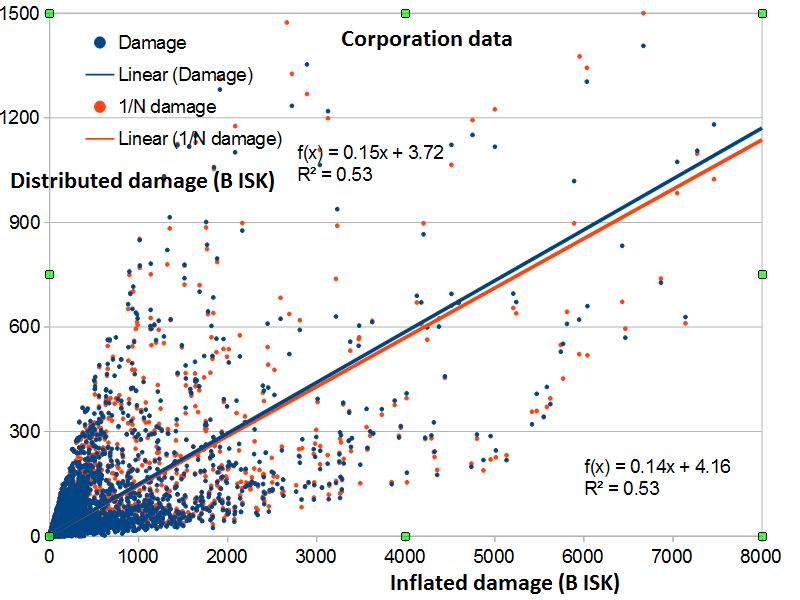 Since corps are bigger than players, the inflation effect is smaller. From the linear coefficient you can see that corps make 14-15% of the damage Zkillboard gives them (which is an improvement from the 3-4% pilots do), and the correlation coefficient is also higher, 0.53, which is still pretty bad. We can tell something about a corp, but not much. A corp with smaller Zkillboard kill number can be easily more active, just not blob-flyer. 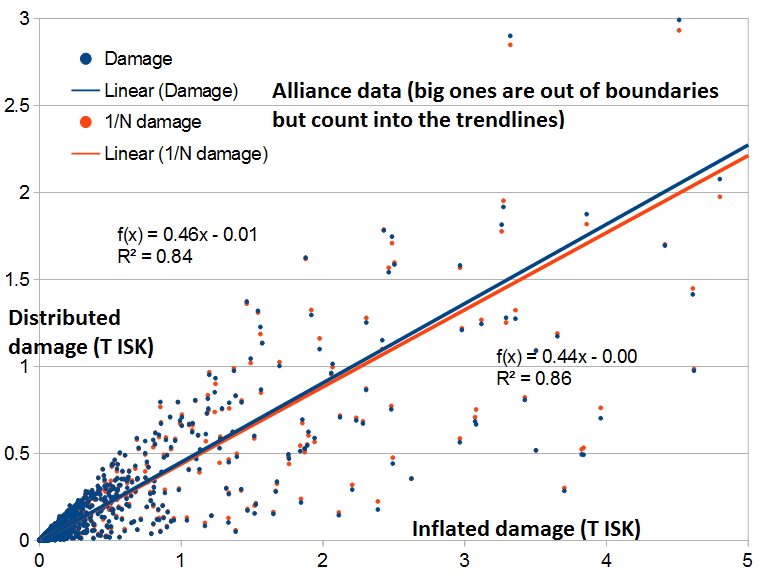 Alliances on average do 45% of the damage Zkillboard gives them and the correlation coefficient is almost decent, so you can compare two alliances, just get a largely inflated data.

Now you can see that pilots, corps and alliances using their killboard data are self-deluding idiots or lying propagandists. Many built inflated egos over the years. It's time to see the truth. Or at least what the truth was two years ago. Hopefully I'll be able to get more recent data.

Distributing a kill report among the participants is necessarily arbitrary. I compare equal (where everyone on the kill gets 1/N damage) and damage contribution based distributions: 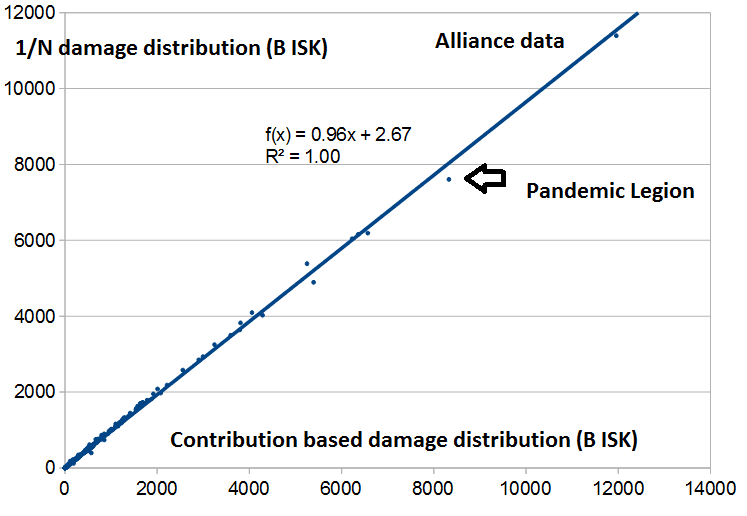 As you can see the two distributions are practically the same, with PL being the most unusual, due to bringing big guns and getting higher damage contribution than most. The point is that no matter how you distribute the kill, you get very similar results, so the "we fly tackle and logi, that's why we don't have damage on your charts" is a lie.

This will be a long series of posts, as there is extreme amount of data was processed. The parts:
at 03:00

This is, again, a very interesting data analysis. The only question that befalls me everytime after reading such posts is, why the hell do killboards not de-whore the killdata? They deliberately display faulty and useless statistics and, even worse, eeleete peeveepeeers masturbate to these uselaess data sets. Some peeveepee corps do require from their pilots that the are kb green or have a minimum number of kills or kill/loos ratio. Which leads to a rather annoying effect of super duper eeleete pvpers roaming highsec systems and ganking miners and haulers.
this is as much a brain afk activity as can be, next to mining itself. Gevlon has proven this.
It is the same boring and repetitive activity like ratting, only that pvpers do not shoot red crosses, they shoot morons. Why? content? Nope, it is just to tune up the personal killboard statistics... Lame, unfortunately, ultra lame...

But, and this is where WoW comes into EVE. Apparently CCP wants us to believe that we ALL are elite pvpers, just whore on a kill in some community events and become a super hero, who has over 1B kill worth against 100M loss...

This is ridiculous and people who have understood know this.


Only if you *care* about kill/loss statistics..

The Imperium have pretty terrible historic K/L stats. They had horrible K/L stats and yet rolled every single "elite pvp" alliance they ever ran up against into the dirt... why? because what matters is whether you can sustatin losses while killing more than your enemy can sustain. Even if that means being on the wrong side of the kill/loss ledger..

Win, at any cost, is the only strategy. Efficiency doesn't even come into it until somebody else with a win at any cost attitude comes your way.

That is to say, if your ethos is win at any cost and every one of your enemies weigh the cost on killboards, you will destroy all of your enemies as long as you can pump money into covering your losses. When you have nearly infinite capacity to earn isk (as is possible in a game like eve with no hard cap on what you can earn), Kills vs Losses means nothing.

"so the "we fly tackle and logi, that's why we don't have damage on your charts" is a lie"
=> Except real logis won't even show on the kill because they did no damage. SO you won't have them in your data.
But that's true for most tacklers.

I agree with Ryanis.

How does your data show (as according to your claim it accounts for it) those who do 0 dmg because they are flying logi?

If they have no whoring gun or drones, it doesn't.

I bet that many those graphs would look a lot better if both axis were in Log scale.

How do you know "only alliance/corp directors would visit it looking for data for corp/pilot evaluations"? Have you tried it? Maybe it would be wildly popular?