Authority in EVE Online (and capitalism)

On Monday, I advised to ignore the trolls and madmen that pollute every single community. I got an interesting comment that tells that while most of them are indeed worth ignoring, some of them can be of authority, and messing with them can be ones undoing. They are above the law due to being connected and important, therefore they can abuse me if they wish without risk of punishment from the leaders.

Let me tell why this is horribly wrong, first in EVE, then in real life. EVE has a very awkward - but very real - economy. In most other MMOs you get "rich" by doing "heroic" acts. If you want high ilvl gear in WoW, you must either kill the big nasty endbosses or rank high on the Arena PvP tournament. If you are mediocre, you'll be poor and irrelevant.

In EVE, the way to get rich is being mediocre and irrelevant. Live in highsec or Minmatar FW and farm all by yourself (with your alts). Some do it by a semi-AFK mining fleet, others are running missions for LP, some trade. Each and every one of them has zero effect on the EVE story and very minimal effect on the life of others. But such "carebears" amasses the wealth. For this reason most nullsec players have a highsec "alt" who does this invisible job of farming to support the "main".

This is very much like real life: if you shut up, don't get involved in big social life and just focus on your job, you get money. Sure everyone will consider you a sorry loser with no friends, but you'll have the money while they throw their awesome parties in an underwater home.

If you move to nullsec, you do it financially altruistically. You either do it for "a greater good", some idea of yours, or to socialize, to be with people who like you (or at least pretend to). Both in EVE nullsec and real life you pay money and time (= money) to participate in this, money and time you can't reasonably expect to get back. Please note that it doesn't contradict with null ratting income or salary of politicians. Always consider opportunity cost. By the time you rat a billion you could get 3 in highsec, so your real profit is -2. Similarly the salary of someone in the top 1000 of politics (like a senator) might look nice for the ordinary guy, but spare change compared to the income of the business top 1000. To calculate the average income in politics you must include everyone including the failed candidates (who spent a fortune on the campaign) and the volunteers (who get nothing by definition). I dare to say that an average person in politics earns significantly less than minimal wage.

Why does it matter in the question of authority? Because it means that people in power positions can't hurt the little guy in EVE. Imagine that corp leader kicks random member over not kissing his butt: he'd lose one fleet member who protects the corp assets (which are more or less corp leader assets) and he'd lose an income source (taxes), while the pilot loses nothing, assuming he kept basic security measures and did not put too much of his assets at the mercy of the corp. Imagine that I'd be kicked from TEST for insulting someone of authority: TEST would lose 20B/month, would lose one logi pilot and lose a busy industrialist who'd give lot of jobs to other members. On the other hand I'd lose nothing financially as I get nothing from TEST. They couldn't station-camp me, because my nullsec pilots never undock for any other reason than helping TEST. They couldn't shoot my assets as I have none, I make trivial ISK in TEST space, I make my ISK in highsec like everyone else. They can only kick, station camp, destroy their own assets, since everything I brought to null is a donation to them.

The same exists in real life capitalism where the personal rights and property cannot be taken by the government. The "people of authority" can fire you from your governmental position or get you excluded from parties, but can't stop you from earning money as a little guy. They practically kick one of their volunteers who was working to help them. This is smart only if the mentioned guy was a spy or saboteur, but if he was a honest supporter, kicking him does no good (just ask Romney how much the "47%" speech helped him).

The only people who has something to fear from the "people of authority" are those who make their money (ab)using the system, for example someone who rats in a titan and doesn't pay for the security that the alliance provides. He is freeloading on the alliance and this can be taken from him. If he wasn't freeloading but paid properly for the security that the "all hands on deck, blue super tackled" jabber channel provides, kicking him - again - would only hurt the alliance.

In short: financially "the system" gives nothing to members (except freeloaders), the members donate to the system. Therefore the authority figures just hurt themselves by kicking non-destructive members.

Of course it doesn't mean they wouldn't do it. Most social people gladly give up money for social status. Ruining whole coalitions over a Falcon or "pets don't talk back to -A-" are great examples when one was ready to seriously hurt himself just to show who is the man. However their examples exactly show that their "victims" ended much better off than themselves. The "pets" who don't talk back are either in the HBC or in a newly forming coalition that has promising plans. It is possible that one day someone gets enough ego and power in TEST to do something like that and get away with it (instead of being kicked as blue...killer). However that would be the undoing of HBC and not of the members he rages out. He would use his newfound power again and again turning into a perfect Makalu. The members will easily find a new home where their volunteer contribution is welcomed. It's always the economy stupid!


More nullsec screenshots. The cleansing of Esoteria of botters is going well: 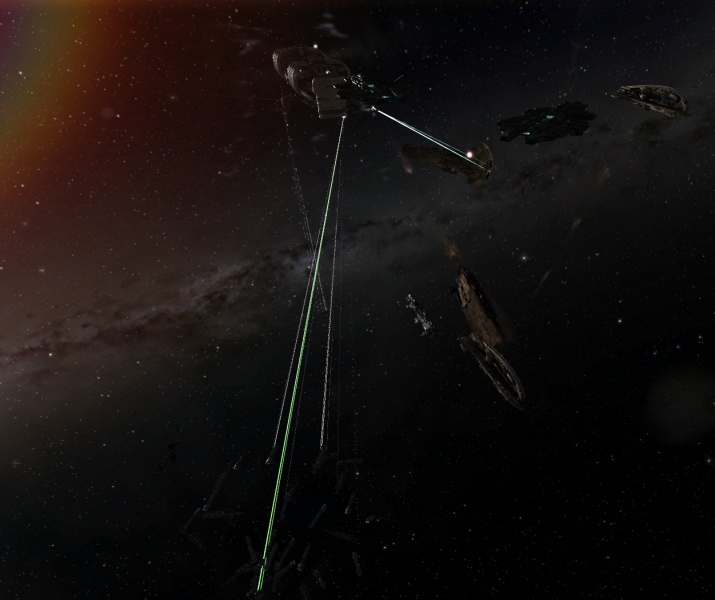 Have you heard of the "overview bug"? It shows a friendly ship neutral and in EVE people shoot neutrals without hesitation. Of course you can check other data (like corporation name) to see if the neutral is really a neutral. If you see a bug, call it out to tell your more trigger happy members to not shoot the ship. In our case, the show up of the "neutral" caused some panic: 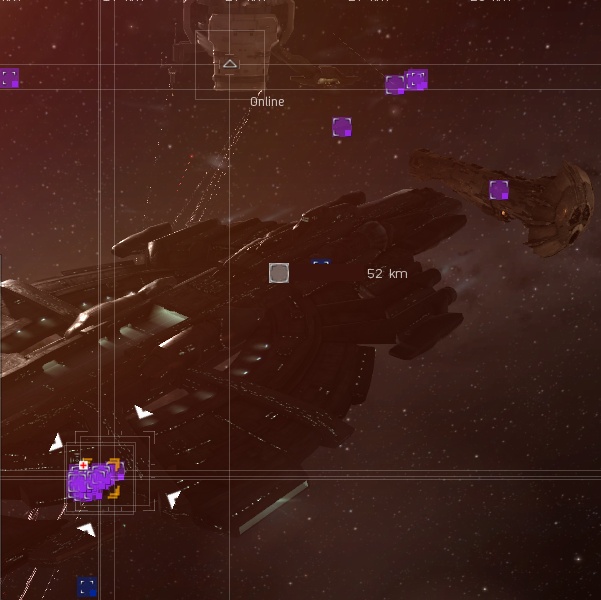 The "neutral hotdropping" Nyx belonged to another member of the HoneyBadger Coalition, The Initiative. They came to kill the same IHUB as we. So we joined our fleets and rampaged over Esoteria, clearing up half dozen systems: 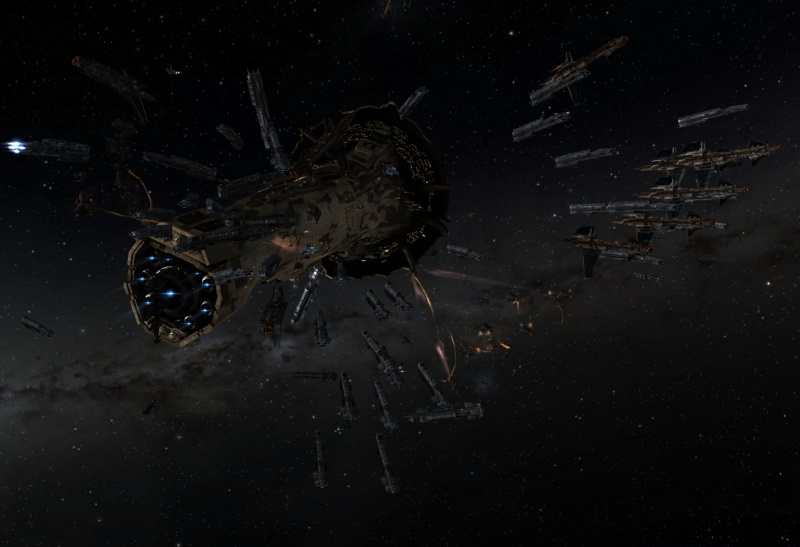 If you (specifically) get kicked from TEST you don't lose "nothing." You lose the ability to participate in in-group activities with the group that you define as being most successful in null.

Surely you're not playing this game just to make ISK anymore.

If I'm kicked from TEST over someone getting Makalu position, do you think I actually want to be there or keep considering TEST a group that has a perspective of success?

No, I wouldn't just hoard ISK, I'd go and find the next candidate for "best group in EVE".

What makes you think everyone who wants to kick you is another Makalu in the making?

One day TEST leadership may decide the cost of you disrupting their cultural cohesion outweighs benefit of receiving 20b a month.

If TEST were to fall apart if you moved your money elsewhere, then they were never as successful as you made them out to be. Far more likely they'd stand to lose nothing important with you gone, while you'd be stuck with no way to participate first hand in their success.

In EVE, the way to get rich is being mediocre and irrelevant. Live in highsec or Minmatar FW and farm all by yourself (with your alts). Some do it by a semi-AFK mining fleet, others are running missions for LP, some trade. Each and every one of them has zero effect on the EVE story and very minimal effect on the life of others.
I disagree with this as your core premise as evidenced by the fact that you devoted some months of your blogs talking about faction warfare 'exploits' (which were not exploits) because it was directly impacting you (and conceivably other traders who follow your methods).

Those FW pilots and alts are obviously impacting you.

Similarly your constant activity in Jita apparently makes things cheaper for people as you drive off the 0.01iskers...

Every single profession in eve is interwoven because the core of the game is the player driven market.

The rest of your post is built on this straw man and doesn't bare analysis.

@Anonymous: the ONLY alternative of a "Makalu" is the rule of the law. The leadership make clear rules and keep these rules. Of course the rules can and often need to be changed, but the change and the new rule must be articulated.

When someone can be kicked for no rule breach, then ANYONE can be kicked. Then anyone can fear that he can be kicked if someone "important" (by definition a "Makalu"). A coalition held together by fear is exactly what -A- demonstrated to be destined to fail.

The easygoing "no f... given" culture of HBC is based on exactly that no one needs to thread on eggshells, no one need to think "will this act or word infuriate X?" nor "doesn't X mean that I should be doing Y"?

Obviously, the loss of one member (even a 20B/month one) won't kill a coalition. The message "if you talk back to X, you're out" would kill it.

You might be interested in the concept of rent seeking. Rent seeking is when someone lobbies for rule changes that would lead to the rules being tipped in your favor.

For example, if an industry is difficult to enter then companies in that industry can charge higher prices. If the industry is heavily regulated, then it may be difficult to enter. So an industry may lobby for additional regulations (e.g. cosmetologists lobbying for licensing requirements) - that is rent-seeking. Of course, everyone claims that they're not rent-seeking, and the regulations are necessary and important. They try to muddy the water.

If someone on CSM were to lobby CCP to change the rules in some way that secretly benefited them, that would be rent-seeking. For example, someone who leads a large alliance might campaign for more tools to make large alliances difficult to topple.

In the real world, most rent-seeking is done by small organizations with large financial motive. The american population would benefit from, say, eliminating price supports for milk - because lots of people drink milk, and the price would drop. But it wouldn't drop very much, so people aren't very interested. The large diffuse interest loses politically to the small group (the dairy farmers) with a lot of financial incentive.

Gevlon, members don't need to break a rule to be kicked from TEST or the HBC. Time and time again individuals, corps and even whole alliances have been removed purely on the basis that they "didn't fit" culturally. They broke no established rules, they were simply removed because they do not fit in.

You have access to our wiki, you should consider browsing the pages about our history. Look for corps, alliances and major "personalities" that have been kicked and blacklisted for no other reason then because they don't "belong".

I have personally blacklisted people just because they were "dicks". Your argument that members are safe as long as they do not break any established rules is not based on reality.