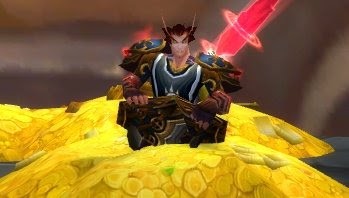 I wrote in a recent post to "Never ever start to teach him [a poor person] AH businessman-ship. While the AH skills are just as obvious for us as breathing, he completely lacks these skills". Yet I never thought of what these skills are. No they are not the ones I list among essentials, they are needed to be a successful businessman. I'm talking about those hard-to-define skills you need to be a businessman at all.
In a comment, miucat spotted one. I thought a lot about them and found another 4. Maybe the list elongates. Comments are recommended and will be included in the post.

1: Opportunity cost. If you kill a random monster and loot the BoE [Ring of Uberness], and equip it, no money transition happened, so you were just lucky today. NO! There are two financial actions happened in a short time. You performed a work (killing the monster), that yielded the item (profit) worth exactly as much gold as the item usually has on AH.

Secondly, you bought the item from yourself for this price for usage. By equiping it, you abandoned the chance to sell it, so abandoned the gold you could get for it. Of course you are free to buy from yourself, but would you buy the same ring for the same price from anyone else? If not, you did something dumb!

Next time, determine the price of the item and if you would not pay this price for the item, don't buy it from yourself. Sell it to someone else! For every businessmen, it is obvious. If it's not for you, start practicing, or you end up poor!

2: Convertibility. Many times when someone is out of money, his bank (and bankalts, and bankalts's guildbanks) is full of stuff. Sellable stuff. Yet they are pretty reluctant to sell it. The common reason is "what if I need it later?" Well, you can always buy it back for the same money! (assuming prices don't change).

So if your bank is a mess, you are most probably poor too. Go cleaning! Go starting to get rich! Sell everything what you don't plan to use in the near future, or don't have a good reason to believe that will have its price increase! All my personal stuff fits into one bag on my back and two bags in my bank. Everything else in my bank makes me money one way or another (enchanting, inscription stuff, items bought to be sold higher).

They do it because they see that their heal decrease. Every businessman would instantly notice that their "competitors", the CoH priests lose much more, so the position of restodruids became much better against CoH priest (granted, they lose position against resto shamans).

4: Perfection vs "good enough". A post on World of Matticus is perfect example of non-businessman thinking. Practically every reputation was described as "must be exalted" because of 1 or 2 items. There are also huge list of "pre Naxx gear" on different sites, giving advices how to farm "the best" gear before Naxx. However Naxx can be very vell conquered in blue, unenchanted gear. So even my crafted set was an overkill, if you reached 80 by questing and doing normal lvl75-80 instances, you are good to go. Time spent on getting "better" gear is wasted from the point of progress. While you spending your time farming rep, the other guy, who applied to a raiding guild is already cleared Naxx, and got better gear from it.

For a businessman being "good enough" is enough. If you have what it takes to do the current task, you are good. Any other resources spent on that task is wasted. One huge reason of the poorness of the poor in WoW is the money wasted on maxing professions and the time wasted on grinding rep instead of farming materials for sell.

5: Trusting in the market. Poor people try to craft their own gear by themselves or alts, or at best guildmates. This force them to farm recipes and rep for these recipes, level their tradeskills high. Of course it is huge money waste. Businessmen specialize. They create things for profit and buy everything else from the markets. I have Earthgiving boots, Earthgiving legguards, Titansteel guardian, Moonshroud gloves, Moonshroud robe, Wispcloak, Titanium Spellshock Ring, although I'm not leatherworker, not (high level) tailor, not blacksmith, not jewelcrafter. If I would level alts to be able to craft all these, I would not have the money to craft these.

So a businessman don't only rely on himself, he trusts that others also create useful things and they can sell to each other. Poor people try to make everything for themselves, no wonder they remain poor.
at 07:00

Lack of understanding of opportunity cost is also why so many people like to farm for mats. They don't get that "time is money" and they think that flying around for 1 week gathering ores makes their blacksmithing epic free. "It normally costs 2k on the AH but I farmed the ores myself". Bad news, it still cost you 2k...

The part on being "good enough" is also spot on. Matticus is a hardcore raider, thus he has the typical hardcore mentality. Unless your tank regularly goes below 200hp when tanking a raid boss, getting an item with +20 stamina is worth absolutely nothing as long as he has enough to make a comfortable buffer. This difference won't save you from raid members who are unable to follow directions i.e. brains > gear after a certain point, and that point is very easy to reach in WotLK.

Awesome post, real insightful gems in here. I follow your blog almost daily, and have always found you a giver of sound advice. Keep it up!

I know the English wasn't perfect, but the point of this blog is brilliant.

People who dissect imperfections such as minor English errors most likely wont benefit from these enriching tips/advice.